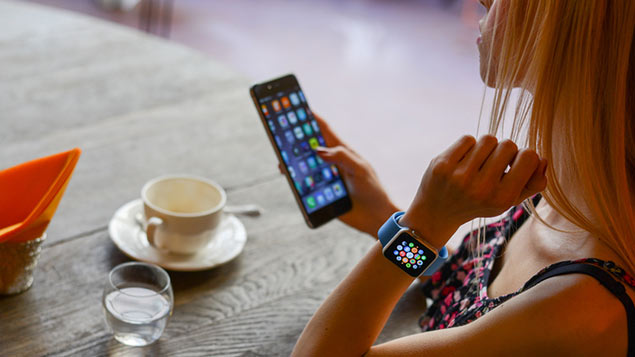 Sales of “wearables” such as smart watches will treble next year, analysts predict. But how can employers harness the trend responsibly, asks Cath Everett?

Although 2014 was predicted by some to be the “year of the wearable”, in practice it may take a little longer before these portable nuggets of technology become fully mainstream.

While the release of Samsung’s Gear smart watch at the end of 2013 and the Apple Watch a few months ago helped to up the profile of such gadgets, the market is still very much in its infancy.

Determining the costs of employee wellbeing

Not only is the technology still relatively expensive, but its potential applications are currently very limited, with the majority focusing on sharing messages, GPS-based navigation systems or, most popularly of all, monitoring health and fitness.

Nonetheless, industry watchers Juniper Research believe that wearable tech’s day will come soon enough, predicting that the market will generate $53 billion in hardware revenue by 2019. By next year, it says, global sales will treble compared with 2014.

Driving this increase will be sales of smart glasses and smart watches, the latter of which Juniper forecasts will replace dedicated fitness wearables by 2017. The healthcare sector in particular is set to boost adoption, it says, as the business case for their use is so much clearer than in other areas.

Some organisations are already starting to deploy wearables as a means of encouraging their employees to get fit. Dr Emmanuel Tsekleves, a senior lecturer in design interactions at Lancaster University (who also works at its Imagination Innovation lab), cites the example of BP.

The company has introduced a pilot project in which any employee can sign up for a free Fitbit activity tracker. In return, they agree to the company using their personal data, ranging from how much exercise they have taken each day to their sleep patterns, the aim being to link the metrics around staff wellbeing into the firm’s health insurance scheme.

“There are a few companies that are doing this, but the motive isn’t so much having really healthy staff as lowering their insurance premiums, as far as I can gather,” Tsekleves says.

But there are other potential benefits for employers too. There are already proven links between health and wellbeing and employee engagement, productivity and even retention. (The software company SAS Institute, for example, reported voluntary turnover of just 4% after introducing an employee wellness programme).

Dealing with health and wellbeing issues tends to be a bit more complex than just getting people to run around – the approach needs to be more holistic,” Dr Nick Summerton, Bluecrest Health Screening

But before you all rush out to buy armfuls of activity monitors, Dr Nick Summerton, a GP and medical director at Bluecrest Health Screening, warns that wearable tech is far from being a “silver bullet”.

He believes that there is currently “a bit of a bandwagon” around it all, not least because of the lack of evidence that such devices actually do what they are designed to.

“I think it’s a very important development, but people have a tendency to be blinded by technology and you have to be careful,” Summerton says. “So my question would be where is the evidence of its effectiveness? You can’t use medicines until there’s evidence that they work and the same needs to apply to apps too.”

Although this situation will presumably change over time as more research takes place, another issue is the narrow band of information that wearable devices actually provide. Older workers, for example, may suffer from quite complex health problems, unlikely to be solved by devices only focusing on one or two areas, such as heart rate or sleep patterns.

“Dealing with health and wellbeing issues tends to be a bit more complex than just getting people to run around – the approach needs to be more holistic,” Summerton points out. “Encouraging exercise is good but personal monitoring can get complicated – and can even be harmful as some people get obsessed.”

Tsekleves agrees. In his view, what is missing at the moment is being able to combine fitness information with other meaningful data, so that users can get “actionable insights”.

“For example, you might be able to see that you had a lot of REM sleep between 1am and 5am, but it doesn’t tell you why. Actionable insights lead to behavioural change and that’s currently not happening,” he explains.

At the very least, such insights should make usage more sustainable and less novelty-driven into the long-term.

But Simon Shepard, chief executive of health and wellbeing services provider Optima Life, argues that it is important not to get “too carried away simply measuring things”.

Instead he believes that it is about keeping the end goal in mind, bringing about organisation-wide cultural rather than at an individual level as it is here that the biggest impact on engagement and productivity will be gained.

One organisation that has been attempting to derive some meaningful data from wearable technology, meanwhile, is data science consultancy Profusion.

It set up a 10-day pilot project earlier this year, in which 31 of its 56 staff agreed to have their digital activity recorded, their vital signs measured by FitBit devices and their location identified using an iPhone app.

Participants also filled in a survey every three hours detailing what they had eaten, what mood they were in, how stressed they felt, etc.

The aim of the exercise, according to chief executive Mike Weston, was to try and establish the impact on individuals of being subjected to such high levels of scrutiny. What became clear was that people reacted in very different ways based on their personality type.

Some found that keeping track of their heart rate and stress levels made them feel more in control, which in turn made them feel happier. Others found it brought out their competitive side, which resulted in one group getting together to set up a leader board based on the number of steps that each of them took each day.

However, a select few found the entire process very anxiety-provoking. This situation resulted in them burning more calories as their heart rates increased – just not necessarily in a good way.

Summerton makes an interesting point here. It is well known, he says, that once individuals are labelled as having high blood pressure, being overweight or whatever, a common unintended consequence is that they often take more time off work.

Be transparent about what you’re gathering and use a similar framework to that used for customer data.” – Mike Weston, Profusion

As Weston points out: “Technology like this can play a very positive part in a well thought-out wellbeing scheme, but you have to be mindful about how people will react to the information they receive and make sure they don’t start drawing conclusions that might not be supported.”

Other vital considerations, meanwhile, include the issue of employee privacy and the risk of data abuse. Weston, for example, said that all employee data used in his company’s trial was anonymised.

“It raises some interesting questions as there are a number of potential ramifications in terms of things like promotional prospects and health insurance,” he says.

“The thing I’d say though is be transparent about what you’re gathering and use a similar framework to that used for customer data – so you can only hold information if it’s relevant and people can demand a right of inspection.”

Moreover, schemes should only be run on an opt-in rather than compulsory or coercive basis.

A final point to bear in mind is that, while wearable technology will only grow in popularity, it is only one, albeit shiny and new, tool in a toolbox of tried and tested measures.

These range from ensuring canteens offer healthy meal options to encouraging people to use the stairs rather than the lift, or promoting cycle loan schemes as part of a menu of benefits.

As Summerton concludes: “It’s about ensuring there’s a sensible balance. The risk is in becoming obsessed with the new because it looks like the answer, but these things never are. They might be part of the solution, but they certainly won’t be the whole one.”