Elitist Britain: What can organisations do to improve social mobility? 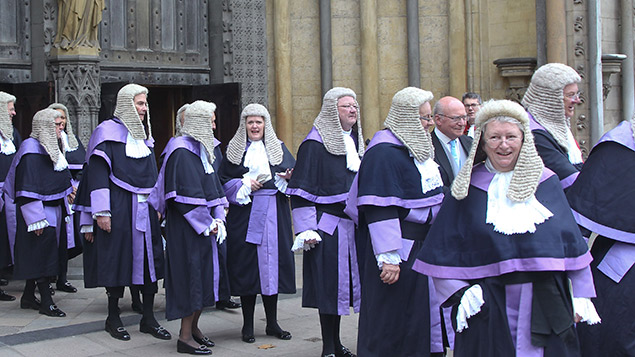 71% of senior judges went to private school, compared with 7% of the public as a whole. Photo: REX

Earlier this month, a government report revealed how senior public service posts are still dominated by a privately educated elite. David Johnston, a member of the commission that produced the report, looks at what can be done.

The Elitist Britain? report from the Social Mobility and Child Poverty Commission contains stark statistics, and reveals that unrepresentativeness is not just a problem in politics.

Rather than give up hope, the commission has issued a call to action for all key players in how the country functions, and that includes business. Excluding those educated abroad, the report found that 41% of FTSE 350 CEOs and 60% of the Sunday Times Rich List were educated at private schools.

That is at the top end of business, but who you recruit at entry level plays a big part in who can rise up. Here we see a number of hurdles that unintentionally act against those from less-privileged backgrounds. These hurdles are most often present in our top professions, but some of these hurdles are common elsewhere.

Where internships are offered, they ought to be well advertised and paid, as when they’re not, they rule out the vast majority of the country that cannot afford to support itself unpaid.”

One big area is the degree to which organisations reach out to schools. Yes, every business will tell you they do this; but what is the coverage like? In Tower Hamlets you are deluged with City firms wanting to work with you; in Brent and Hounslow you might as well be in Sunderland for all you will see of the City.

The same happens in Scotland where the Glasgow-Edinburgh corridor sees most of the action and the rest of Scotland sees very little.

Much of this activity is not evaluated for its impact and is very often restricted to one-off events that make good pictures for the corporate social responsibility review. So the first area for improvement from the commission’s point of view is ensuring that school outreach is well targeted and genuinely offers activities to those that need it.

Activities should be varied and feature long-term engagement, such as a mix of mentoring and placements, and should be evaluated accordingly.

A related area is work experience, with many businesses still reserving this for relatives of employees and clients and yet looking for evidence of it when assessing candidates for permanent roles.

You will never stop personal connections leading to work experience – and the commission does not seek to – but we do say do not make it all you do.

Where internships are offered, and actual work is being completed, they ought to be well advertised and paid, as when they are not they rule out the vast majority of candidates in the country that cannot afford to support themselves unpaid.

In a recent three-year period, 83% of those who became journalists did some form of work experience or internship – the average length was seven weeks – and 92% were unpaid. This helps contribute to the 43% of newspaper columnists who were educated at private school.

A third area is ensuring that you have well-structured, non-graduate routes into the profession. Recent decades have seen some professions become graduate only, but the reasons for this are unclear when a degree does not seem obviously necessary to do the job.

Whatever the reasons, not having a degree prevents talented people who have taken a different path from being seen on an equal footing to those who could actually do the job just as well, given the chance.

Work experience and internship survey: a question of pay

Some businesses have taken welcome steps to open up non-graduate routes, such as the “big four” accountancy firms, but it is important that such routes also allow comparable progress up the career ladder to graduates.

A fourth area is the recording of data on the profile of your workforce. In an effort to tackle gender and racial/ethnic diversity, this data recording is key: how can you know all parts of your business are open to all unless you have information on who is currently in it?

Then there are voices implying sinister motives; they should be ignored. Some businesses are already doing this, the legal sector having stolen a march.

Asking candidates a basic set of three questions about the type of school attended (breaking state down into selective and non-selective), whether or not your parents went to university and whether or not you were ever eligible for assistance such as income support or free school meals can help provide a really good impression of the parts of your business that do not seem to be entered by those from lower socioeconomic groups. Once you know what these are, you can work out why.

The “why” leads to the fifth big area of action we would like to see from businesses, around selection processes. Many companies unthinkingly follow a similar approach to recruitment. They focus their activities on a small number of universities, typically 10 to 12 from within the Russell Group and they count prospective employees’ academic achievements at GCSE, A-Level and degree.

They might get the candidates to do some tests and an interview to see if they are the “right fit”. None of these are unreasonable in and of themselves, but they take a one-size-fits-all approach that ensures people from certain backgrounds will always do better than others. For example, the GCSE and A-Level results are not given in the context of the school or college attended, so the person at a failing school is judged by the same standard of someone at a top private school.

Nearly half the applicants who get the top A-Level grades go to universities outside the Russell Group for a variety of reasons and so they are missed when just 10 to 12 are targeted. In the interview room, a vague notion of “what our clients expect” can mean someone is ruled in or out, which could mean judging aspects from what someone is wearing to their accent, rather than how well they can actually do the job.

We want to see achievements placed in educational context, an increase in the number of universities targeted and a more subtle approach to recruitment that separates ability from polish, recognising the things that you can train someone in if it seems they could do the job well.

Falling through the cracks

Monitoring the stages at which people are falling down will also help to ensure action can be taken to remove unintentional barriers; some firms find that particular groups do worse in their online tests, for example.

The key reason for doing this is to increase the pool of talent available. Those that have been brave enough to look at the performance of employees have found little to no correlation with all the things they insist candidates have, such as certain GCSE, A-Level and degree grades.

Such things are kept in place due to a perception of avoiding risk, yet the opportunity presented by taking some of the steps above could add significantly to employers’ bottom lines.

2 Responses to Elitist Britain: What can organisations do to improve social mobility?