The leaving collection: the end of the whip-round? 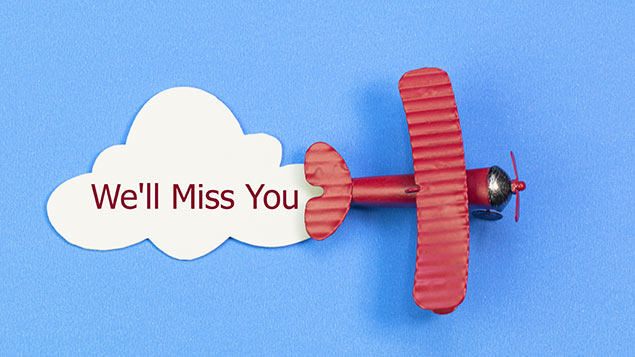 The traditional collection for a departing colleague faces an uncertain future – is it dying out? Can HR do anything to influence employees’ generosity? The Royal College of Nursing’s David Cooper has a whip-round to find out.

While Premier League executive chairman Richard Scudamore will receive a £5 million leaving present after each football club agreed to contribute £250k, the generosity of colleagues in the workplace may nevertheless be on the wane.

Five or 10 years ago, news of an organisational legend’s imminent departure, whether through retirement or restructuring, would result in a card and collection covertly circulating the workplace.

Established practice when I started working in the 1980s in the corporate world was to sign the card, deposit a pound, a fiver or perhaps £10 if you really knew and liked the person, in recognition of their 20-30 years’ service. A contribution to acknowledge their loyalty to the business, to the department, to their ability to adapt as the organisation changed around them.

A few weeks ago, one such organisational legend announced he would be leaving and a huge card arrived on my desk along with a large but worryingly lightweight envelope.

As I signed the card and deposited my contribution, I saw numerous good lucks and goodbyes, genuine sentiments of recognition for his work from a wide range of people.

The amount of money collected, however, was paltry. In fairness, I have grown to expect it. I have been seeing this for a while – people signing the card but not parting with much cash. Collections seem to me to be dwindling year on year.

The days of collections easily surpassing £100 seem to be over. Just like the departing “dinosaurs”, are leaving collections facing extinction?

While I have only anecdotal evidence of this decline, I have a few theories on what might be the cause. Surely it’s not because people don’t care? Or because they don’t have the money to spare?

My hunch is that such legends are no longer held in particularly high esteem. Their younger colleagues would be far less likely commit to one organisation for so long and so longevity garners less respect.

Perhaps it’s a broader generational, societal issue. Colleagues in their 20s and 30s typically have student debt, struggle to get on the housing ladder and have inferior pension provision, so perhaps it is a combination of affordability and their perception of their older colleagues’ relative wealth. It may also be at the back of their minds that the leaving do at the pub will be expensive: in some parts of the UK over £5 a pint.

But do the young really give less? I could not find any specific research into leaving collection generosity but according to research by Barclays in April 2018 into the age of donors, charities do perceive this to be the case.

Colleagues in their 20s and 30s typically have student debt, struggle to get on the housing ladder and have inferior pension provision, so perhaps it is a combination of affordability and their perception of their older colleagues’ relative wealth”

Asked which age bracket forms the basis of most of their donations, 63% of charities point to the over-50s. More than a quarter say the 30 to 50 age group are most important, while only 1% of charities surveyed cite younger people.

The same report, however, showed that, when the people themselves are asked how much they give to charity, people in the intermediate age group report giving the most over the past year – an average of £265. The under-35s gave £246, far more than the £168 average of the oldest donors.

It’s also the case that fewer people are likely to be in the office to actually make a cash donation; Office for National Statistics figures suggest that the number of UK workers who have moved into remote-working has increased by nearly a quarter of a million in a decade. And by 2020 it is forecast that half of the UK’s workforce could be working remotely. Not only will people not be in physical proximity but, more importantly, with fewer opportunities for small talk they won’t feel as if they know the departing colleague well.

This leads us to how people give and possibly a technological solution to our troubled collection for the leaver. In 2017, the top way to give to charity was still on the street (48%), followed by the raffle (46%). But in third place was JustGiving, the website you’ll no doubt have used to sponsor someone running a marathon or the like. Not surprisingly the younger generations are more likely to donate online.

So if you recognise the scenario, perhaps herein lies both the heart of the problem and the solution. Cash is in decline. The number of withdrawals from cash machines has been falling steadily since 2012 as consumers favour the convenience of contactless cards – no wonder people aren’t as generous, their purses are empty!

Indeed, a bit more digging and I discover that apps already exist to help create a collection – PayPal launched something called MoneyPools last year and there are a handful of other similar products all vying for our whip-round business. Virtual collections for virtual teams!

Good organisations that care still say farewell to loyal staff and, if there’s a healthy workplace culture, their colleagues undoubtedly care too. Perhaps colleagues just need a gentle nudge in a digital direction to ensure that the leaving collection coffers don’t dry up.

4 Responses to The leaving collection: the end of the whip-round?