By Sarah Silcox on 1 Nov 2013 in Research, Occupational Health 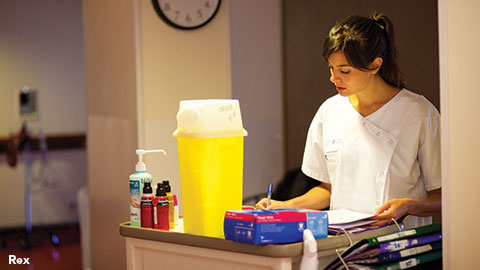 Excessive working by fathers is positively associated with subsequent workaholic tendencies in their adult children, according to a recently published study of 146 families. Using structured questionnaires and logistic regression analysis, the researchers concluded that fathers with high scores on the “excessive working” scale are more likely to have adult children with the same tendencies.

Kravina L et al (2013). “Workaholism and work engagement in the family: the relationship between parents and children as a risk factor”. European Journal of Work and Organisational Psychology, published online 17 September.

Working night shifts carries the risk of considerable job strain, according to a study of Italian nurses. Night-shift working is associated with a greater risk of high job demands and lower job control, or decision authority. Nurses working night shifts reported higher incidence of various health symptoms, particularly exhaustion and gastric pain. However, there was no association between particular working patterns and job satisfaction scores among the nursing staff in the study.

Excessive workload is associated with greater work-to-self conflict, and this in turn is a predictor of psychological distress one year later, according to a longitudinal study of 471 Japanese employees with young children. However, having a supportive supervisor is positively related to personal functioning, the researchers concluded.

The fit note – particularly its positive language, interrogative format and biomedical authority – is helping people with chronic pain return to work, according to a qualitative study. However, employers’ frequent enquiries after an employee’s health status was seen as intrusive by some staff, but was considered good practice by employers, and the researchers concluded that “acknowledging this difference was useful”. Employees with chronic pain who felt valued were more motivated to return to work.

EAP coverage in the US

The coverage of employee assistance programmes (EAPs) in the US increased between 2009 and 2010, according to an analysis of a sample of 26 EAP providers. Programmes focusing on mental health saw the most growth, although researchers also discovered that few of these programmes were accredited and only a small number of counsellors operating in them held a recognised professional accreditation. On average, less than 6% of employees with access to an employer-sponsored EAP in the US used it.

A timed obstacle course used to test the fitness of police candidates is not gender neutral and also fails to screen out overweight or obese men, according to an analysis of 1,701 police candidates. Only 7% of male candidates failed the test, compared with 42% of females. Errors made on two obstacles in particular (the “body drag” and “gate weave”) accounted for half of the total obstacle errors made by women. Success on the course was significantly associated with young, tall but heavy male candidates, prompting the authors of the study to conclude that the obstacle course is unfair to women and favours overweight or obese male candidates.

Work-related head injuries could be a risk factor for Parkinson’s disease, according to a case-controlled study of more than 800 Canadians. Individuals who reported a head injury were asked about the circumstances of the accident, including whether or not it occurred at work. Associations were strongest between Parkinson’s and injuries involving concussion and unconsciousness, and work-related injuries were associated with the strongest risk – although the sample size meant that estimates for this part of the research were not statistically significant.

A health board in Scotland has been fined after a worker was attacked while making a home visit to a patient with mental health issues. The community psychiatric nurse has experienced “flashbacks” following the incident, during which she was forced to the floor and threatened. At the time of the attack, there were no risk assessments in place for community teams dealing with potentially violent clients or for lone working in clients’ homes. The health board failed to appropriately manage the risks associated with health workers making home visits on their own to clients with a known history of aggressive behaviour. The employee concerned was not trained or supervised properly to deal with a patient who was known to have violent tendencies. Lothian Health Board also failed to report the incident to the Health and Safety Executive within 10 days, as required by law. The employer was fined £32,000.

An employee of a pharmaceuticals company was sprayed with seven litres of bromine as he removed cables from a valve connected to pipework and spent 48 hours in a life-threatening condition after inhaling the substance and suffering severe burns and damage to an eye. A Health and Safety Executive (HSE) inspection found that pipework at the plant in Northumberland was inadequately supported and bolts were badly corroded. The firm was fined £100,000, plus £7,803 costs, after pleading guilty to health and safety breaches. HSE inspector Graham Watson said: “All employers – and particularly those handling dangerous chemicals – must not assume a lack of previous incidents means risks are adequately controlled. Measures must be in place to ensure, through robust audit and review, that this is because of effective management and not just good fortune.”