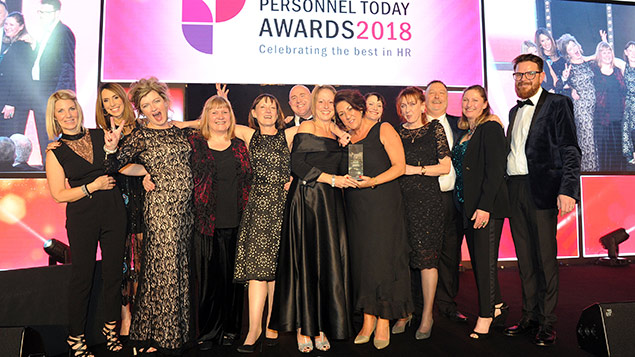 University Hospitals of Morecambe Bay NHS Foundation Trust scooped the “best of the best” award at this year’s Personnel Today Awards for a major culture change programme that boosted morale.

UHMBT won the overall winner award having also picked up the Employee Engagement Award, one of 20 other winners announced tonight.

After a troubling period when UHMBT had been subject to an investigation, staff at the Trust were understandably disengaged and dissatisfied. But after putting what judges described as “their heart and soul” into a comprehensive change programme, the HR team received praise for driving a “palpable” improvement.

The audience was entertained by stand-up comedian and star of Live at the Apollo, Simon Evans, before regular host of The One Show, Alex Jones, hosted the Awards ceremony.

It was a double win for William Hill, who were the recipients of the HR Team of the Year Award, sponsored by PeopleScout, having steered the company through a major restructure. William Hill HR director Louise Benford was also named HR Director of the Year.

The awards shone the spotlight on the best youth employers too. The Graduate Scheme of the Year Award went to Unlocked Graduates, a charity attracting high-calibre graduates to work in HM Prison Service, and Apprenticeship Employer of the Year went to the London Borough of Croydon.

Rob Moss, Personnel Today’s editor, said: “Tonight’s winners prove that – despite all the current uncertainty around Brexit – HR teams can really deliver value for their organisations and bring about lasting change.

“Congratulations not just to the winners but all of those shortlisted as the quality was exceptionally high this year.”

Diversity & Inclusion in the Public Sector, sponsored by the Guardian Jobs
St Mungo’s

HR Team of the Year, sponsored by PeopleScout
William Hill

Award for Excellence in HR through Technology, sponsored by Cezanne HR
Royal Bank of Scotland

Apprenticeship Employer of the Year
London Borough of Croydon