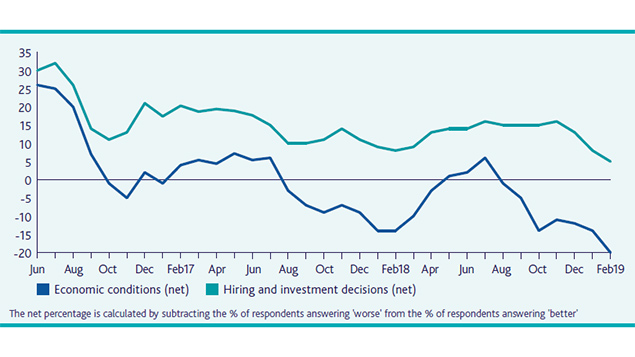 Employers’ confidence in the UK economic prospects hit a three-year low last month, according to the Recruitment and Employment Confederation’s JobsOutlook research.

The REC’s index, which asks employers whether they think economic conditions are getting better or worse, fell 6 percentage points to -20, the lowest since the recruitment body began measuring economic sentiment in June 2016 when the level was +26. The index is calculated by subtracting the percentage of respondents answering “worse” from the percentage answering “better”.

With employers’ confidence levels at a low point and hiring intentions for both permanent and temporary staff dropping in today’s survey, there can no longer be any argument – uncertainty is damaging for job creation” – Neil Carberry, REC

This weakening trend appears to be affecting employers’ hiring decisions. Confidence in making decisions around hiring and investment declined by 3 percentage points from the previous month to net: +5.

Neil Carberry, REC chief executive said: “With only a month before Britain is due to leave the EU, businesses across the country are clear that they need clarity about the plan for after the end of March. That must mean a smooth move to a Brexit deal – not a dangerous no deal experiment.

“A sensible approach will underpin strong growth in jobs, which UK employers have a record of delivering, including in the survey we publish today.”

Exactly half of employers that hire permanent staff expressed concern over the sufficient availability of candidates for permanent jobs, 9 percentage points higher than a year earlier. Employers in the engineering and technical, health and social care and hospitality sectors anticipated the severest skills shortages.

Carberry added: “Recruiters are helping employers to find the staff they need – especially in key sectors of shortage, like engineering, healthcare and hospitality. But with employers’ confidence levels at a low point and hiring intentions for both permanent and temporary staff dropping in today’s survey, there can no longer be any argument – uncertainty is damaging for job creation.”

The picture for temporary hires was similarly negative. In the short-term, the balance of employer sentiment to hire agency workers on a temporary basis fell by 9 percentage points from the previous month to -6, returning to negative territory for the first time since November 2017.

Sentiment in the medium term was 10 percentage points lower than in the same period last year, and the lowest since REC data began in June 2016.

One quarter of employers intending to hire temporary workers expressed concern over whether there was a sufficient number of agency workers with the skills required, down from 32 per cent a year earlier.

The monthly JobsOutlook is produced by the REC in partnership with ComRes, which interviewed 611 UK people involved in hiring between November 2018 and January 2019.