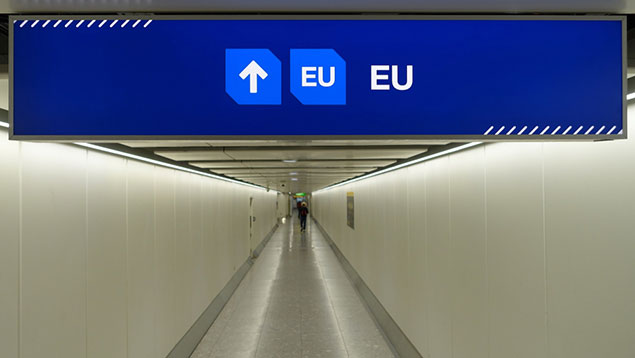 Significant changes in migration patterns were revealed today in the latest Office for National Statistics figures, causing serious concerns for recruiters in the public and private sectors.

Although the net number of EU nationals coming to the UK slumped to a six-year low of 74,000 in the year to June 2018, the ONS figures suggested that non-EU net migration was at its highest level since 2004, with 248,000 more non-EU citizens arriving than leaving – a figure that has been challenged by some experts.

NHS alarm at supply chain and workforce implications of Brexit

The ONS report stated that the decrease was largely accounted for by a fall in the total number of EU citizens arriving looking for work, with 37,000 in the year ending June 2018, down from 82,000 at the peak two years earlier.

Recruiters’ professional body, the Recruitment & Employment Confederation (REC) stated that the ONS figures on net EU migration should be deeply troubling for organisations.

REC director of policy Tom Hadley said: “REC data shows that candidate availability is declining month on month, and that 75% of employers have little or no capacity to take on more work without needing to hire more staff. The shortage is acute across both the private and public sector – particularly in social care and the NHS where ensuring safe staffing levels is an absolute must.

“The public sector faces up to seven more years of skills shortages based on current demand. This doesn’t even factor in the impact of post-Brexit immigration models. Severely reducing the number of EU workers coming to the UK will make British firms less competitive and put increasing pressure on our public services.”

The British Chambers of Commerce called the decline in EU migration “nothing to celebrate” and said that the non-appearance of fresh immigration proposals were causing planning problems for business: “With just four months to go until the UK leaves the EU, it is astonishing that there is no published government policy or technical guidance for employers on the status of EU nationals, and whether firms can hire them, in a ‘no-deal’ scenario. It is also well past time that the government publishes its Immigration White Paper to provide longer-term clarity.”

The ONS figures show that net migration from the older EU member states (called the EU15), such as Germany, Italy and Spain, dropped by nearly half between June 2016 and June this year – from 84,000 to 47,000.

Jay Lindop, director of the Centre for International Migration at the ONS, said the rise in non-EU net migration was down to people coming here for work and study. Non-EU student immigration was broadly stable between 2013 and 2017 but had increased over the past year.

But Madeleine Sumption, director of the Migration Observatory at the University of Oxford said that there were doubts about the non-EU migration statistics: “Other data sources do not support the idea that non-EU citizens are currently contributing so much to net migration,” she said.

With just four months to go until the UK leaves the EU, it is astonishing that there is no published government policy or technical guidance for employers on the status of EU nationals” – British Chambers of Commerce

In a statement, the Observatory added: “The ONS has started a programme of work to improve the quality of the statistics, but these developments are mostly not yet reflected in today’s figures. Significant issues have been identified with the measurement of non-EU emigration.”

The REC released a whitepaper on the future of jobs, Public Sector 2025, recommending that various Brexit scenarios are countered by a series of measures including embedding flexible work in all areas of the sector and harnessing external expertise to drive workforce innovation, using technology to enhance recruitment supply chains and leading the way on inclusive hiring.

Hadley said: “An immediate priority is evaluating the impact that post-Brexit immigration models could have on staffing in the public sector. Employers need to take urgent action to future proof hiring procedures and workforce management to deliver quality public services.”