By Jo Faragher on 7 Dec 2012 in HR practice, The HR profession 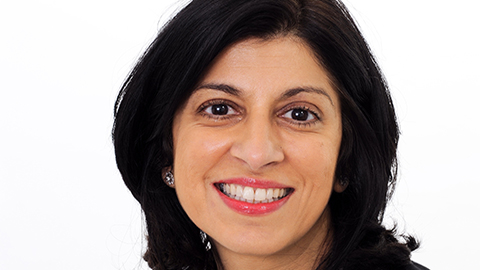 The most arresting thing about General Electric (GE) is its sheer size. Across the world, the company employs more than 300,000 people in diverse divisions, producing everything from MRI scanners to aircraft engines. Sameena Bashey, country HR director for GE Healthcare for the UK and Ireland, couldn’t help but be wowed by what she entered into when she joined the global conglomerate in 2005.

While to an outsider it might seem that her role – national head of function for just one of its many businesses – is a small one in the grand scheme of things, this couldn’t be further from the truth. In her positions as HR director for GE Healthcare in the UK and leader of its European works council, she is able to influence thousands of staff and drive change across the business. She also heads the company’s HR Council, where HR leaders from GE’s UK businesses come together to share best practice and shape HR strategy.

“It’s an extremely complex business with a heavily matrixed structure,” explains Bashey. While HR departments work in business “silos”, the importance of regular communication and sharing best practice is never underestimated. “Even though GE is huge we connect a lot across our GE businesses, especially in HR. We’re really into sharing information at GE – so if GE Capital [the finance arm of the company] is doing something that’s different, it’s very much an open business where we can reach out and learn from each other. You never feel like you only belong to GE Healthcare.”

One of the challenges of working across such a sprawling and complex business is identifying talent and developing leaders in a consistent way. A huge investment of time and money goes into GE’s “Session C” talent management process, which takes place once a year and involves all GE business leaders assessing the performance of individuals and identifying those who are ready for promotion. As with most appraisal processes, staff receive feedback based on whether or not they’ve achieved objectives and have demonstrated company values. Based on the results of this, some are promoted and stretched again, while others receive support to help them achieve their objectives. Between January and March every year, HR teams are busy matching talent to the right development programme.

Where GE is different, says Bashey, is that the results of the appraisal provide a backdrop to every piece of staff development.

“In so many companies your appraisal is done and put away. Here, it’s part of the succession planning process and it’s not just an HR thing – [CEO] Jeff Immelt will personally take an interest in where the talent is in each part of the business,” she says. In fact, exposure to key leaders in the organisation is all part of the leadership development process.

Some years ago, however, GE’s talent management methods were well known for other reasons. Then-CEO Jack Welch famously “exited” the bottom-performing 10% of staff from the business. While staff are now absolutely expected to deliver, says Bashey, the process has evolved considerably, so if you’re not coping, you’re more likely to receive some coaching and support than a redundancy notice.

“We no longer have forced ranking. We don’t say ‘we need to get rid of the 10% that are your lowest performers – because let’s face it, you could have a superstar team,” she says. “We used to only rate talent into three areas: top talent, highly valued and less effective. Now we’ve broadened that out to five areas, from ‘role models’ down to ‘unsatisfactory’. We do work to develop people, and sometimes you have to accept that someone is in the wrong job or that they need support. The culture is softer, but it’s still a meritocracy.”

In the UK, GE has almost 20,000 employees and there are many opportunities for career progression. To ensure this occurs more proactively, Bashey drives a talent-sharing process through the UK HR Council. In this forum, business leaders across GE come together to discuss their talent and identify roles that will help them stretch to the next level, even if it’s in another GE business.

“This forum is great, not only because it enables us to fill key roles, but it also ensures we retain our best people” Bashey says.

In addition, one of the company’s growth values is “external focus”, she explains: “Although we like our employees to understand how GE works, we also like people to know what’s going on in the outside world. In the past, it might have been easy to get absorbed by GE because no matter what you need, someone at GE will have the answer or some information for you. Now we encourage people to look outside more. We don’t assume we do everything right and there will always be companies that we can learn from. And sometimes, they’ll be small companies.”

While the global nature of the business means that many roles involve a lot of travel, it’s more about instilling a mindset in employees to think about their issues on a global level instead of placing them on assignments to broaden their horizons.

“When I started at GE, more than 60% of our employees were based in the US – but with globalisation and growth in the emerging markets, now approximately 40% of our population is based there. So there are greater career opportunities in the rest of the world. You can have a global role and be based in the UK, but you need a global mindset,” Bashey says.

Despite the considerable reach of the company, Bashey is still surprised when she talks to potential recruits for the HR department and discovers they do not realise the size or scope of GE: “In the US, everyone knows GE, but we still struggle with people recognising the brand in the UK and across Europe. We need to keep working on that.”

Yet a career in HR at GE could be a rewarding one, she insists: “Most HR professionals work across different industries during their career, but to do this you’ve usually got to leave the company. In GE this is not the case – tell me which other company allows you to move across so many diverse industries, but still be part of the same business. That’s what really excited me.

“The other thing that differentiates us is the role of HR at the table. For all our business leaders, the right-hand people are the finance and HR people. Business leaders expect to be working with you on their strategy and expect you to be there at an early stage – it’s not about doing something and then saying ‘we’d better tell HR’. They expect HR to influence the way the business is shaped, and that’s how it should be.”

If you’re thinking of your next role in HR, visit Personnel Today Jobs.