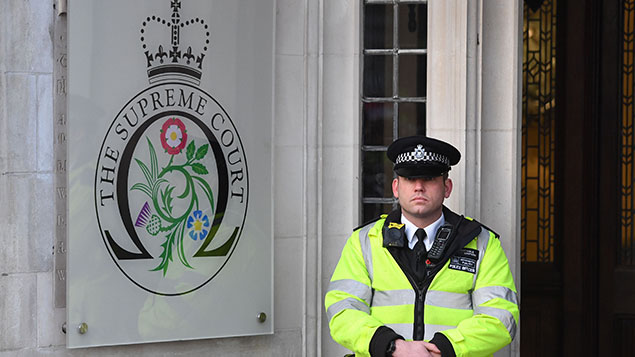 The Supreme Court has rejected a government appeal against a human rights ruling won by a group of people who claimed their minor past convictions held them back in life.

The UK’s highest court ruled that having to disclose youth reprimands to an employer was incompatible with human rights legislation – so a child issued with a youth caution, for example, should not have to disclose this when applying for a job.

Supreme Court justices found that a revised criminal records disclosure scheme was “disproportionate” in two respects, and the government will now have to consider reforming employers’ and candidates’ legal obligations when disclosing past criminal convictions during the hiring process.

The decision upholds a 2017 ruling by the Court of Appeal, and rules that the disclosure of youth reprimands on DBS forms is “directly inconsistent” with their intended purpose as a diversion from the criminal justice system.

One claimant’s case was brought by the children’s charity Just for Kids Law, on behalf of a young person who challenged the policy of disclosing records of reprimands he received when he was 13 years old. He had been reprimanded for sexually assaulting two younger boys, which records show were carried out as “dares” and experimentation and the individual has not offended since. He has since been unable to apply for any job with an enhanced criminal records check.

While certain offences clearly should be disclosed to employers, it is plain common sense that a fair system should not unnecessarily blight the lives of people who are trying to get on in life by disclosing old, minor and irrelevant information which holds them back and stops them from reaching their potential” – Christopher Stacey, Unlock

Under current law, these reprimands would appear on standard and enhanced DBS checks until he is 100 years old. His legal team argued that this policy fails to treat children differently to adults and contravenes Article 8 of the European Convention of Human Rights, which affords the “right to a private and family life”.

Another claimant, a woman referred to in court as P, was charged with shoplifting a 99p book in 1999 while suffering from a then undiagnosed mental illness. P now wants to work as a teaching assistant, but with each application she is required to disclose her historic convictions, and by association also her mental health issues.

Enver Solomon, chief executive of Just for Kids Law, said of the judgment: “Our client should never have been given a criminal record that stays with him for life. This judgment makes clear that the disclosure of reprimands and cautions, the legal equivalent of a slap on the wrist, is disproportionate and damaging to the future rehabilitation of children, preventing them from moving on from their past.”

In October 2017, a parliamentary inquiry found that disclosure mechanisms for juvenile offences could fall short of the UK’s obligations on the UN Convention on the Rights of the Child.

Christopher Stacey, co-director of Unlock, which campaigns for fair treatment of those with criminal convictions, said of today’s judgment:

“We are pleased the court has ruled that two aspects of the criminal records disclosure scheme are disproportionate and in breach of Article 8 of the European Convention on Human Rights; in particular, the blanket rules which require the automatic disclosure of all convictions where a person has more than one conviction, and the requirement that some childhood cautions be disclosed indefinitely.

“This is an important ruling which stands to affect many thousands of people with old and minor criminal records who have been unnecessarily anchored to their past.”

This judgment makes clear that the disclosure of reprimands and cautions, the legal equivalent of a slap on the wrist, is disproportionate and damaging to the future rehabilitation of children” – Enver Solomon

He urged the government to take “prompt and considered action on the filtering system” and to carry out a fundamental review of the criminal records disclosure regime.

He wants ministers to consider removing the multiple convictions rule (which requires candidates to disclose all convictions if there is more than one on record), to reduce the list of offences that are not eligible to be filtered in job applications, and creating a distinct system for disclosing criminal records acquired in childhood, as well as a “more nuanced approach to those acquired in early adulthood”.

He added: “While certain offences clearly should be disclosed to employers, it is plain common sense that a fair system should not unnecessarily blight the lives of people who are trying to get on in life by disclosing old, minor and irrelevant information which holds them back and stops them from reaching their potential.

“A fair, proportionate and flexible filtering system should be developed which protects the public without unduly harming the ability of people to move forward positively with their lives.”

A government spokesperson said: “We have noted the Supreme Court judgment and will consider the ruling carefully before responding.”

Adele Downey, chief executive of the Disclosure and Barring Service, said: “In light of today’s judgement by the Supreme Court we will be working closely with the Home Office and Ministry of Justice and will agree with them the steps necessary to ensure we adhere to the findings of the judgement.”