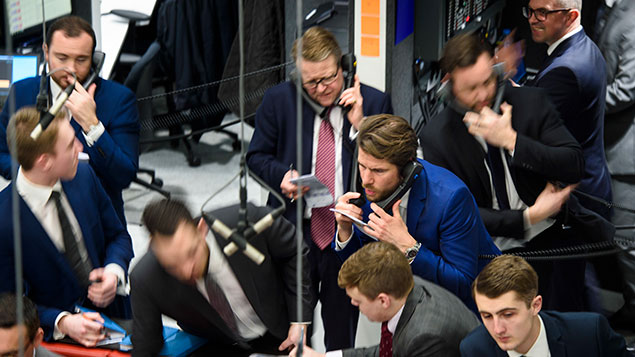 Traders in the 'ring' of the London Metals Exchange.
Photo: PA Images

The London Metal Exchange (LME) has banned dealers on its trading floor from working under the influence of alcohol.

It is thought the move to zero tolerance on the trading floor is a response to the increasingly high volume of deals being placed and is not the result of any particular incident. The policy will not be enforced with the use of breathalysers.

Alcohol and drugs at work

Liquid lunches: how employer should tackle them

Podcast: substance misuse in the workplace

Member firms of the Exchange’s trading floor – a circular arena (called the “ring”) with red sofas from which brokers help set global prices for metals – were told about the LME’s decision last night, according to Bloomberg.

A spokesperson for the Exchange said: “The LME has broad powers under its rulebook to ensure fit and proper behaviour on the ring and ring dealing, and members have policies and procedures in place regarding the behaviour of their staff while conducting business on the ring. The LME appreciates the high standards upheld by its members, and has formalised the general position that ring-based personnel should not consume any alcohol prior to conducting business.”

About 120 ring traders will be affected by the ban. Another 250 employees at the Exchange who don’t work on the trading floor will not be subject to the ban.

Unconnected with the alcohol ban, in April the LME published a code of conduct directed at all staff aimed at preventing “threatening, humiliating or disruptive” behaviour.

Last year, according to the Financial Times, the LME was criticised after Gerald Group, a metals trader, hosted an event at the Playboy Club. The code of conduct states that LME-branded functions should not be booked at venues that could make some market participants feel uncomfortable.

The Exchange still has an “open-outcry” mode of ring-trading, in which closing prices for metals such as zinc, steel, tin and nickel are set in two daily periods ended with the ring of a bell, accompanied by much shouting and gesticulating.

It is the last exchange in Europe where open-outcry trading takes place. Other kinds of trades are conducted electronically. Nine companies have exclusive rights to trade in the ring.

Chief executive Matthew Chamberlain, said of the code of conduct: “The LME has long-held values of integrity, diversity, excellence, collaboration and engagement. The publication of our Code of Conduct formalises and extends our principles to all our stakeholders participating at LME and LME-affiliated events. By setting out our values and expected conduct, we are taking a positive step in the changing behaviour of the wider industry.”

Last month former banker Gay Huey Evans was appointed the first female chair of the board of the LME and will take up her role in December, replacing Sir Brian Bender.

The LME is the latest City institution to modernise its rules and instil a more ethically based workplace culture, following Lloyd’s of London which has seen its reputation damaged by a number of sexual harassment claims. Lloyd’s banned drinking in work hours in 2017.