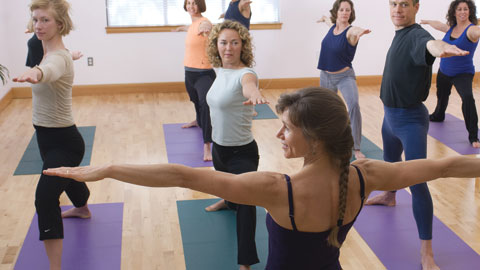 A workplace yoga intervention can reduce perceived levels of stress at work and improve back pain and psychological wellbeing, according to a study of UK local government workers. People in the intervention group received one 50-minute yoga session a week for eight weeks and a 20-minute DVD for home practice. At the end of the programme, the intervention group reported significantly lower stress scores and substantially higher scores for feeling self-assured, attentive and serene compared with the control group.

The Partnership for European Research in Occupational Safety and Health (PEROSH), a group of European research institutes, has published a set of seven priority topics for research in occupational health and safety for the next decade. The main challenges for OH in the run-up to 2020, as the group sees them, are: promoting sustainable employability to prolong working life; preventing disability and reintegrating people into work; psychosocial wellbeing; the multifactorial causes of work-related musculoskeletal disorders; new technologies; the occupational risks related to engineered nanomaterials; and promoting a safety culture to prevent occupational accidents.

PEROSH (2012). “Sustainable workplaces of the future”.

Repeated exposure at work to multiple organic solvents such as ethanol and acetone is associated with shorter menstrual cycles in premenopausal women, according to a study of 288 women in a liquid crystal display plant in Taiwan. The prevalence of short menstrual cycles was higher in panel and module workers, where concentrations of volatile organic compounds were highest, than in those working in other areas of the plant such as offices and fabrication areas.

The number of hospital admissions for stress rose by 7% in the 12 months to May 2012, from 5,960 to 6,370, according to new data from the Health and Social Care Information Centre. Admission rates for stress were highest among working-age people, and highest in the North-West of England and lowest in the South-West. Men accounted for slightly more admissions for stress than women and admissions overall rose with age until 50, at which point they started to decline steadily. Tim Straughan, chief executive of the information centre, said: “It might be assumed that stress and anxiety are conditions that result in a journey to a GP consulting room rather than a hospital ward. However, our figures suggest thousands of cases a year arise where patients suffering from stress or anxiety become hospitalised in England.”

Forty per cent of English local authorities responsible for cooling towers have not carried out any proactive legionella risk inspections within the past five years, according to research by Environmental Health News. A survey of environmental health officers in councils using a freedom of information request found that many blame the cut in inspections on changes to a risk-based rating system in 2010. Local authorities are responsible for a quarter of notifiable legionella devices in England, including cooling towers and evaporative condensers, with the Health and Safety Executive responsible for monitoring the rest. Mark Hoban, employment minister at the Department for Work and Pensions, said that the new risk-based approach focuses on installations likely to have the highest risk of harbouring legionella.

Workplace stress is associated with a decrease in physical activity, according to a Finnish study of public-sector workers. Almost one-fifth (19%) of participants who were sufficiently physically active at the beginning of the study in 2000 had become insufficiently active by the follow-up point four years later. Employees with a repeated exposure to little or no control over their jobs and low rewards were more likely to be inactive at follow-up than those with no reports of such stressors.

Asking prospective professional drivers about their sleep habits and complaints and combining this with demographic data predicts most of the clinically significant sleep-disordered breathing in this population, according to research involving 301 applicants for a professional driver’s licence. Applicants completed self-administered questionnaires and sleep was recorded for one night. Moderate or severe sleep-disordered breathing was prevalent in at least 25% of applicants, and significant predictors of the condition included body mass index, age, smoking, prevalence of snoring in fathers, afternoon nap-taking and falling asleep while travelling as a passenger.

Factory worker Paul Eames has been awarded compensation after developing work-related dermatitis during his employment as an operative for a building products company. When he first developed signs of the condition, Mr Eames was moved off the job, but was put back in an area where he was exposed to resin several years later. His arm swelled as a result and he developed blisters and welts on both hands and arms, and on his face and eyes. At this point, his employer removed him from working with resins but he continued to work in the department where the material was used. Eventually, he was placed in a role where he was not exposed to the damaging resin. Mr Eames’ solicitor argued that he should never have been re-exposed to the harmful resin once it became clear that he suffered from dermatitis.