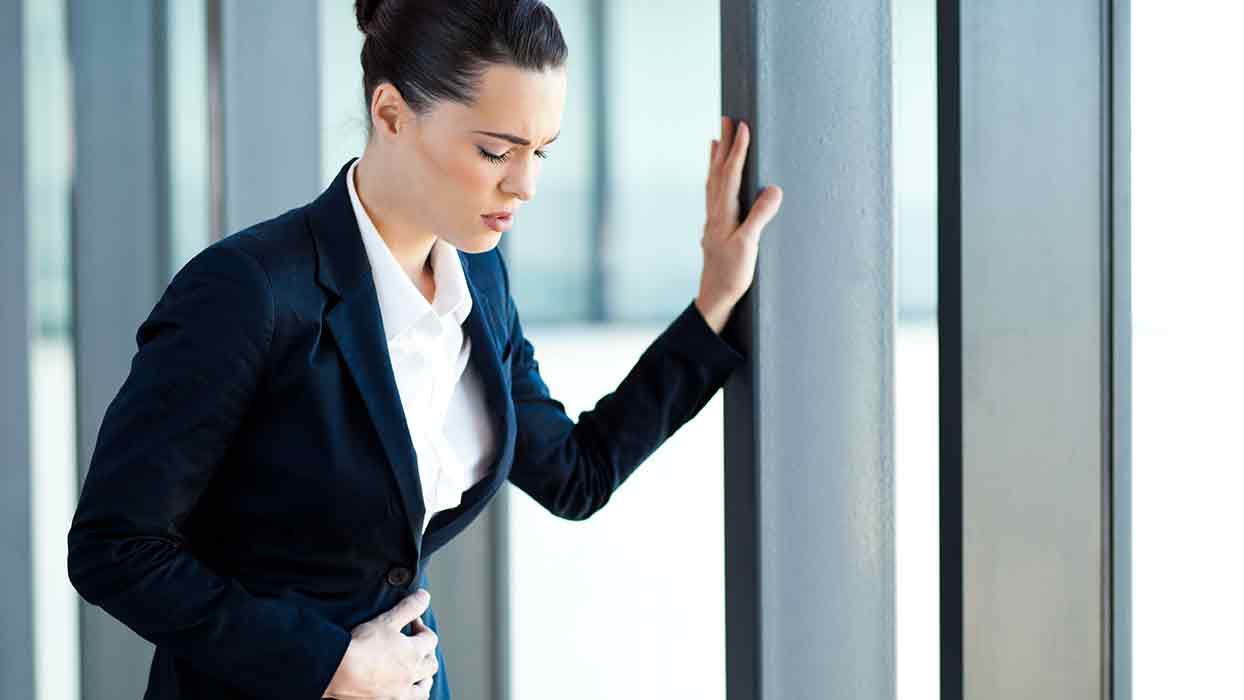 David Murana explains what the role of occupational health (OH) is in identifying menstrual disorders and referring employees for treatment.

Menstrual disorders can significantly impact on work attendance and performance (Palmer Brown and Hobson, 2013) and primary dysmenorrhoea has long been cited as one of the single most common reasons for periodic or short-term sickness absence among young women (Sundell, Milsom and Andersch, 1990).

Primary dysmenorrhoea is defined as “painful menstrual cramps without any evident pathology to account for them” (Dawood, 2006). Pain is usually in the lower central aspect of the abdomen (suprapubic region), but has the potential to radiate to the lower back or lower legs (Nasir and Bope, 2004). The pain has been associated with high levels of prostaglandins and leukotrienes in the menstrual fluid, which then causes abnormal uterine contractions (McEvoy, Chang and Coupey, 2004).

Onset of primary dysmenorrhea occurs during or not long after menarche, or first menstrual cycle (Dawood, 2006). The symptoms diminish with increasing age, and the highest is among the 20-24 age group, with a progressive decrease thereafter (Dawood, 1995). Pain is experienced by those affected for two to three days during ovulatory cycles (Dawood, 1981), and is most intense during the first 24-26 hours, when prostaglandin levels are high within menstrual fluid (Dawood, 2006). Sickness absence is likely to occur at this point when the pain is acute. Primary dysmenorrhea may be accompanied by non-gynaecological symptoms such as nausea, bloating, vomiting, migraine and emotional symptoms (Clinical Knowledge Summaries (CKS), 2009).

Differences between primary and secondary dysmenorrhoea

Secondary dysmenorrhoea is the occurrence of painful menstruation with evidence of pelvic pathology such as fibroids, endometriosis, pelvic inflammatory disease and adenomyosis (Proctor and Farquhar, 2006). In this case, pain may persist after menstruation has ended or be present throughout the period. Gynaecological symptoms may appear (dyspareunia, vaginal discharge, intermenstrual bleeding, menorrhagia, postcoital bleeding) and also non-gynaecological symptoms (rectal pain and bleeding) (CKS, 2009). In addition, menstrual pain starts in women in their 20s or 30s, after previous relatively painless cycles (Smith, 1993).

Some would argue that primary dysmenorrhea is entirely a primary care problem which should be managed by GPs. Proctor and Farquhar (2006) report that, despite the prevalence and impact that dysmenorrhea has on both wellbeing and quality of life, few women seek medical treatment. For those who do seek treatment or advice in primary care, up to 50% of patients do not follow the advice given to them (Tate, 2009).

Severe forms of primary dysmenorrhea can result in limitation of activities and work absenteeism (Dawood, 2006), thus also making it an OH problem. This presents the opportunity for employees to get advice from OH, if referred. Return-to-work interviews carried out by employers following short-term sickness absence, can, on occasion, identify issues that would trigger employee referral to OH by the employer (Preece and Royles, 2013). Furthermore, one of the crucial roles of practitioners in the management of sickness absence is to ascertain whether or not an employee does have any underlying medical issues and then ensure that appropriate treatment or advice is given to them (Preece and Royles, 2013). As an employee might also be facing disciplinary action regarding work attendance, advice given is likely to be well received by the employee.

OH practitioners should refer employees to their GPs for overall management. Employees should be made aware that they may require examination and/or further investigations, which are best arranged in primary care.

It should be first explained to the employee that the nature of the problem invites intrusive questions. The history-taking should entail the impact of the problem on day-to-day activities, questions about the onset of the problem, all the symptoms that would help distinguish between primary and secondary dysmenorrhea, and social history.

Over-the-counter and prescription medications that are currently available and quite effective in managing primary dysmenorrhea are underused, and information
regarding the condition is inadequately
disseminated to targeted young populations (Dawood, 2006). The first line of treatment, if not contraindicated, is a non-steroidal anti-inflammatory (NSAID). A Cochrane review concluded that NSAIDs are effective in the treatment of dysmenorrhoea (Majoribanks et al, 2010), however it did not provide any evidence as to which NSAID is the safest and most effective. Ibuprofen could, however, be advised as it “has fewer side effects than other non-selective NSAIDs” (British National Formulary, 2014) and is less expensive.

Paracetamol in addition to ibuprofen could be advised, if the effect of ibuprofen on its own is not sufficient. No evidence was found regarding the combined use of paracetamol and NSAID in the treatment of primary dysmenorrhea, this is based on recommendations from CKS (2009).

Where NSAIDs are ineffective, patients should be advised to use the second line of treatment, which is the oral contraceptive pill (OCP), normally prescribed by GPs. Although a Cochrane review showed limited evidence of pain reduction in women with dysmenorrhoea, studies (Wong et al, 2009; Chan, Dawood and Fuchs,1981) concluded that the use of OCPs in dysmenorrhoea reduces menstrual fluid and prostaglandin levels significantly, and provides pain relief.

Psychological symptoms have been associated with dysmenorrhoea (Latthe et al, 2006). If necessary, following history taking, the OH practitioner could initiate psychological input via an employee’s GP, or to services that accept referrals directly from OH. No evidence was found in this context, however Proctor et al (2007) concluded from five random control trials (RCTs) in a Cochrane review that limited evidence indicated that behavioural interventions may be effective for dysmenorrhoea.

Some argue that a decrease in dysmenorrhea happens with physical exercises (Choi and Salmon, 1995; Golomb and Warren, 1998). A Cochrane review by Brown and Brown (2010) reported a trial of limited quality, which suggested that exercise may lead to some symptom reduction during menstruation. Such advice could be given, but with caution, given the limitation.

Burnett et al (2005) suggested that smoking makes primary dysmenorrhea worse, but no evidence was found on the Cochrane database regarding this link. However, given the overall poor health outcomes associated with smoking, this could be an opportunity to direct smokers to cessation services.

It has been proposed that transcutaneous electrical nerve stimulation (TENS) relieves menstrual pain. Proctor et al (2002), in a Cochrane review, identified seven RCTs with the objective of determining the effectiveness of high- and low-frequency TENS versus placebo, no treatment or medical treatment for primary dysmenorrhoea. Overall, the review concluded that high-frequency TENS was more effective for pain relief than placebo, but there was insufficient evidence to assess the effect of low-frequency TENS. Advice could be given on the use of high-frequency TENS, which is available without prescription.

Proctor and Murphy (2001) carried out a review regarding the safety and efficacy of herbal and dietary supplement when compared with each other, placebos, no treatment or other conventional treatments such as NSAIDS. The review that looked at magnesium, vitamin B6, vitamin B1, omega-3 fatty acids and Japanese herbal combination showed some evidence that vitamin B1 and magnesium does help to reduce pain in dysmenorrhoea but concluded that more research is needed. The use of some herbal and dietary supplements may appeal to some individuals, therefore this information could serve as advice for some employees.

Primary dysmenorrhea affects significant numbers of young women and can lead to repeated short-term sickness absence. Not everyone affected seeks or gets treatment and advice, and all of the foregoing advice combined could lead to referral to OH in some circumstances. OH practitioners are in an ideal position to provide guidance on effective pain management strategies, that have been discussed above. It is, however, imperative that employees who are seen in OH in this regard are referred back to their GP for overall management.

Chan WY, Dawood MY and Fuchs F (1981). Prostaglandins in primary dysmenorrhea. Comparison of prophylactic and non-prophylactic treatment with ibuprofen and use of oral contraceptives. American Journal of Medicine [e- journal]; 70(3), pp.535-541. Abstract only.

Nasir L and Bope ET (2004). “Management of pelvic pain from dysmenorrhea or endometriosis”. Journal of the American Board of Family Practice; 17, pp.43-47.

David Murana is an assistant at the Faculty of Infectious and Tropical Diseases, London School of Hygiene and Tropical Medicine.
View all posts by David Murana →
Previous Article
Next Article