Employers want more clarity on when and how their employees should return to work after Prime Minister Boris Johnson’s address to the nation yesterday.

Johnson used a televised address to unveil a “conditional plan” to ease coronavirus lockdown measures in the UK. He said that those who could not work from home, in industries such as construction and manufacturing, should be “actively encouraged to go to work” in England.

Ten issues for HR to consider when lockdown ends

The government’s previous message of “stay home” changed to “stay alert” as he introduced a five-step Covid Alert System that would denote the points at which lockdown could be eased.

Devolved governments in Wales, Scotland and Northern Ireland have continued to communicate the “stay home” message, however.

The PM said: “We now need to stress that anyone who can’t work from home, for instance those in construction or manufacturing, should be actively encouraged to go to work.

“And we want it to be safe for you to get to work. So you should avoid public transport if at all possible – because we must and will maintain social distancing, and capacity will therefore be limited. So work from home if you can, but you should go to work if you can’t work from home.”

Johnson added that the government would publish new guidance in the coming days for employers to ensure that workplaces are safe in terms of social distancing and physical protection. It has since been confirmed that the advice applies from Wednesday this week, 13 May.

Business groups have argued that, without these detailed plans, they will struggle to make decisions on bringing workers back.

Adam Marshall, director of the British Chambers of Commerce (BCC), said: “Businesses will need to see detailed plans for the phased easing of restrictions, coordinated with all nations across the UK and supported by clear guidance.

“It is imperative that companies have detailed advice on what will need to change in the workplace, including clarity on the use of personal protective equipment (PPE).”

Carolyn Fairbairn, director general of the CBI, said the “message of continued vigilance is right” but agreed that further details were essential.

“This announcement marks the start of a long process. While stopping work was necessarily fast and immediate, restarting will be slower and more complex. It must go hand in hand with plans for schools, transport, testing and access to PPE. Firms will want to see a roadmap, with dates they can plan for.”

Jonathan Geldart, director general of the Institute of Directors, added: “As people with ultimate legal responsibility, directors need to have confidence that it’s safe, and that if they act responsibly they won’t be at undue risk. Businesses should consult with their people to put in place robust policies, which in many cases might not be an overnight process.” 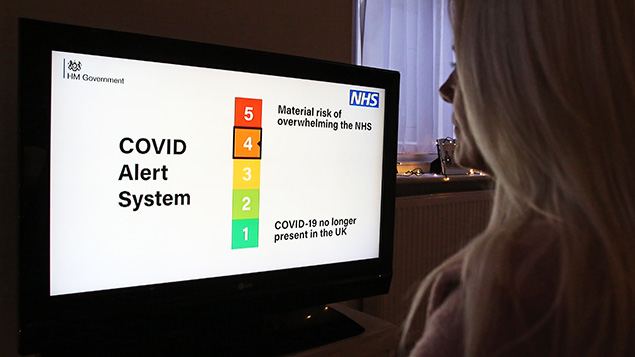 Johnson said the government would continue to monitor the ‘R’ rate – the reproduction rate of the disease – and would only continue to ease lockdown measures if this continued to fall. The five stages of the alert system range from most critical at Level 5 to Level 1 where the disease is no longer present.

He said: “Over the period of the lockdown we have been in Level Four, and it is thanks to your sacrifice we are now in a position to begin to move in steps to Level Three.”

School pupils in reception, year 1 and year 2 will return to school on 1 June “at the earliest”, and some hospitality businesses may be able to open from July, he added.

Unions were swift to express their concern over workers’ safety. Len McCluskey, general secretary of Unite, said the advice would leave workers “cramming onto public transport, putting at risk their lives and those of others”.

“This has not been thought through and the failure to do so places working people in danger,” he said. “Similarly, issuing safety guidance to employers instead of definite, mandatory instructions is not acceptable.

“This runs a huge risk that some employers will follow the advice while others do not, and we urgently need to hear more from government about how it will install the inspection and enforcement systems necessary to support safe working.”

TUC general secretary Frances O’Grady said that telling people they could go back to work with 12 hours’ notice was a “recipe for chaos”.

“The government still hasn’t published guidance on how workers will be kept safe,” she said.

“Unions want to support a safe return to work so we can start rebuilding Britain. Government must provide clear direction to workers and business by introducing tough new rules on workplace safety.”

“The Prime Minister appears to be effectively telling millions of people to go back to work without a clear plan for safety or clear guidance as to how to get there without using public transport,” he said.

“What the country wanted tonight was clarity and consensus, but we haven’t got either of those.”

Rustom Tata, partner at law firm DMH Stallard, said the lack of clarity on the advice could cause issues if staff are cautious about turning up to work.

He said: “Many workers, presumably on furlough if they haven’t been able to work for the last couple of months, will still be concerned about the health risks of attending at work without there being very clear provisions in terms of what protective measures are being taken in the workplace.

“For others, the journey to and from work will present a logistical challenge. And that’s before the health risks of travelling on public transport.

Tata believes in this case a dismissal would “almost certainly” be unfair.

“In fact, employees who raise concerns about their safety in the workplace, may be able successfully to claim unfair dismissal with increased compensation and without needing any minimum period of service.

“What the country wanted tonight was clarity and consensus, but we haven’t got either of those” – Keir Starmer, Labour party leader

“Clearly, the PM is attempting to ‘move the needle’ but until the position on public transport and school reopening are clearer and deliverable, little is likely to change for the overwhelming majority of workers.”

Ranjit Dhindsa, head of employment at Fieldfisher, advised employers to continue to use the government’s furlough scheme – which remains open until the end of June – and use the time to ready their workplaces so employees can safely return.

She said: “On the one hand, Boris has given many businesses in the UK a green light to get things started again, but on the other hand there are ‘conditions’ regarding workplace safety.

“Failure to adhere to these conditions could open up many businesses to claims from employees over the safety of their workplace.

“The government has extended the furlough scheme till the end of June, so businesses should use the time to plan workplace logistics, consult their employees about the changes and their obligations, have them agree and then start a process of inviting them back into the workplace.”

Apprenticeships are the solution to your recruitment problems