By Grant Ciccone on 26 Aug 2015 in Coronavirus, Wellbeing and health promotion, Occupational Health 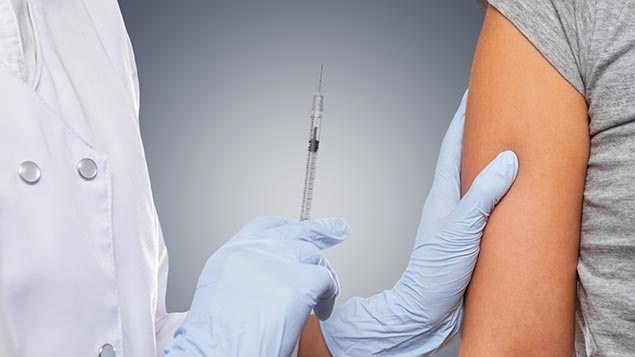 Seasonal influenza vaccinations are important for healthcare workers in both the northern and southern hemispheres. Occupational health adviser Grant Ciccone explains why.

Hospital staff, laboratory workers, students in healthcare disciplines and other healthcare workers (HCWs), such as therapists and cleaners, are all at risk of exposure to infectious diseases (Haagsma, 2012). This is because of their contact with patients or material from patients with infections that may not yet be diagnosed. It is therefore important for HCWs to maintain immunity against diseases that can be prevented by vaccination.

Many people consider influenza to be a mild disease, from which one can easily recover. However, those with underlying conditions (for example, diabetes, heart disease, kidney failure, lung disease, neuromuscular or blood disorders, as well as those with low immunity) are at a greater risk of developing complications such as pneumonia and heart failure (Rothberg et al, 2008; Rothberg and Haessler, 2010).

Those with an influenza infection may be asymptomatic or may not seek medical attention until after the first few days of acute illness. They may therefore unknowingly pass the infection to others either while in the community or nosocomially (while in hospital). There are many reports in international literature of influenza transmission and outbreaks in hospitals and nursing homes, and therefore HCWs may acquire influenza from patients or their coworkers (Kuster, 2011).

Vaccination is effective in building immunity and protecting against the influenza virus. It also reduces the risk of transmission to patients, colleagues and family members. There are well-documented benefits of influenza vaccination on patient outcomes, HCW absenteeism and reducing influenza among staff. Vaccinating HCWs and those who are vulnerable also helps in differential diagnosis and reducing “background noise” when there are threats of an epidemic from Middle East respiratory syndrome coronavirus or avian flu (Kucharski, 2014).

Why do we need to have a vaccination every year?

Influenza viruses change from year to year. The immunity that has been built up from one strain of the virus does not always provide adequate protection when a new strain is circulating. A vaccine that has been made up against flu viruses circulating last year may not protect against the newer viruses in the current year (Flannery et al, 2015). This is why the influenza vaccine is updated to include current viruses each year.

Another reason to get the flu vaccine every year is that a person’s immunity will decline over time and may be too low to provide adequate protection after 12 months.

What is the difference between northern and southern strains?

In tropical countries such as Singapore, Malaysia, the Philippines and Indonesia, influenza cases often peak during the months of April to July and November to January, (roughly similar to the months when peaks in flu activity are observed in the northern and southern hemispheres) (Moura, 2010).

The strains of the virus to be included in the vaccine each year are recommended by the World Health Organisation and the individual sovereign state’s Ministry of Health (Jefferson et al, 2010).

Are there people who should not receive the vaccine?

Almost everyone over the age of six months (including those who are pregnant) can have the vaccine, as well as those with chronic health conditions (Glezen, 2008). However, those who have had a severe allergic reaction after being vaccinated with the influenza vaccine or anyone with an allergy to high-protein foods (such as eggs or chicken) or to one of the components in the vaccine (gentamycin, neomycin or formaldehyde) should not receive it.

What are the side effects of seasonal influenza vaccination?

The most commonly reported side effects of the flu vaccine have been redness or slight swelling at the site of the injection. Some people may also experience headache, fever, rashes and nausea. This generally occurs a day or two after vaccination. The side effects are usually temporary.

Guillain-Barré syndrome, a rare neurological disorder, was previously thought to be associated with the flu vaccine but current evidence suggests otherwise (Vellozzi, 2014).