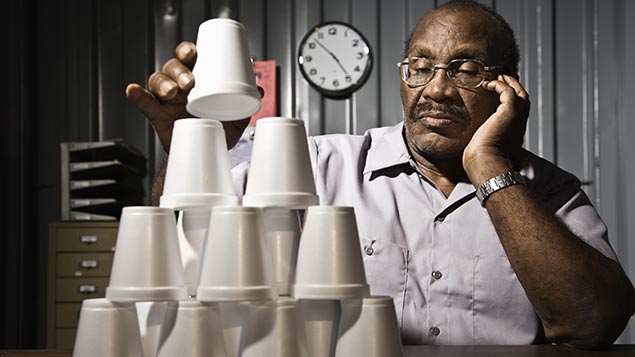 With an ageing demographic, there is an increasing risk of mild cognitive impairment in the working population. Dr Jenny Barnett of Cambridge Cognition looks at what this means for employers and occupational health.

Mild cognitive impairment (MCI) describes a set of symptoms, rather than a specific medical condition or disease. MCI symptoms usually include subtle problems with one or more of the following:

These symptoms must be a noticeable change from previous levels of functioning, and will often be recognised by the individual affected and those who know them. Problems are usually not severe enough to interfere with routine daily life, but at work they can pose a risk to performance, judgment and decision-making.

While increasing age brings a higher liklihood of MCI, there are many other factors that may result in an individual developing cognitive problems, including:

In older adults, MCI can often be a sign of an incipient neurodegenerative disorder such as Alzheimer’s disease. Around 70% of people with MCI also develop dementia (Budson and Solomon, 2011). However, not everyone with MCI will deteriorate; some remain stable over time, and a few improve and no longer have any problems. These different outcomes reflect the range of different causes.

Prevalence and incidence estimates for MCIs vary widely, despite an extensive body of research (Ward et al, 2012). Part of the reason for this is because studies have used different definitions of MCI and looked for it in different ways – MCI is rarely tested for and this poses a significant challenge to understanding its full extent.

Among older workers, there are likely to be large numbers of people who are worried about memory and other cognitive problems, and some who have measurable issues but have built up coping strategies to deal with them. As such, it is reasonable to assume that the prevalence is much higher than is currently detected.

This assumption is supported by population-wide increases in known risk factors for MCI and Alzheimer’s disease among older workers, including diabetes, hypertension, high cholesterol and physical inactivity.

Impact of an MCI

Having an MCI can affect a person’s mood, social interactions, self-confidence and ability to organise, plan and make decisions. Put this into a work context and there are many detrimental scenarios that could play out if the condition were to go undiagnosed.

As well as impacting on their own life, employees with undetected MCI can represent a number of potential risks to their employer; from those who might need to drive a train, to those who make decisions in the boardroom, and all aspects of health and performance in between.

There are currently 7.7 million employees over the age of 50 in the UK, according to the Department for Work and Pensions. With the abolition of the default retirement age, this number is increasing every year. By 2020, people older than 50 will represent 48% of the adult population, and 32% of the working-age population, according to the Office for National Statistics.

This ageing demographic, along with the behavioural and lifestyle factors that are thought to be the major drivers of many MCIs, gives great cause for concern; up until now, employers have not really got to grips with the practical implications.

Undetected MCI could be one reason for a drop in performance and a rise in unexplained sickness absence and healthcare-related costs. The Centre of Economics and Business estimates that the early retirement of those whose MCI converts to dementia while still working costs English businesses £627 million a year.

Age and genetic make-up are major risk factors that cannot be modified. However, there is a growing body of research offering evidence that interventions that improve physical health can have as great an impact on cognitive health. In general, what is good for the heart is also good for the brain, including:

Keeping mentally and socially stimulated is also thought to have a positive influence on older workers.

There are significant and life-changing benefits to the individual and their employer from identifying and diagnosing an MCI as soon as possible, whether it is due to a reversible condition or not.

For both parties, it means that they know what they are dealing with and can make appropriate plans. It reduces risk to the business and ensures the personal safety of the individual. It also lessens any uncertainty and distress.

Early identification also improves the effectiveness of treatments. While there is no cure for Alzheimer’s or other forms of dementia, available treatments are thought to be most effective in the early stages of the disease.

Cambridge Cognition’s principal cognitive assessment for MCI, Cantab Mobile, is based on technology that has been used in scientific research for more than 25 years. Invented at the University of Cambridge, the Paired Associates Learning (PAL) test was developed as a way of assessing episodic memory without language barriers. PAL has been used worldwide in universities and clinics, and by scientists developing new medicines for Alzheimer’s and other diseases. Research using the PAL test has led to 175 publications in peer-reviewed scientific and medical journals.

Problems with episodic memory can be the first warning signs of Alzheimer’s disease and, among patients with MCI, tests of episodic memory are the best predictors of subsequent conversion to Alzheimer’s. However, for years testing has relied on measures that are not sensitive enough to detect the early warning signs. By testing non-verbal episodic memory, Cantab Mobile gives a sensitive and specific result at a very early stage, which is vital for choosing the appropriate actions and treatment in order to maintain quality of life.

The PAL test depends on the integrity
of the hippocampal formation and related
structures, which are the areas first affected
by Alzheimer’s disease. Neuro-imaging
studies of healthy older adults completing
the PAL test have shown that bilateral
hippocampal activation increases as the
difficulty of the test – the number of patterns
that the patient must remember – goes
up (de Rover et al, 2011).

In Cantab Mobile, an individual’s score is
automatically adjusted to take into account
the effects of age, education and gender on
memory. Women make slightly fewer errors
on the PAL test than men, and people who
have spent longer in education tend to have
slightly better scores. These effects are
relatively small, compared with the effect of
ageing: episodic memory is a function that
develops in early childhood and remains
relatively stable through to around 40,
before worsening in later life.

The Alzheimer’s Society’s, “Dementia friendly guide for employers” contains a case study, which is a great illustration of what is at stake.

Hilary worked as head of business development and support at the UK Renal Registry for nearly 11 years following years of experience in senior management positions. She first noticed symptoms of cognitive impairment 15 years ago. Hilary did not visit the GP until seven years ago and only received a diagnosis of dementia in the last two years, after returning to the GP for a third time.

In the 15 years between noticing her symptoms and receiving a formal diagnosis, Hilary was not given the opportunity of having her cognitive health assessed properly. During this time, she made important life choices which would have been different had she known what she does now.

Her diagnosis has allowed her to make more appropriate decisions and she felt glad that she could explain to her employer why she was not functioning as well as she was before.

According to The Alzheimer’s Society, only 48% of people with dementia are diagnosed in the UK, with many people of working age having their symptoms put down to stress or depression.

The Alzheimer’s Society reports that 18% of people under the age of 65 continue to work after a diagnosis of dementia. Hilary, referred to earlier, is one of them.

There are no figures available for the number of people in work affected by an MCI or not diagnosed with an early stage of dementia. This is because employers are only just beginning to gain an understanding of the condition and how to identify it.

Occupational health professionals have a vital role to play in developing this understanding and in what can be done to improve outcomes. They need to consider MCI in a number of referral scenarios that could involve the following:

In Hilary’s case, her MCI symptoms were put down to stress or depression and, as a result, she and her employer lost a lot of time before knowing the real nature of her condition and were able to take the appropriate action. If the right cognitive assessment had been offered from the start, then as well as gaining precious time, there would have been cost savings by eliminating unnecessary diagnostics.

If an employee’s MCI progresses to dementia, then their symptoms can increasingly affect their ability to work. The number of these types of referral is only going to increase with time and those involved in OH need to be prepared for how best to manage them.

As the understanding of the benefits of early identification of MCI in an ageing workforce grows, it is highly likely that a wide range of health assessments, including some statutory medicals, will need to be reviewed for cognitive components.

Outcomes of an MCI

The outcomes of MCI in part depend on how early the problem is identified. It is clear that many people in the past have been misdiagnosed or gone undiagnosed.

If an assessment indicates that there is the possibility of a clinically relevant memory problem, then primary care providers should investigate possible reversible causes such as the side-effects of medication. National Institute for Health and Care Excellence guidelines also recommend routine haematology and biochemistry screens and tests for thyroid function, vitamin B12 and folate levels.

If the cause remains unknown, the individual should be referred to a memory clinic or neurologist for any necessary further investigations.

Through the work of organisations such as The Alzheimer’s Society and with wide media coverage, more and more stakeholders are building up a better understanding of Alzheimer’s disease and other forms of dementia. Despite this increasing awareness of dementia, however, greater attention needs to be paid to MCIs.

For most people, this stage will precede the more serious decline of dementia. It can be a life-changing condition but, if identified early enough, gives those affected the opportunity to prolong their working life and plan for the rest of their future.