By Sarah Silcox on 3 Aug 2016 in Research, Occupational Health 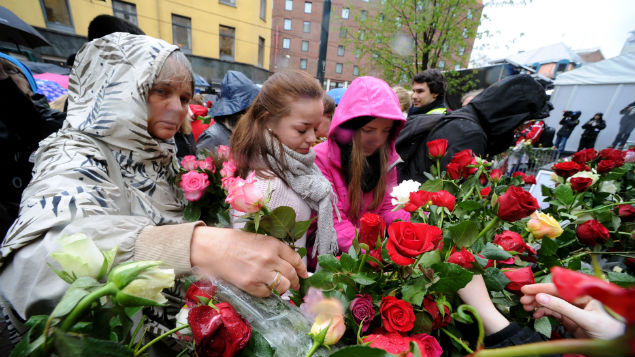 People leaving flowers outside the courthouse during the trial of Anders Behring Breivik, responsible for a terrorist attack on a Norwegian summer camp in 2011. Allover Norway/REX/Shutterstock

This month’s round-up of occupational health research includes studies on the impact of resilience building and post-traumatic stress of workers responding to emergencies.

Resilience-building programmes have only a “modest” effect in the workplace, and this effectiveness diminishes over time, according to a meta-analysis of 37 research studies. The impact of resilience programmes is weaker than that associated with secondary prevention tools, but similar to those shown for other primary interventions, the analysis suggests. Resilience programmes using a one-to-one approach, such as coaching, were most effective, followed by classroom-based sessions. Interventions based on a “train-the-trainer” approach, and web-based programmes, were least effective.

Professional rescue workers appear better equipped psychologically to deal with potential post-traumatic stress reactions following a terror attack than volunteers. This is according to a study of Norwegian rescue workers in the aftermath of two terrorist incidents in 2011.

Among professional rescue workers, the prevalence of sub-threshold post-traumatic stress disorder (PTSD) 10 months after the attacks was 2%, compared with 24% among volunteers. Other factors associated with a higher risk of PTSD included being a woman, witnessing injured and dead people, and possessing a lower degree of training.

A second study explores whether or not the degree of PTSD experienced by rescue workers is influenced by the nature of workplace support available to staff and volunteers. The Canadian case study finds that organisational support influences the life course of an individual’s traumatisation to a lesser or greater degree, depending on a range of factors, including organisational culture, the emphasis placed on overall employee wellbeing, and the quality and quantity of practices covering employee health.

In practice: the authors of the second study suggest improving organisational support for emergency responders by providing additional post-event information to permit “emotional closure”, empowering line managers to provide timely and appropriate treatment options, and developing an organisational culture that recognises the importance of employees’ psychological wellbeing to the operation of the organisation.

The DNA of night-shift workers may be damaged because the release of melatonin, an antioxidant, is suppressed. In this study, night-shift workers excreted less of a chemical marker for DNA repair during sleep, which the authors suggest may reflect a reduced functioning of individuals’ DNA repair machinery. The disruption of melatonin associated with shift working may be responsible for this effect, as melatonin is known to enhance repair of oxidative DNA damage. Poor-quality sleep, experienced by night-shift workers in particular, may similarly affect DNA repair.

Co- or multi-morbidity negatively affects an individual’s ability to function after returning to work from sick leave due to common mental health disorders, according to this study of 156 workers. A total of 44% of people in the sample had multi-morbidity (defined as two or more co-occurring chronic health conditions, including a common mental disorder). The study identifies four pathways of work functioning following rehabilitation – for example, 12% of the workers followed a path of increasing work functioning scores one year after a return to work, while between 23% and 41% followed the three other trajectories, each of which showed low functioning. Although co-morbidity did not predict which path the individual would follow, within the group with rising functioning, this effect was lower among those with high baseline multi-morbidity scores.

Working long hours over many years increases the risk of some specific chronic diseases, especially for women, according to this study, which used data from the “National longitudinal survey of youth 1979”. Looking at 32 years of job history, the authors show that working long hours over this period was significantly associated with higher risks of heart disease, non-skin cancer, arthritis and diabetes.

Almost half of a sample of teachers reported experiencing bullying at work, according to this study using data from the “5th European working conditions survey”. The study summarises an array of outcomes and proposes that workplace bullying may be reduced by limiting job demands and increasing resources.

Making favourable changes to lifestyle in middle age (50-60 years old) – for example, quitting smoking, increasing physical activity or reducing body mass index – may prevent early death, according to this Norwegian longitudinal study. It finds that at the baseline in 2001, each increment in lifestyle score (on a scale where 0 is poorest and is 4 best) is associated with a 21% lower all-cause mortality. A one-point increase in lifestyle score from 2001-04 was associated with a 38% reduction in all-cause mortality. The group reporting a change in score from 0-1 in 2001 to a score of 2-4 in 2004 had 4.8 fewer deaths per 1,000 person years compared with those people keeping an “unfavourable” lifestyle.