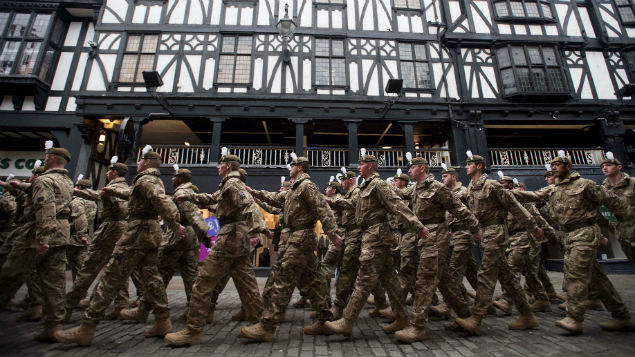 A training programme has been launched for managers dealing with former servicemen and women with PTSD. Piers Bishop explains the rationale behind the programme, and how management training can help all employees with the disorder.

Would you be able to recognise the symptoms if staff were suffering from post-traumatic stress disorder (PTSD), and be able to direct them to treatment? Most line managers and HR staff would answer “no”.

Too often the symptoms of PTSD are taken to be indicative merely of a “bad attitude” – such as absenteeism, mood swings, and the misuse of alcohol and drugs.

Failure to identify an employee with PTSD and help them to deal with it can lead to underperformance and the loss of potentially productive and high-performing people, in addition to the human cost, including the effect on colleagues.

The rate of occurrence of PTSD is estimated to be one in 25 among the general population. This may be similar to the ratio for former members of the armed forces – however, some estimates for veterans are as high as one in five for those who experienced combat in Afghanistan or Iraq. Also, the complexity of the disorder tends to be much greater for veterans.

PTSD Resolution was set up to provide free treatment for veterans to resolve the issues of military trauma. The charity provides a helpline for sufferers and access to local, accredited therapists, who number about 200 across the UK.

PTSD Resolution closely monitors the results of its programme, using a measurement scale approved by the National Institute for Health and Care Excellence (NICE). In almost eight out of 10 cases, the condition is resolved to the satisfaction of both the veteran and therapist.

Increasingly, the charity is working with HR teams and line mangers in organisations to help them understand and recognise the symptoms of trauma.

PTSD is a severe anxiety disorder that develops after exposure to an event, which results in psychological trauma. This may involve the threat of death or injury to the traumatised sufferer or to someone else, overwhelming the individual’s ability to cope. Symptoms of PTSD include experiencing the original trauma again through flashbacks or nightmares, avoidance of the stimuli associated with the trauma, and increased arousal..

In the workplace, the condition may result in avoidable accidents, extended sick leave, and sometimes even behaviour that results in dismissal. This may also involve a major legal liability for the employer.

The demand for assistance from employers of former soldiers has been such that PTSD Resolution set up one-day seminars to help line managers, HR specialists and other staff to recognise the problems of trauma, however it was caused.

If employees experience the effects of trauma, it is important they understand that they are not “going mad” and that this is not a sign of weakness. The distress and other symptoms are a normal reaction to certain events; they can happen to anyone. Everyone has a threshold of tolerance beyond which trauma can occur.

Managers learn in the PTSD Resolution training that it is fine for an employee to talk about the event and the trauma, but it may not necessarily help. Treatment is needed. The sooner it is started, the faster will be the return to normal life. If an employee broke a leg, they would get it fixed professionally – it should be no different with mental health issues.

The employee’s doctor probably will not be a trauma specialist. In fact, the GP may have little or no knowledge of PTSD symptoms and may just offer anti-depressants. However, the latest medical thinking is opposed to medication for post-traumatic issues; sufferers should insist on seeing someone who is qualified to deal with the problem.

Managing PTSD in the workplace

There is a strong chance that with appropriate treatment anyone suffering from PTSD will experience a good recovery, with the proper help.
Directors of organisations need to develop a culture that is responsible about the issue of mental health: operational machinery is maintained regularly and repaired when necessary, so it is rational to adopt a similar approach with your people, at the very least.

If you manage a staff member who has experienced a potentially traumatic event of which you are aware, and their behaviour seems to have changed, it could be a sign that they need help.

It is an advisable precaution to let them know that you are aware of what they have been through, that the organisation’s policy is to be open about stress reactions, and to get help if necessary so that everyone can continue to work well together.

When an employee does not seem to be returning to their normal attitude and behaviour after a few weeks following an incident, it is a good idea to open a dialogue about how he or she would like to be helped to recover.

It is sensible to develop a relationship with an organisation such as PTSD Resolution that has experience of post-traumatic reactions and can deliver brief interventions that return people to work.

The cost of a typical course of treatment will certainly be much less than the expense of supporting an unwell employee down the line; or worse still, coping with the collateral damage if someone does something unfortunate, while traumatised, in the course of employment.

Piers Bishop is an organisational coach and psychotherapist, founder and clinical director of the charity for resolving UK Forces’ military trauma, PTSD Resolution, and co-founder of WeThrive, the staff wellbeing and coaching app. For further information on Trauma Awareness Training for Employers, visit www.ptsdresolution.org.

5 Responses to PTSD in the workplace: how to recognise it and support employees with the disorder