By Kath Burke on 1 Dec 2016 in Musculoskeletal disorders, Research, Return to work and rehabilitation, Occupational Health, Wellbeing and health promotion 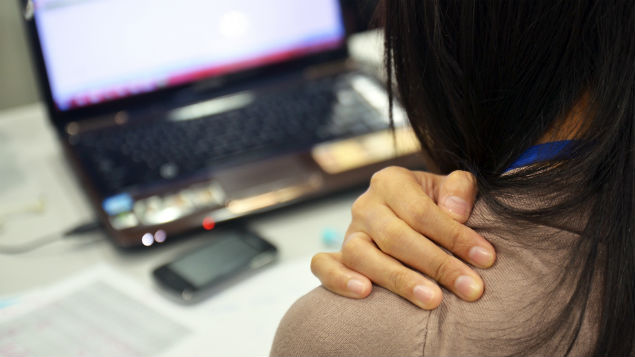 Having a desk job may knock years off your life through increased risk of diabetes, heart disease and obesity, but is it any worse than being a couch potato, and what can employers do to help?

These questions were raised by Alex Clarke-Cornwell, public health researcher at Salford University, who told the Work, Health and Wellbeing Conference that good-quality research is needed to clear up confusion over what to do to protect office workers from the perils of sedentary working.

First, Cornwell said that not all sitting is the same – we sit more still at our desks than we do when loafing around the house – and researchers are not sure what this means for our health.

Second, more reliable research into workplace interventions, such as sit-stand desks, is needed.

“We’re doing analysis to see if there are differences in health-related outcomes of sedentary behaviour at work compared to at home,” Cornwell told Occupational Health & Wellbeing.

“I think sit-stand desks are good to reduce sitting time, but the quality of evidence isn’t great so far, according to a systematic review. What people need is behaviour change strategies, such as moving the bin so it’s not near the desk, or standing up when you’re on the phone.”

Although Cornwell feels more energetic after a day’s work at her sit-stand desk, rather than a regular desk, she’s interested in the effect of activity “nudgers”, such as StepJockey, which sets employees stair climbing challenges on their phones.

In March 2016, the Cochrane Collaboration did a systematic review investigating workplace interventions for reducing sitting time. This review – covering 20 studies and 2,174 participants – found that sit-stand desks used alone can reduce sitting time by 30 minutes to two hours a day.

But how this translates into health outcomes is still unclear.

Larger trials with long-term follow-ups are needed on sedentary working, the reviewers concluded.

Chronic fatigue – from bedridden to full recovery is possible

Chronic fatigue sufferers can make a full recovery and go back to their job if they’re given specialist help early on, said chartered physiotherapist Jessica Bavinton.

Bavinton, who runs her own fatigue rehabilitation consultancy, Vitality360, told a workshop that giving sufferers incremental amounts of useful, non-urgent work from home can help reverse their down-ward spiral by boosting their activity, mood and confidence.

She reported on the case of a university academic who was bedridden when Bavinton started work with her, reliant on heavy pain medication, three carers a day, and a commode under the bed.

“She was bored sitting in bed. She has a great mind and she wanted to do something,” said Bavinton.

Under Bavinton’s supervision and with her employer’s support, the academic started doing “bottom of the pile” projects for just 30 minutes a day from her bed, and gradually increasing the time spent working.

Bavinton supplemented this with graded physical activity, altered pain management and other challenges to boost her confidence and social skills.

Within two years, the employee was back in her old job. Bavinton said the key was having a sympathetic employer that redesigned her role to exclude travel and people management, and allowed her to work from home when she needed to.

People with chronic fatigue have highly sensitised nervous systems, said Bavinton, which makes the normal working environment challenging. For instance, she advises clients to take solitary walks outside, and she negotiates for their workstation to be away from bright lights and noise.

“Be patient with timescales,” Bavinton said. “It’s not very helpful in a setback to just go in to work. Better to work from home or maybe delegate that work for a while. It takes a lot of proactive case management.”

Increasing numbers of working-age people are so worried about keeping their job that they are hiding their health issues from their employers, Stephen Bevan, head of HR research development for employment thinktank the Institute for Employment Studies, warned delegates.

Bevan told the conference that more than 60% of people with long-term conditions (LTCs) – such as musculoskeletal disorders – are their household’s main breadwinner, so rather than risk their job, they suffer in silence.

He warned employers to prepare for a sicklier workforce. An analysis of two studies – by Oxford Economics in 2012 and Vaughan-Jones & Barham in 2009 – predicts that by 2030, there will be nearly 24 million cases of LTCs among working-age people in the UK – with one in three of these cases representing two or more conditions in the same person.

The two most common LTCs are mental health (mainly depression and anxiety) and musculoskeletal disorders – each with seven million sufferers, says the research.
The other categories include multiple sclerosis, rheumatoid arthritis, Crohns disease, ankylosing spondylitis, epilepsy and fibromyalgia.

The problem for managers is that symptoms are largely invisible, variable and are worsened by anxiety, so Bevan advised employers to adopt a positive and flexible approach to LTCs, focusing on capacity rather than incapacity.

“We can’t just ‘do’ workplace adjustments ‘to’ people – they have both knowledge about and a stake in the good outcome for them and their boss,” said Bevan.

“Supported self-management, led by the worker, can improve confidence, support, recovery and productivity,” he added.