By Nic Paton on 1 Jun 2016 in Wellbeing and health promotion, Occupational Health 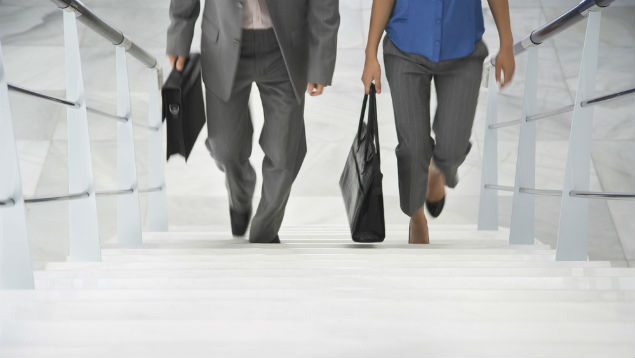 Staff wellbeing and productivity has been boosted at local authorities across Britain as part of a Department of Health-backed stair climbing challenge.

The StepJockey Local Government Stair Challenge, has seen local authorities from the south of England to the North East completing the first of four month-long health challenges in which staff use the stairs instead of the lift.

A total of 200 teams have burnt off nearly 400,000 calories by climbing around four million stairs in 50,000 journeys between them.

The initiative has been led by directors of public health, environmental officers and elected representatives, as part of a new push nationally towards “smarter buildings and more active working”.

StepJockey is a health tech start-up, which was seed-funded by the Department of Health in a bid to fight sedentary behaviour within the workplace. East Herts District Council had the highest average stair count per person, with all “players” completely substituting the lift for stair journeys over the course of a month.

Steve Whiteman, director of Public Health at the Royal Borough of Greenwich, which also took part, said: “As an employer we are committed to creating a healthy workplace for our staff and have been pleased at the enthusiasm shown by our staff towards this scheme.”

A second round of the challenge was set to start this month.

Elsewhere, employees at Leeds Beckett University are undertaking a virtual “walk to Rome” as part of a new innovative health and wellbeing initiative. The six-week “Beckett Steps” challenge will see more than 700 Leeds Beckett staff make a virtual 1,000-mile-long journey from London to Rome, recording their step count each day using pedometers.