Ethics and the vaccination of workers

By David Murana on 3 Jun 2014 in Research, Occupational Health, Wellbeing and health promotion 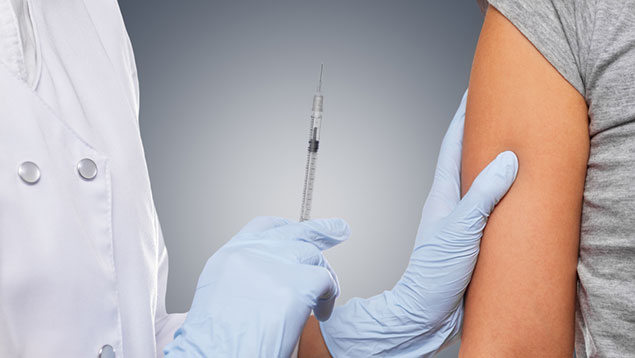 Occupational health practitioners are sometimes engaged in the vaccination of workers against vaccine-preventable diseases (VPDs). David Murana, from the London School of Hygiene and Tropical Medicine, looks at what practitioners need to know.

As vaccination can raise ethical and professional issues, it is essential to understand the reasoning behind vaccination, the scope of the problem of VPDs, the ethics relating to vaccination and the legal obligations of employers.

Scope of the problem

VPDs include pneumococcal disease, hepatitis A and B, measles, mumps, rubella, varicella zoster (chicken pox), diphtheria, tetanus, yellow fever, typhoid, meningitis and influenza. In healthcare settings, VPDs pose a risk to both healthcare professionals and patients, as well as to staff working with clinical specimens (Department of Health (DH), 2013).

Apart from healthcare professionals, it is recommended that prison workers who have regular contact with inmates are immunised against VPDs such as hepatitis B, and consideration should also be given to police officers and fire-and-rescue personnel based on adequate risk assessment (DH, 2013). Palmer and Cosgrove (2012) point out that there is consistent evidence of high morbidity and mortality caused by pneumococcal disease among welders, and therefore they should be vaccinated against this. It is recommended that sewage workers are vaccinated against hepatitis A based on a study carried out by Brugha et al (1998). Although a systematic review carried out by Glas et al (2001), did not confirm an increased risk of clinical hepatitis A in workers exposed to sewage, the DH advises immunisation of sewage workers.

Individuals travelling to countries outside the UK for work purposes are also at risk of exposure. Under normal circumstances they are offered a range or combination of vaccines, depending on their particular destination, such as: hepatitis A and B; diphtheria, tetanus and polio; or yellow fever and typhoid. The risk for those carrying out field work in environments of natural disaster, conflict and some scientific research environments is greater, when compared with that of travellers who stay in modernised environments while abroad.

There are two major ethical theories relating to biomedical or healthcare practice: deontology and utilitarianism. Deontology is grounded in the belief that certain actions are right and wrong, by the very value or nature of the action itself, regardless of the consequences. On the other hand, utilitarianism affirms that actions are right or wrong depending on whether the consequences are good or bad.

Although ethical principles stem from ethical theories, they are not generalised – instead, they are more specific. The four main principles of biomedical ethics are: respect for patients’/clients’ autonomy; non-maleficence (to avoid causing harm); beneficence (to do good); and to do justice (Beauchamp and Childress, 2013). Benefits of vaccination include the global eradication of naturally occurring small pox, the near eradication of polio and the reduction of the spread of various other diseases. However, vaccination in practice raises ethical issues.

OH practitioners are bound by codes of practice, including the Nursing and Midwifery Council (NMC) code Standards of conduct, performance and ethics for nurses and midwives (2008). Doctors’ main professional standards are set by the General Medical Council (GMC) in Good medical practice (2013).

Practitioners must seek consent from individuals before administering any vaccines or commencing any treatment or care. The practitioner should explain any risks associated with the action, such as the possible side effects of the vaccine. Risk communication is necessary for shared decision-making and evidence-based patient choice (Edwards, 2009).

Communicating risks could make some recipients of the vaccine concerned. According to Morris and Langford (1996), some risks are likely to raise more alarm, anxiety or outrage than others as a result of certain established factors known as “fright factors”. The purpose of vaccination is consistent with the ethical principle of beneficence, but communicating risks such as mild fever and aching arms, which is possible after the administration of most vaccines, could unintentionally cause harm. An individual may become alarmed or anxious, given that response to risks messages depends on the way in which individuals perceive risks (Fischoff, 1995).

Some would argue that if communication causes alarm or anxiety, this could in turn negatively influence vaccination uptakes or coverage, and therefore it may be beneficial to minimise risk communication in order to optimise vaccination coverage. This would, however, diminish the knowledge an individual had to make an informed decision or choice about having a particular vaccine, thus infringing the ethical principle of autonomy. Furthermore, not giving recipients sufficient information about vaccines could leave practitioners open to complaints, especially if significant side effects are experienced by a recipient. Failing to provide information about risks would be deemed as an act of omission, which is contrary to both the NMC and GMC codes of conduct.

In the modern world of multiple information sources and advanced technology, the public now has access to vast amounts of information – including varying reports about the efficacy and side effects of certain vaccines. This sometimes creates complexities for OH practitioners. The measles, mumps and rubella (MMR) vaccine, for instance, was once reported to cause autism based on one particular study. And there are still widespread reports that the seasonal influenza vaccine causes influenza, which is not supported by any evidence.

Individuals influenced by inaccurate information may refuse to be vaccinated, and in this circumstance the OH practitioner should explain the benefits and facts, and dispute any unproven assertions. In attempting to do so, the ethical principles of beneficence and justice could be seen in motion, as the practitioner would be trying to give as much accurate information as possible.

However, this could also be perceived as coercion or paternalism, which from a professional perspective – and using both the NMC and GMC codes again as an example – could raise concerns about breaching people’s rights to accept or decline treatment and care. Paternalism is considered as the replacement of one’s own judgment in place of another individual’s in order to promote that individual’s welfare (Buchanan, 2008).

Working in high-risk professions – such as in certain parts of hospitals or healthcare environments – requires proof of immunity to diseases such as hepatitis B and tuberculosis. Without documentary proof, employers normally have a policy to carry out screening with the aim of vaccinating non-immune individuals. This action is consistent with recommendations from the DH (2007).

Difficulties can arise if a non-immune individual decides against being vaccinated for religious, philosophical or other reasons. The OH practitioner must decide whether to respect the individual’s autonomous decision, which is both an ethical and professional obligation, or to make further recommendations to the employer that the individual should not be employed in a high-risk area.

Some would argue that given that vaccination is still a non-compulsory intervention in UK OH practice, the individual’s right to autonomy must prevail. However, it must be taken into account that the success of vaccination programmes resides in their ability to create herd immunity, and that herd immunity confers good for all individuals in the pertinent area or community (Dawson, 2004; Diekema and Marcuse, 2007). Furthermore, the utilitarian approach is for actions to be guided in ways that seek to achieve the greatest good for the greatest number. Despite this, other ethical principles – particularly that of autonomy – cannot be repudiated.

The issue of autonomy is relevant to the much-debated issue of whether influenza vaccination for healthcare professionals should be compulsory. Based on trials and observational studies, the influenza vaccine provides only moderate protection against infection and illness (Osterholm, 2011). However, it remains the most cost-effective national public health intervention in the reduction of mortality and morbidity associated with the infection (Mereckiene et al, 2010).

Every year, the Chief Medical Officer in the UK recommends that all frontline healthcare professionals with direct patient contact should be immunised, but the uptake is usually low. The figures from the 2012/13 national influenza programme showed that only 45.6% of frontline healthcare professionals with direct patient contact received the vaccine (Public Health England, 2013). Low uptake among this group has also been reported in the US and Canada (Mitchell et al, 2012).

The low uptake has generated ongoing discourse in some western countries (Behrman and Offley, 2013). In certain healthcare institutions in the US, mandatory influenza programmes already exist (American Medical Association, 2010). One of the key rationales is the need to protect vulnerable patients – such as the very young, elderly and immuno-compromised – from potential transmission of the infection by workers caring for them. The ethical argument is that healthcare professionals have a duty to protect and do good to their patients.

Case of nurse who refused vaccination

In the US, a pregnant nurse was dismissed after refusing mandatory influenza immunisation under the terms of her employment, despite the manufacturer’s warning that it was not clear whether or not the vaccine could cause harm to the unborn child, and also a warning from her midwife that the vaccine could do harm (Pow, 2013).

Some would take the view that this was an infringement of her autonomy – and that although she refused the vaccine, possible harm was nevertheless done to her, given the potential anxiety that the whole event would have caused. It must be remembered that healthcare professionals should also not be harmed in the quest to do good to patients (van Delden, 2008).

Had the nurse in question chosen to attend OH for vaccination, the OH practitioner would have then had a difficult decision to make in light of the midwife’s letter and the warning from the manufacturer. A reasonable decision would have been not to vaccinate as it was unclear whether or not the nurse or the foetus would have safely tolerated the vaccine. It could be suggested that the safety concerns would have supported the ethical and professional stance (not to do harm) for not vaccinating.

Mandatory influenza vaccination would likewise present significant issues for healthcare workers who are reluctant to attend OH departments simply to comply with a mandate. Even if written consent is given for vaccination by the individual, but with expressed reluctance, the OH practitioner might question whether or not it is morally or professionally right to vaccinate the individual.

It has also been documented that vaccination of healthcare professionals against influenza does not help protect patients, with a recent systematic review (Salgado et al, 2004) showing that influenza vaccines have a low effect on the reduction of influenza symptoms and the number of working days lost, with no evidence that they affect complications such as pneumonia or transmission of the disease (Jefferson et al, 2010). Furthermore, another recent systematic review by Thomas, Jefferson and Lasserson (2013) concluded that there was little evidence to suggest that vaccinating healthcare professionals against influenza prevented laboratory-proven influenza or related complications among over-60s who live in long-term residential care.

Where does this leave occupational health?

OH practitioners are sometimes engaged in the vaccination of workers to provide protection against VPDs for those working in high-risk areas. Having vaccination programmes in place is evidence of part compliance by employers with UK health and safety legislation.

A number of ethical and professional issues can arise in the process of vaccination, although these issues would differ between cases. The application of professional codes and ethical principles in the context of vaccination may appear challenging, but OH practitioners must endeavour to understand and apply them at all times in practice to ensure that any actions taken can withstand scrutiny.

Pow H (2013). Pregnant nurse, 29, is fired because she refused to have flu shot to protect her unborn child after midwife warned her it could hurt the baby. Mail Online.

David Murana is an assistant at the Faculty of Infectious and Tropical Diseases, London School of Hygiene and Tropical Medicine.
View all posts by David Murana →
Previous Article
Next Article

One Response to Ethics and the vaccination of workers