Getting staff to work together with HealthyTeams 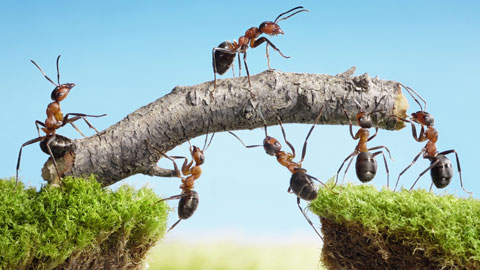 A new wellbeing programme is helping to create a true team spirit in the workplace. Occupational Health magazine finds out how.

Team building is nothing new – it has been talked about for years as a motivational tool for helping engender business productivity. However, it is not often discussed in the realms of employee wellbeing.

Of course, wellbeing is currently a hot topic on the agenda, being tackled by both public and private organisations through a wide range of initiatives. But generally, these initiatives aim for a broad-brush approach, encompassing everyone in the organisation in one go. That makes them more difficult to implement from the outset, with company-wide buy-in required. It also often means they require quite significant financial investment which, in these times of economic hardship, can be off-putting.

Founder of Wellbeing4Business Ltd Mark Holt-Rogers, who has focused on wellbeing in the workplace for the past 15 years, believes a simpler approach is required. He certainly is not questioning the value of company-wide wellbeing schemes, but does think they need to be complemented by a more “localised approach”.

“But what we’ve realised in the past few years is that while employers want to look after the wellbeing of their people, they want to do that in the most cost-effective way possible. It’s almost a case of taking on the challenge in bite-sized chunks. And employers want to be able to implement initiatives without too much set up and process.””I firmly believe that happy, healthy people are more effective people, and the work we do with a number of large organisations focuses on that mantra with great success,” says Holt-Rogers.

Working in partnership with a number of clients, Wellbeing4Business has spent the last year building a new tool that will enable organisations of all sizes to implement initiatives that achieve real results quickly. It is a web-delivered solution called HealthyTeams, which focuses on different challenges that engage with people.

“The other crucial thing about the HealthyTeams approach is that it sets small, but achievable, goals,” says Holt-Rogers.

“It’s not about everyone running a marathon – although if they want to do that they can. It’s simply saying that there are small things we can all do to be more healthy each day. And then making that accessible in a way that is genuinely motivational.”

For a fixed fee per challenge, with no restrictions on the number of participants, the HealthyTeams web portal allows organisations to run team-based wellbeing challenges efficiently and effectively.

As the scheme is charged at a cost per challenge and not per person, it is affordable to an organisation without the need to limit participation.

As the scheme is charged at a cost per challenge and not per person, it is affordable to an organisation without the need to limit participation.”

Participating teams can track and compare their progress through league tables on the HealthyTeams portal, which also shows the organisation’s overall progress, top teams and top individuals.Each challenge lasts four weeks, which is long enough to see improvement but not too onerous on an organisation’s time. The challenges can be used to motivate employees in just one building or site, or on a regional, national or international scale.

Podcasts and videos explain how to attain personal goals, giving the individual participants the tools they need to implement small changes that will benefit their health and productivity.

The challenges that companies can pick from include “Weight Loss”, “Get Active”, “Resilience”, “Get Active Charity” and the “Workplace Cycle Challenge”, with the winning team receiving the HealthyTeams Cup. Employers can also award their own prizes, recognising team members who have made a special effort to improve their personal, team and corporate health and wellbeing.

“So it’s all about teamwork and competition, as the members of the Wrightington, Wigan and Leigh Foundation NHS Trust found out when they piloted the scheme in 2012,” says Holt-Rogers.

Wrightington, Wigan and Leigh Foundation NHS Trust ran the HealthyTeams “Weight Loss” challenge in the summer of 2012 and, over the four-week period, lost nearly 40 stone (250kg) overall, with the top team losing 3.58 stone (22.78kg) in total.

During the challenge, staff were encouraged to participate in a variety of activities that were designed to promote wellbeing and build teamwork.

Jenny Williams, head of HR business services for the trust, thinks the reason the weight loss challenge was so successful for her business was because it was so easy to implement – and it did not feel daunting to those who wanted to take part.

“It wasn’t about some massive and strict programme over a long period of time,” she says. “What made it hugely appealing was the fact that it was for just four weeks. And it wasn’t about seriously changing lifestyle. It focused on thinking about how we live and how that affects our wellbeing.

“The support from HealthyTeams in getting the challenge started was brilliant. Tips like drinking more water and not eating after 7pm – while not always feasible for everyone – were really helpful in setting simple and achievable goals.

Williams adds: “We all know that any sort of wellbeing activity is going to have an initial enthusiasm and then the appeal will wane pretty quickly. But with more than half of those who signed up sticking with the challenge to the end, it was very encouraging. The fact that the cost of the challenge was not based on individual participation is also important for the same reason. It’s very hard to justify to a board investment in a wellbeing initiative that is costed per person, because they will know that a good proportion of that cost will be wasted.

“Having completed this first challenge, we are now thinking about what else we could do with HealthyTeams to keep the success going.”

Tapping into the Olympic spirit

Another organisation that immediately saw the benefit of the simplicity of the HealthyTeams challenges was the HR department at Liverpool University, which decided to take up the “Resilience” challenge in August 2012.

As Carol Mills, director of HR explains, there was already a healthy competitive spirit in the department – but the HealthyTeams challenge added a whole new level of positive competitiveness, with some important benefits that went well beyond just wellbeing and weight loss.

“We got involved with the HealthyTeams challenge just as the Olympics had finished. Who wouldn’t be inspired by the success, not just of Team GB, but all competitors in the Games? So we decided to take that as our theme,” says Mills.

It’s been a really interesting exercise for us as an organisation, and we are certainly thinking about how the challenge approach can be applied to other parts of our organisation in the future.”

With support from HealthyTeams to understand some of the more simple ways employees could make a difference to their health and wellbeing, the pilot began. Each team had its own name and identity, taking inspiration from the Olympics – there was the Five Fit Non-Blondes, the MoFarathons and the Healthy Stars – and posters were even created.”We started by putting out a message to everyone in the HR department to see what take-up we would get, and were actually pretty overwhelmed by the enthusiastic response – there was even competition about who would be in which team.”

Team entrants were tasked to complete five daily tasks, each worth one point. There were five points available each day – 35 per week – per person.

“The lowest individual score was 55% task completion each day which, when you think about it, is pretty incredible given that people usually lose interest in wellbeing programmes,” says Mills.

“And overall, we scored an average of 87% task completion, which equates to more than four out of the five tasks being completed daily by each person. People really stuck with it.

“While wellbeing and weight loss were probably the main motivators for going for the challenge in the first place, the benefits have been much broader. For example, one individual who, at his own admittance, had a pretty unhealthy lifestyle, bought himself an exercise bike. Now, with encouragement from his children, he is ‘cycling across America’ based on the number of miles he cycles a day. And his kids are plotting his journey on a big map.”

The challenge also engendered a stronger team spirit in the organisation, with one apprentice saying that he felt it had broken down barriers between him, at his junior level, and the more senior members of the HR department. The tracking and reporting involved in the challenge also meant colleagues were always talking about what they had been doing, and Mills says she has noticed an increased level of communication within the team more generally.

“It’s been a really interesting exercise for us as an organisation, and we are certainly thinking about how the challenge approach can be applied to other parts of our organisation in the future,” she adds.

Holt-Rogers says: “HealthyTeams has delivered real results for the organisations with which we’ve already worked.

“But what will be particularly interesting for us in the next year is to see how the flexibility of the tool to not only motivate but also monitor employee wellbeing could respond to the various Government initiatives that are currently focused on employee wellbeing, including the possibility of public reporting as part of a corporate responsibility agenda.”

To find out more about HealthyTeams, visit the HealthyTeams website or call 01257 451487.