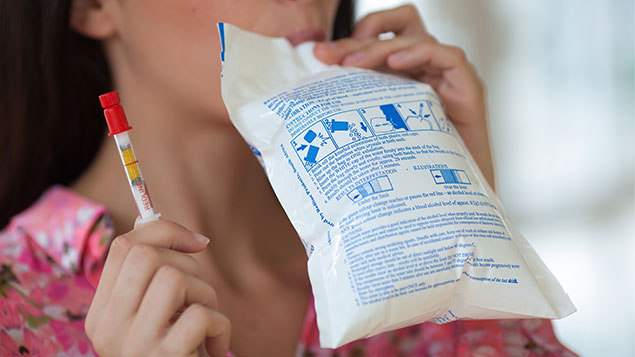 Barratt Developments recently announced it would introduce randomised drug and alcohol testing for staff to combat increased risks on building sites. But introducing such a policy is not without its challenges, as Katherine Maxwell from Moore Blatch explains.

How to carry out drug and alcohol testing of employees?

Figures from the Office for National Statistics show that around one in 12 adults aged 16 to 59 in England and Wales took an illicit drug in the past year. They also show that 57% of adults drank alcohol in the week leading up to the survey, taken in May this year.

In the worst cases, the associated problems that come with taking drugs, or drinking to excess can extend to the workplace. Employees who abuse alcohol or drugs are likely to suffer greater absenteeism, display poor performance and have an increased risk of accidents.

Guidance from the Health and Safety Executive is clear for employers, stating that they could be breaking the law if they knowingly allow drug-related activities in the workplace and take no action.

“In a high-risk industry like construction, drugs and alcohol and work are not compatible,” a spokesperson for the firm stated.

To many employers, the rationale for introducing drug and alcohol testing may seem straightforward as alcohol and drugs impair the ability to carry out even simple tasks.

However, implementing a testing policy is far from straightforward.

Of course, there are industries where the introduction of a testing policy is unlikely to be challenged.

But what about industries where the threat to safety is less but where an employee error due to drug or alcohol misuse could be severe?

Catastrophic safety risks are far greater in high-risk jobs but it’s an uncomfortable truth that most accidents happen in more mundane situations.

Employers have a general duty under the Health and Safety at Work Act 1974 to ensure the health, safety and welfare of employees while at work.

If an employer knowingly allows an employee under the influence of drug misuse to continue working and his or her behaviour places the employee or others at risk, the employer could be prosecuted.

So if an employer feels there is a justifiable health and safety risk, how should it implement a drug and alcohol testing policy?

Firstly an employer must ensure that an alcohol, drug, substance abuse policy forms part of their overall health and safety policy.

Once this is in place, introducing testing needs to justified, necessary and proportionate. For example, this could be because there is a health and safety risk or potential to cause serious damage to the business.

Employers should be able to support a testing policy if they can demonstrate that drug or alcohol misuse has already contributed to health and safety issues at the business, or comparable businesses.

The evidence for this could include: accident records and near misses or conduct issues that could predictably lead to an accident. Evidence also needs to identify specific business areas where there is a safety concern, as company-wide testing may not be justifiable.

Having established risk and concluded that testing is necessary then managers must engage with employees so they are fully aware that testing is going to be introduced. This could include training, group sessions or seminars.

Organisations’ testing policies must specify the blood-alcohol/drug levels that will constitute a breach and the consequences of exceeding those levels. Also, employees should be made aware of information and support available and be reassured that issues will be dealt with in confidence.

There should be training for supervisors and managers to recognise the signs of misuse and steps they should take to address this. Also, introduce a confidentiality policy to encourage people to come forward. And, if applicable, consult union appointed safety representatives.

As with all HR policies, drug and alcohol testing needs constant monitoring and re-evaluation. Companies’ policies and procedures must evolve when necessary or come to a stop. For example, policies need to be in place for new joiners.

There are also GDPR considerations. The amount of personal information obtained needs to be minimised and employees should be told which drugs are being tested for and only test for drugs that could impact health and safety.

If random selection is being applied it must be genuinely random or if a specific individual is under suspicion they must be told why. Testing should only take place with the aim to ensure health and safety in the workplace – it should not be designed to reveal whether or not an employee is using illegal substances in their private life.

Employers must also ensure that testing is of sufficient technical quality and subject to rigorous quality of control procedures. Any testing must also be overseen by someone who is suitably qualified.

Finally, organisations should be prepared for disputes. They must ensure that when a test is conducted there is a duplicate available for the individual to undertake independent testing if desired.

Communication is key. Employees should be reassured that the policy is being introduced for their collective safety and not to try and catch them out. Companies should clearly explain the hazards they are trying to protect employees against, and should remind them that everyone’s safety is paramount and must not be compromised in any way.

One Response to Drug and alcohol tests: what employers need to know