A third of lone workers (33%) feel their organisation prioritises deadlines and financial targets over worker safety, a survey has suggested.

The poll of 1,300 lone workers and health and safety professionals by Cloud-based monitoring service StaySafeApp.com concluded there was a wide gap between how effectively companies felt they were supporting their lone workers and what lone workers perceived.

Nearly all companies (94%) gave themselves a 10 out of 10 rating for how seriously they took the safety of lone workers, whereas just 45% of lone workers felt the same.

However, a significant minority (17%) took no action at all. In addition, the research indicated that companies were often overestimating how well they have dealt with hazards or incidents.

Managing loneliness among lone workers and those on sick leave

Managing the risks to lone workers

More than three-quarters (78%) of executives said they had addressed their employees’ concerns to a ‘great’ or ‘fair’ extent, yet only 45% of lone workers agreed.

Only around a third (36%) of lone workers spoke to their employer when they had felt unsafe at work. However, most companies were unaware, with nearly all (92%) believing their lone workers were speaking to them regularly about any incidents and concerns.

Don Cameron, CEO of StaySafeApp.com, said: “The considerable under-reporting of hazards is a major concern for health and safety executives, particularly as they seem unaware that their staff aren’t having these conversations.

“Under-reporting can lead to employers under-estimating the real level of risk faced by staff on a daily basis and failing to put in the necessary protective measures to prevent accidents or incidents.

“In light of the findings in our report, organisations should undertake a review of their current lone worker safety measures, communications and training to assess their effectiveness from both an organisational and lone worker point of view, as research shows this may differ considerably,” he added. 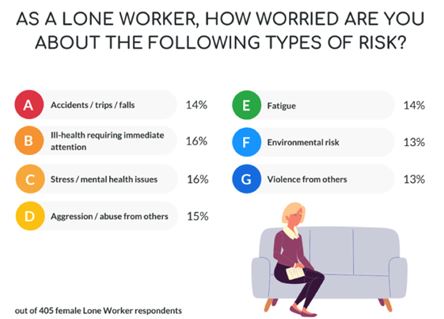 Nic Paton is consulting editor of OHW+. One of the country's foremost workplace health journalists, Nic has written for OHW+ and Occupational Health & Wellbeing since 2001, and edited the magazine from 2018.

Five-day Covid isolation may not be enough to curb transmission

Warning on risks of driver dehydration

Drug and alcohol testing no big deal, even...

Personal safety is not just for lone workers

Working in a heatwave: what should employers consider?