By Miles Atkinson on 18 Mar 2016 in Musculoskeletal disorders, Return to work and rehabilitation, Occupational Health 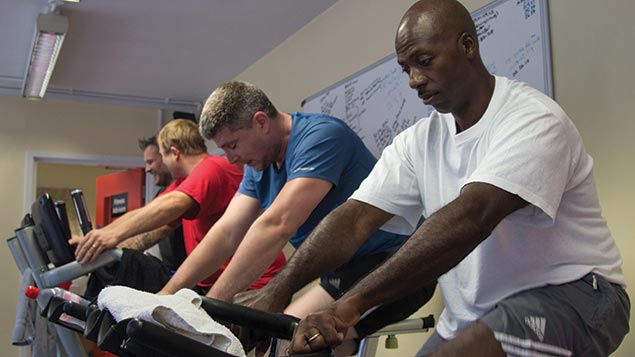 Almost 100 LFB staff have been through a work hardening programme.

What is a functional restoration programme?

These exercises or tasks are structured and progressively graded to increase psychological, physical and emotional tolerance and to improve endurance and work feasibility. In such environments, injured workers improve their general physical condition through an exercise programme aimed at increasing strength, endurance, flexibility and cardiovascular fitness. An FRP consists of goals that are designed to:

What does an FRP entail?

An FRP uses a biopsychosocial approach to deal with a multi-factorial problem. It is best delivered using a multidisciplinary approach and as part of a structured and tiered OH service provision.

The delivery of an FRP can vary and will be dependant on the specific constraints and demands placed on the organisation and the individual. An FRP includes the following key components:

What does research say about FRPs?

Research has suggested that WHPs are the most effective route to a cure for chronic musculoskeletal disorders.

This questionnaire is designed for people with regional pain problems that are affecting their performance at work, causing them to take short spells of absence, or for those who are currently off work and have been so for up to 12 weeks. The 21 questions concern: attitudes and beliefs; behaviour in response to pain; perception of work; and activities of daily living.

The Visual Analogue Scale can be used as a way to quantify a patient’s perception of pain. The patient is asked to score their pain on a scale of 0 to 10. This test can then be used at repeated intervals to monitor change.

This is a standardised measure of health status often referred to as a “quality of life” questionnaire. It is normally measured at the start and end of treatment and comprises an assessment of five main areas: mobility; ability to self-care; ability to undertake usual activities; pain and discomfort; anxiety and depression. These categories are rated on a five-scale system ranging from no problem/pain or anxiety to unable to perform/extreme anxiety/extreme pain.

It also supports the inclusion of WHPs as part of an OH programme. There have been a number of studies into the effectiveness of general strengthening, exercise and work hardening programmes on the rehabilitation of an injured person.

The majority of this research has concentrated on low back pain, which accounts for 35% of an OH caseload worldwide and a similarly high proportion of the associated costs.

Lindstrom et al also found that those who received work conditioning had significantly less sick leave due to lower back pain one year after the programme. Furthermore, it has been noted that on receiving work hardening individuals had a lower rate of further healthcare visits that those who did not receive work hardening. This lower rate of subsequent healthcare visits or treatment was also noted by Catchlove and Cohen (1982).

More recent reviews of research into the effectiveness of work hardening and work conditioning programmes have been carried out with favourable findings. This includes that of Lechner (1994), who found evidence to show that WHPs accomplished their stated goals, produced a higher percentage of returns to work and earlier returns to work. The Cochrane review carried out by Schonstein et al (2003) found work conditioning/ hardening to be beneficial in reducing the number of sick days in individuals with chronic back pain.

Finally, although there is no clear evidence on the exact content of a WHP, as would be expected with the wide range of conditions and settings that it is used for, there is consistent evidence to support that such interventions are more effective in an occupational setting. There is a range of thought as to why this is the case, but by engaging an injured person in their actual work environment, they also benefit from increased social interaction with work colleagues, get re-accustomed to the routine of work, and have increased motivation to return to work.

London Fire Brigade (LFB) has been experiencing a relatively high prevalence of long-term absence with employees suffering from chronic musculoskeletal problems. While there is an effective acute physiotherapy service provided as part of the OH programme, the chronic nature of some of these conditions required a more targeted and intensive intervention.

Crystal Palace Physio Group (CPPG) are the current providers of onsite OH physiotherapy services to the LFB. But in November 2013, a targeted FRP was implemented in partnership with OH provider Health Management and CPPG – with the aim of assisting and facilitating employees suffering from long-term sickness and recurrent musculoskeletal disorders to get back into the workplace.

The FRP is delivered by an experienced OH physiotherapist, supported by two fitness advisers. It is a rolling six-week programme and suitable participants are selected from “long-term sick” and “light duty” lists (employees at work, but not performing substantive operational duties) and invited to join the programme.

Five FRPs were delivered in the eight months between November 2013 and June 2014, which enables a comparison to be drawn between six months pre- and post-FRP absence rates.

In order to measure the effectiveness of the programme, a number of validated outcome measures needed to be applied. Some of these included:

Benefits to the London Fire Brigade

When carrying out a return-on-investment calculation based on these figures, the results are striking. On the preliminary result, the estimated return on investment equates to £27 saved for each £1 spent.

Mr Paul Manley was referred into the programme following a high-speed car accident in June 2014. He sustained multiple injuries including rib fractures. He was seen by the OH physiotherapy service for an assessment and it was soon recognised that he would need further assistance. He was then referred into the FRP at the LFB.

A brief background of his condition

“I had an RTC [road traffic collision] while stationary and got hit from behind at approximately 80mph causing back and neck problems and a few fractured ribs.”

How was your condition affecting your lifestyle both at home and work before the programme?

“Terrible, I was unable to do anything, between the neck and back pain and painful ribs. Frustrated and in pain does not describe things.”

How did you become aware of the programme?

“I was made aware after seeing the fire brigade physio for a check-up.”

What were your thoughts before joining?

“I was very sceptical. I trusted the brigade physio but I had been receiving private physio and was getting nowhere fast and still in lots of pain and restricted in movement.”

What were your thoughts during the programme?

“Each session opened my mind with different ways to approach things, exercises I was shown and the lectures giving me better knowledge and understanding of my condition.”

How did you find the programme itself (content, structure, group interaction)?

“Very well thought out and each week felt as though I was making progress and gaining knowledge. I had some setbacks but that was nothing to do with the course.”

What were the outcomes?

“Amazing, could not thank Jenny [the physiotherapist] enough for all her time and effort in providing such a professional service and allowing me to get back to work so much quicker than my private physios and doctors were saying.”

What did it mean to you?

“Everything; I am very active and it was killing me and I was angry and frustrated with my progress.

“Jenny gave me every bit of support and skills to progress my recovery quickly and safely and has given me some great exercises to continue aiding my recovery, along with knowledge. If it was not for this course, I may not even be back at work now so this course meant everything to me and the brigade has gained from allowing this to run.”

The Cochrane Collaboration (2013). “Physical conditioning as part of a return to work strategy to reduce sickness absence for workers with back pain”.

The Office for National Statistics (2014). “Full report: sickness absence in the labour market”.