Number of sick days falling, but UK still takes most in the world

By Personnel Today on 5 Sep 2013 in Latest News, Occupational Health 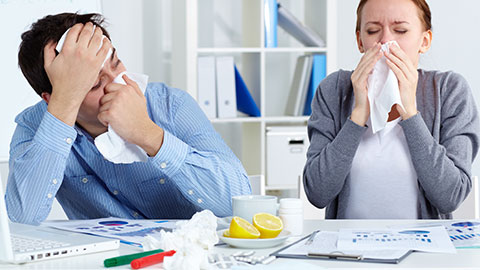 Sick days are costing UK business nearly £29 billion a year as UK workers take more than four times as many days off work sick as those in other countries, research by consultancy PricewaterhouseCoopers (PwC) has concluded.

However, a study by the CBI and pharmaceutical giant Pfizer has ­argued that UK business gained £3 billion last year as employees took fewer days off work than ever previously known.

The contradictory signals follow research published in August’s “Occupational Health” by XpertHR that suggested a five-year decline in rates of absence has come to a sudden halt.

The PwC research has calculated that UK workers average 9.1 days off from their jobs each year because of sickness.

This, it said, was nearly double the amount workers in the US take (4.9 days of sickness a year), four times more than their counterparts in Asia-Pacific (2.2 days) and higher than Western Europe (7.3 days).

Sickness accounted for around 90% of UK firms’ absence bill, with much of the rest taken up by compassionate leave and industrial action.

Therefore, the associated cost of staff sickness had also risen, it ­argued, with sick days now accounting for £28.8 billion of the UK’s overall £31.1 billion absence bill.

Technology companies had the lowest level of sick days of any sector at an average of 3.4 days. This was about three times lower than public-sector workers (11.1 days), with retail and leisure and engineering and manufacturing workers averaging nine and 8.7 days respectively.

Jon Andrews, human resources consulting leader at PwC, said: “With the demographics of the workforce rapidly changing as many people are now having to work far longer before they retire, companies are likely to see a greater level of sickness if they don’t start addressing this issue now.”

However, PwC’s gloomy prognosis was questioned by the CBI/Pfizer Fit for Purpose survey.

It argued that the average absence rate was 5.3 days in 2012, down from 6.5 days in 2010, in the process saving businesses £3 billion, although overall absence was costing the UK economy £14 billion.

Mental health conditions were again cited as the single most widespread cause of long-term absence from the workplace.

Almost £1.8 billion was lost from an estimated one-in-eight sick days taken for non-genuine reasons, it calculated.

On a separate note, two-thirds of the employers polled claimed the fit note is still not being used to its full potential.

Neil Carberry, CBI director of employment and skills, said: “The fit note is designed to stop doctors signing workers off sick too readily, when staff could get back to work with the right support.

“It’s clear that it’s fallen short of expectations and to date is not being used much differently to the old sick note system.”

One Response to Number of sick days falling, but UK still takes most in the world