By Jo Faragher on 10 Oct 2018 in Health and safety, Latest News, Mental health 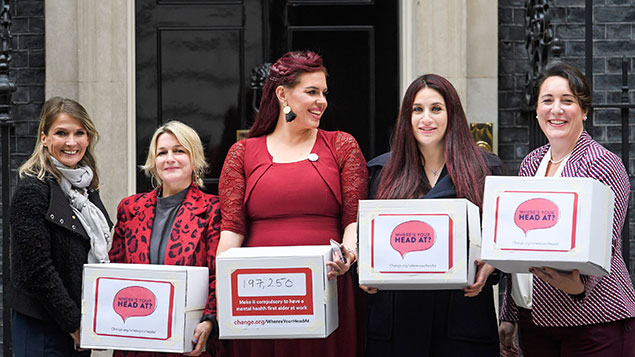 Mental health campaigners and businesses have delivered a petition to Downing Street calling for it to be compulsory to have mental health first aiders at work.

Businesses must by law provide medical first aiders, and the petition calls for Sarah Newton, the minister for disabled people, health and work, to update the Health and Safety at Work Act to extend this to include mental health first aiders.

Outlining her campaign, called ‘Where’s Your Head At?’, Devon recounted her own experiences of mental ill health at work. “The workplace is where we spend most of our adult lives but unfortunately it’s also a place that, in my experience, mental well-being is the most neglected,” she explains on her campaign page. “We feel the need to soldier on when we are struggling with mental illness in a way we never would if we had the flu or broken a leg.”

“And this is reflected in our laws. Under the Health and Safety at work act, most workplaces have to train someone in medical first aid – it means if we come to work and end up getting hurt or sick, there’s someone that knows what to do.

“Unfortunately, despite statistics showing one in four of us struggle with mental health every year, most workplaces don’t have anyone on hand that knows how to help.”

The campaign has received widespread support on social media and has been backed by celebrities such as Countdown’s Rachel Riley and a number of other MPs. Employer backers include Ford, WHSmith, Bupa and Hogan Lovells.

The Stevenson/Farmer Review of mental health and employers, published last October, revealed that around 300,000 people with mental health issues drop out of work every year.

The government has today also marked World Mental Health Day by appointing its first ever minister for suicide prevention. Health minister Jackie Doyle-Price will take on the new role, which aims to tackle the stigma surrounding suicide.