By Nic Paton on 28 Jan 2015 in Occupational Health 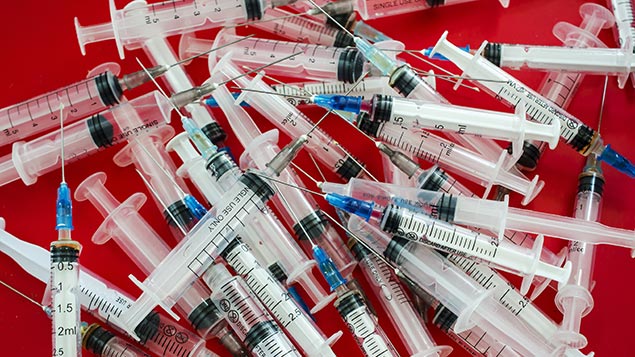 Healthcare workers continue to be at risk of exposure to blood-borne viruses through occupational sharps injuries, with reported cases increasing, Public Health England (PHE) has warned in a damning report.

This is despite awareness of the risk of sharps injuries, safe practices being much more widespread, and the fact safety-engineered devices to prevent such injuries are now widely available, it has added.

In its latest report on exposures to a blood-borne virus (BBV), PHE said cases reported had increased among healthcare workers from 373 in 2004 to 496 in 2013.

The updated Eye of the Needle report, which was first published in 2012, found that, over this 10-year period, approximately 30% of exposures involved a source patient infected with HIV; 54% involved hepatitis C (HCV) and 9% hepatitis B (HBV).

Of these exposures, 81% were sustained by doctors, nurses and healthcare assistants and 65% occurred during clinical procedures. A total of 78% of exposures involved a percutaneous needlestick injury, the majority of which were sharps injuries involving a hollow-bore needle, it added.

There have been numerous new laws to protect healthcare workers from exposure to BBVs, notably the EU 2010 Sharps Directive and the UK 2013 Sharps Regulations.

Eight of these nine received antiviral therapy, of whom seven were known to have achieved viral clearance.

One good bit of news was that HBV immunisation programmes across England, Wales and Northern Ireland were effectively protecting healthcare workers, with no new cases reported.

Dr Fortune Ncube, head of the BBV department at PHE, said: “It is a disappointment that we still continue to see injuries to healthcare workers occurring after the procedure, in the period prior to and during disposal. These injuries are entirely preventable.

“We want to remind all healthcare employers to comply with the regulations regarding safer working conditions and to provide safety devices to healthcare workers in an effort to reduce sharps injuries and protect them from infection.”

Jill Holmes, infection prevention control nurse specialist and Infection Control Society representative on the Safer Needles Network, added: “Safety-engineered devices are not foolproof. Unless they are used correctly, these devices will not be effective or prevent sharps injuries. It is vital that healthcare providers train new and existing staff in their correct use. It is also essential for all staff to remember the importance of basic sharps safety.”