Are sit-stand desks the solution to back pain at work? 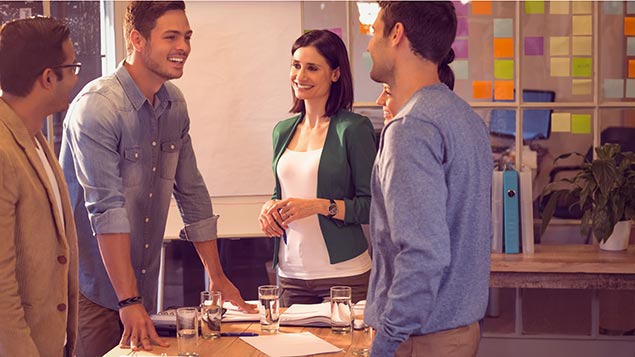 Sit-stand desks have been hailed as the answer to back and neck pain at work, but what is the evidence that they are effective? Virginia Matthews investigates.

Although the potential hazards of sitting down for prolonged periods have fuelled a plethora of global research studies, irrefutable scientific evidence has proved harder to come by.

In recent months though, the debate over sedentary behaviour and its impact on health – everything from an increased risk of type 2 diabetes to higher rates of heart disease and obesity – has finally “got off its behind”.

June 2015 saw the publication of a statement commissioned by Active Working CIC (owners of the Get Britain Standing campaign), with support from Public Health England (PHE), which set out to provide “Guidelines for employers to promote the avoidance of prolonged periods of sedentary work”.

The statement, which prompted blanket media coverage, concluded that office-based workers should make progress towards an initial target of two hours of standing, light activity or walking during the course of each working day and should aim to double this to four hours over time.

While the guidelines thus far represent, says PHE, an “extrapolation of the evidence to date”, it believes that further direction for employers will be required as more research is undertaken and analysed.

Launched in September 2014, and backed to the tune of £524,429 by the Department of Health (DH), the so-called Stand More At Work or “SMArT” project currently being led by a research team at Loughborough University hopes to not only provide such evidence, but to prompt a more radical rethink of how we work and live.

While concern over our sedentary lifestyle dates as far back as the 1950s – when bus drivers were found to be more susceptible to heart attacks than bus conductors – the DH draws on a 2012 review of evidence from the Universities of Loughborough and Leicester, which brought together research from around the world involving almost 800,000 people.

The review, published in Diabetologia in early 2013, found that people who sat the longest had a:

Further information can be found here.

Set up as a three-year, randomised cluster trial of so-called “sit-stand” desks, SMArT will study the work patterns of 240 support workers, 120 of them acting as the control group, based out of three Leicester hospitals.

The initial aim is to prove that staff can “feel more energised and better psychologically” simply by getting on their feet more often.

Although Dr Ben Jackson, research associate
in health, psychology at Loughborough University and his team point to Scandinavia, where more than 80% of employers already offer sedentary staff the choice of sitting or standing while they work – here, the figure is less than 1% – he says that the case for height-adjustable desks has not yet been made in the UK.

“It’s been said, a touch glibly, that sitting is the new smoking, but our intention is to encourage staff to intersperse sitting with standing and walking around and not to demonise sitting altogether.

“Our research suggests that some people are already concerned that their employers may expect them to stand all day and this is making some of them resistant.

“It is absolutely not our intention to stop employees from sitting down at work and the sometimes-histrionic headlines which suggest otherwise are doing us a great disservice,” he adds.

The SMArT study suggests that the interspersing of periods of sitting with standing
and light walking – something which the vast majority of office workers are thought able to achieve – is the key to improving better employee health.

By standing for just 10 minutes every hour, Jackson’s team believes that office workers can “quickly feel both the mental and physical benefits of allowing blood and oxygen to flow more freely through their bodies.”

Phase one of the SMArT research is qualitative: establishing the barriers to sitting down at work; exploring how to enlist the support of HR, OH teams and managements; and holding focus groups to explore staff reservations.

The implementation phase, which begins this October, will see the installation of height-adjustable desks supplied by the manufacturer Varidesk UK and the resulting data will be collected at three, six and 12-month intervals.

In January 2015, leading Canadian cardiologist and senior scientist at the Institute of Clinical Evaluative Sciences in Ontario Dr David Alter published a study that concluded “prolonged sedentary time was independently associated with deleterious health outcomes regardless of physical activity”.

Circulated in the Annals of Internal
Medicine, as a meta-analysis study, Alter’s review suggested that the amount of time a person sits during the day is associated with a higher risk of heart disease, diabetes, cancer and death regardless of their commitment to regular exercise.

Virgin Media’s Sheffield contact centre began a trial of sit-stand desks last April in conjunction with the University of Chester.

While the 12-month experiment was launched with just 24 employee participants – all of whom volunteered to use adjustable desks and stand for a minimum of two hours a day – the company says that if results are sufficiently impressive, sit-stand desks will be made available.

Like Google and Microsoft, both of which already offer sit-stand to those who request it, Virgin Media envisages bringing in adjustable furniture as a voluntary option rather than a mandatory requirement.

For the Reading-based software supplier VM Turbo however, which introduced overheight desks last year, there is no question of returning to what office manager Elaine Newland calls “the old couch-potato way of working”.

“All 25 of our salespeople work at what we call ‘buses’ – very tall, standing desks costing around £200 each with chairs (£135) to match – and every single person has reported feeling more alive and more assertive at desks which, in effect, allow them to stand.

“The fact that people are now able to stretch their legs and move around as they work or make phone calls has made a massive difference to the office atmosphere and I don’t believe there is any going back,” she says.

Newland adds that taller staff members have reacted particularly well to the extra space and notes that with the firm currently hiring, it is buying between two and three new “buses” every month to keep up with demand.

The SMArT team is convinced that regular standing can make desk-based personnel feel more mentally alert, more confident and better able to collaborate with colleagues, but it is more cautious when it comes to the question of added productivity.

“I recognise that the potential for greater productivity would be of particular interest to the HR community and this can be measured in a number of ways,” says Jackson.

“We will certainly be looking at self-reporting as a first step: staff feeling themselves to be more productive when standing at their desks, for example. Beyond this, it may also be possible to measure memory recall and to use other established cognitive ability tests to compare sitting with standing, but that is a long way off at the moment.”

A new way of working

He says: “You don’t need a fancy desk to get your people to move about more, nor do you need any diktats from HQ telling them off for sitting and building up staff resentment as a result.”

Although Stuart does not dispute the belief that what he calls “‘the sedentary epidemic in the modern workplace’ is an issue of immediate concern”, he says that solving it requires fundamental cultural change.

“Employers should be looking at simple and inexpensive adjustments to office design, not great heavy pieces of kit, which in some cases are too big and expensive to be a practical solution.”

Among his suggestions are “posing shelves” – simple, wall-mounted ledges which encourage staff to take a standing break or get to their feet while making a call – and regular standing meetings.

“By encouraging telephone conversations or video conferences to take place on foot, by offering sit stand desks, breakout spaces, privacy pods and quiet zones, workers will automatically move, stand and be more active without having to be told,” he argues.

While Jackson believes that there is already sufficient evidence to make us leap to our feet more often, he does not relish the inevitable price war that will ensue if his research project gives sit-stand desks the
thumbs up and stresses that the SMArT project should not be seen as endorsing one individual product.

For any employer already tempted to replicate all-day sitting with all-day standing, Jackson also sounds a note of caution. “All the evidence available suggests that a lot of back pain and related musculoskeletal problems come directly from too much sitting and too little movement. “But while we know there is an impact on backs and spines from spending long periods hunched over a desk, we have yet to fully explore the damage that standing for too long may do to our feet.”