Bringing domestic abuse out of the shadows, and how employers can make a difference 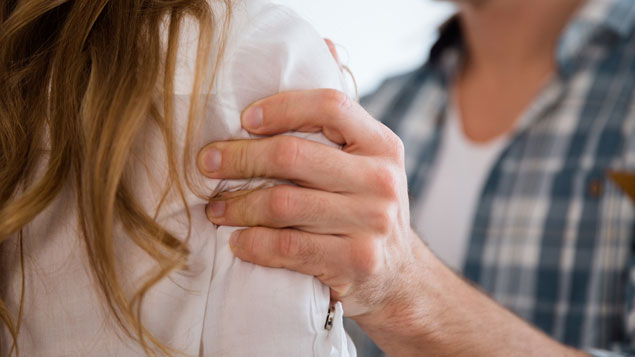 Domestic abuse is nothing to do with employers or the workplace, right? Wrong. Some three-quarters of people who endure domestic violence are also targeted at work, and an abusive home environment can have a serious knock-on effect on health, work and performance. While it can be a difficult and sensitive area for employers, a new toolkit and the example of pioneering employers can all help, as Nic Paton heard at the Health and Wellbeing at Work show earlier this year.

Probably for most of us, the news in June that Sally Challen will not have to go through a retrial of her 2011 conviction for murdering her abusive husband was only right and fair. It was a recognition that, while she self-evidently committed a very serious crime, the level of abuse she had suffered over many years gave grounds for diminished responsibility.

The Challen case has helped to bring the emotional and challenging issue of domestic abuse firmly into the public spotlight. It has also been highlighted by recent research suggesting that women who experience domestic abuse are three times more likely to develop a serious mental illness.

Equally, despite so much of our political bandwidth being taken up by Brexit, domestic abuse is a laudably ongoing focus for the government, with a new package of support measures for victims of domestic abuse being unveiled in May and a new Domestic Abuse Bill working its way through Parliament.

But what has any of this to do with the workplace and employers? Domestic abuse, surely, by its very name is a domestic issue, something that happens outside of the working environment?

It was precisely to challenge this misconception that three linked presentations on domestic abuse were held at the Health and Wellbeing at Work conference and exhibition in March.

And it was very timely because, as the first speaker Elizabeth Filkin, chair of the Employers’ Initiative on Domestic Abuse revealed, that very day telecoms giant Vodafone had announced it was to offer all staff who experience domestic abuse 10 days’ additional paid “safe leave”. The leave is designed to give victims of abuse the time and space to sort out things such as housing, schooling, counselling, appointments with the police, court appearances, with Vodafone being the first major British company to offer this benefit, she said.

Filkin’s presentation was focused on making the case for why, in fact, domestic abuse is an issue for employers and why, in turn, employers could find it valuable to become involved in The Employers’ Initiative on Domestic Abuse.

Filkin highlighted, first, how it is estimated one in four women has been or is subject to domestic abuse in Britain along with one in six men. But those were only the figures reported to the National Crime Agency, so were probably understating the true scale of the problem. “We have got a national epidemic, and we need your help to deal with it,” she said.

As well as the tragic individual cost, the cost to the State – police, social services and the NHS – was heavy, she pointed out. But, crucially from the workplace perspective, when an employee is experiencing domestic abuse it can cause depression and anxiety, so having a knock-on effect on productivity and performance, and even lead to the abused employee leaving the organisation.

“So there is a good bottom-line reason for doing something about domestic abuse as an employer. A third of victims report detriment to their working life – lateness, keeping jobs, loss of promotion,” she said. “Another statistic for employers – 75% of people enduring violence at home are targeted at work, by phone calls, detrimental information being given to managers and, indeed, by stalking. So there is a whole other area that employers need to focus on.”

The Employers’ Initiative on Domestic Abuse is a network of companies – some 250 at the moment – who come together regularly for meetings and share advice and knowledge and attend a national conference to share good practice.

It is free to join and offers access to online tools as well as support and information app called Bright Sky. Being a member of the network is also a clear public signal to employees and others that, as an employer, you will do your best to support employees and managers on this issue.

“We find that when employers get involved the ‘wall of silence’ is broken. We even have one member now where a director disclosed and put her name to her disclosure that she had been abused. They had quite a large number of disclosures during the first week after she had disclosed and people said ‘well if a director can say that happened to them, so can I,” Filkin said.

The second speaker was Louise Aston, wellbeing director at Business in the Community, who highlighted its new domestic abuse toolkit, which has been developed with Public Health England.

“This topic is seriously in the foothills. I would say it was where mental health was maybe 20 years ago. We tackled suicide a couple of years ago and that was, again, one of the last taboos. And there are lots of similarities that are faced with tackling suicide that we tackled with developing this particular toolkit,” she highlighted.

The toolkit is one of a suite of eight being developed by BITC and PHE and where the common strand running through is mental health. “If you are suffering from domestic abuse you might be feeling suicidal. You might have sleep deprivation. All of these issues are all linked together. So I would really urge you not to introduce domestic abuse as a standalone issue in your organisation, because I think it is harder to introduce it that way. It is easier to see it as a continuum of that whole-person approach,” Ashton emphasised.

BITC’s own research had suggested that 86% of HR leaders agreed employers have a duty of care to support employees on the issue of domestic abuse. Yet only 5% have any specific policies or processes or guidelines in place. Similarly, less than 1% of employees over the last 12 months had felt able to disclose abuse, and three-quarters of people targeted by abusers are targeted at work.

So, what is in the toolkit?

The toolkit covers a range of areas, including understanding the issue and “myth busting” – for example, highlighting that men can be victims of domestic abuse and that perpetrators can be treated and supported so as to change their abusive behaviour.

The toolkit also covers the legal context, including the fact that domestic abuse is a crime and needs to be part of your “duty of care” as an employer. Then there are practical tips and advice around how to make the commitment as an employer, day-to-day training and support, and a range of best practice case studies and resources.

Finally, BITC also ran workshops around the toolkit, Ashton pointed out. “I think the most important thing about this toolkit is it’s about fuelling the debate, having the discussion about domestic abuse.

“It is the first of its kind; it is robust, it is evidence based and it is backed by a panel of experts from the most prominent organisations working in this space. Don’t think of domestic abuse as being in isolation. We have a collective responsibility and, frankly, this is about saving lives.”

The final speaker in Birmingham was Lorraine Sears, health and safety consultant at banking giant Santander UK, who talked delegates through her organisation’s experience of and approach to supporting its 20,000+ UK employees or “colleagues”.

She highlighted to laughter, “I will be taking back to Santander: ‘guess what Vodafone are doing?’.”

On a more serious note, like the other speakers she emphasised that employers cannot brush domestic abuse under the domestic carpet. “There are things that will go on at home that will impact people in the workplace. Actually, there is not a lot that you can say isn’t work-related when you’ve got things going on behind closed doors that might affect you when you go to work,” she said.

The health and safety team, she estimated, receives on average around two to three calls a month from concerned managers and colleagues, with occasionally an employee feeling brave or empowered enough to report abuse themselves. It is important to recognise the ripple effect this can cause, especially among colleagues and friends, she advised.

“This could be someone they have sat next to, worked alongside, for years and they may not have ever realised anything was wrong. When they hear what a colleague has gone through, it can be quite emotional for them as well. ‘Why didn’t I understand, why didn’t I realise? I should have known, I should have picked up on it’. So we make sure we provide emotional support for everybody who needs it, and we do that through our Employee Assistance Programme, which provides face-to-face and telephone counselling 24/7,” said Sears.

As well as the EAP, another level of support is provided through the Bank Workers’ Charity benevolent fund, which can provide financial assistance to someone in an abuse crisis. Both can also signpost victims and managers to specialist support agencies such as Refuge and The ManKind Initiative.

The group has in place written and well-communicated domestic abuse guidelines. “We also have a personal safety protocol, which is put in place by our security teams. There is a red line to the police. If somebody is in imminent danger, if they feel going home that evening they don’t know what to face, we can implement the protocol so they can have a direct line to the police. But they must be happy to involve the police in order for that protocol to take place,” said Sears.

On top of this, support is provided through the health, safety and wellbeing team and the group’s occupational health consultant as well as through its network of regional consultants up and down the country.

Part of it, too, is simply about education, Sears emphasised. “We tell our people about the kind of behaviours they can look for. Of the cases we’ve had, stranding is one of the most horrendous ones. People being driven out in the middle of the night in their pyjamas and left in a remote location; no phone, no money, nothing.

“They find their way home and they have to get to work the next morning for 9am; to take a call like that, to listen to that, is one of the hardest things you can do,” she said.

Lorraine also outlined some important dos and don’ts for employers and occupational health practitioners to take on board.