Employers must have a plan to manage trauma in the workplace 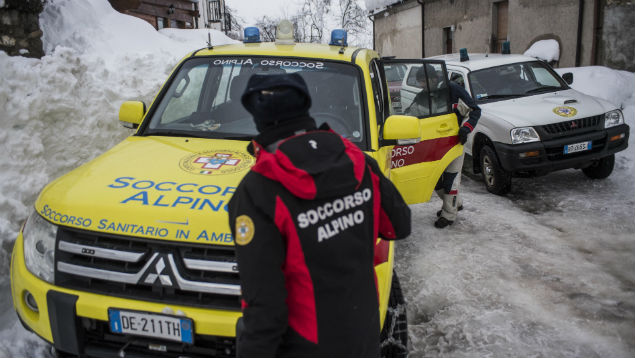 Employers should have a compassionate continuity plan to support staff after disasters like the avalanche in Abruzzo, Italy, in January. Alessandro Serano/REX/Shutterstock

Deaths at work are decreasing, but employees more likely to be exposed to trauma in the workplace in other ways. Employers must put in place plans to show compassion in the aftermath of a human disaster, says Anne Payne at Validium.

While accidents and incidents in the workplace have diminished – with just 144 workplace-related deaths in 2015-16, according to the Health and Safety Executive – the risk of workers being exposed to a sudden death or violence has risen.

If staff travel abroad, they can get caught up in international disasters, ranging from earthquakes to terrorist attacks. And back home, homicides, sexual offences and violent crime have gone up, according to the Office for National Statistics. Add to that increasingly aggressive and threatening behaviour from customers, and the risk of workers being exposed to a traumatic event has never been greater.

In response, a growing number of organisations are updating their disaster recovery plans to include specific strategies for helping employees exposed to sudden death or trauma to recover.

Unlike traditional business continuity plans, a compassionate continuity plan (CCP) recognises that if a large number of people are affected by trauma, such as a suicide or an armed raid, this can affect employees so much that it starts to have an impact on the business. So, as well as considering where best to locate back-up buildings and servers, a continuity plan also needs to prepare for how best to support staff.

The benefits of this are two-fold. First, businesses need people to operate. The sooner you can pick people back up and pay attention to their emotional and psychological needs, the less traumatised they will be and the sooner they will feel able to work again.

Second, you only need to look at the Malaysian Airlines decision in 2014 to text families that no one aboard flight MH370 had survived to see just how quickly a human tragedy can turn into a public relations disaster. With social media ready to jump on any misstep, you’ve only got one chance to get it right.

Critical to providing the right response is upfront planning, so that business leaders find themselves responsible for putting a properly thought through plan into action, rather than having to come up with one while in a state of bereavement or crisis.

The overriding objective of any CCP must be to minimise the emotional pain of those affected by showing compassion. Although traumatic events are by their very nature unexpected, there’s still much that can be done to prepare.

A useful first step is to look at the existing disaster recovery plans and ask if your loved ones would think this was good enough. Anyone who cares for you will want to know that you’ll be okay and looked after. If the plan only looks at ways of relocating vital business services, with no mention of how to reassure or look after its people, your family wouldn’t be happy, and neither should you be.

In that case, you need to bring together HR, OH, security, communications and any third-party suppliers responsible for returning people to work or their wellbeing. Then ask them: “What do we want people to be saying about our handing of a human disaster or potentially traumatic event?”

Although you can never predict exactly how people will feel after being exposed to something traumatic, we know that those affected are likely to want to make contact with their family, have lots of questions and want to move away from where the incident happened.

of who should be responsible for liaising with emergency services, next of kin and the media – but also how best to meet these fundamental people needs.

If you want staff to feel safe again, you might need to have plans in place to access enough transportation to take everyone home. If you want them to feel like the company isn’t trying to hide or withhold information, you need a process for regular, open communication and updates, instead of leaving people to hear things via social media.

In the event that someone within the organisation commits suicide, there might be lots of questions, such as: “Could I have done something to prevent this?”, or “Why didn’t they turn to me?”

It’s therefore useful to prepare for this in advance, so that should such an event happen, you can let people know that this response is normal, and that although uncomfortable to ponder, these thoughts will naturally preoccupy their minds for a while.

By letting employees know these feelings are normal, they won’t be so afraid of all the questions racing through their heads and will feel more able to discuss it.

If they don’t feel able to talk to people at the organisation about what has happened, it is important to encourage them to call the employee assistance programme, a charity helpline or speak to someone they trust outside of the organisation, especially if they’ve experienced this issue before.

Managers and business leaders also need to be prepared to handle questions from employees and know in advance how to deal with issues ranging from how best to represent the company at a funeral, to how to deal with a desk that’s been turned into a shrine.

Essential to minimising further emotional distress, and showing the caring side of the organisation, is assessing the psychological impact and responding in a compassionate way.

Anne Payne is co-founder of Validium, an independent provider of trauma, EAP and psychological rehabilitation services.