By Ashleigh Webber on 26 Jun 2018 in Cancer, Health and safety, Occupational Health 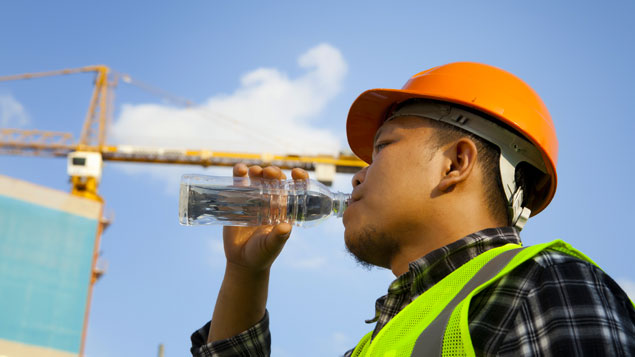 Employers should ensure staff who work outside are protected from the sun and heat, as temperatures are set to reach 30 degrees this week.

The TUC, which issued the reminder, urged employers to work with health and safety union reps to make sure workers are protected against risks including sunburn, dehydration and sunstroke on warm days. Those who spend extended periods of time working outdoors, such as builders or agricultural workers, were particularly at risk.

Is there a maximum workplace temperature beyond which employees cannot be expected to work?

Warm weather can also be dangerous for those whose jobs involve driving, the TUC claimed. It said company vehicles should have air conditioning, and driving in hot weather should be avoided if the driver is going to be stuck in traffic for any length of time.

TUC general secretary Frances O’Grady said: “We all love to see the sunshine. But working outdoors in sweltering conditions can be unbearable and dangerous.

“Bosses must ensure their staff are protected with regular breaks, lots of fluids, plenty of sunscreen and the right protective clothing.”

A recent study by Soleve Sunburn Relief found that almost a third of people did not wear any kind of sunscreen, with 23% believing that the sun is “not strong enough” in the UK to do any damage.

Its survey of 2,000 people found that 43% experienced sunburn at least once over the summer, with 31% experiencing it at least two or three times.

Noel Wicks, pharmacist and director of Right Medicine Pharmacy, said it was worrying that people assumed that the effects from the sun in the UK were “weaker” than abroad.

“Sunburn is not a badge of honour and should not be taken lightly as there can be serious health repercussions such as sun stroke and even skin cancer,” he said.