Only minority of employers tackling presenteeism, warns CIPD, despite tripling of cases 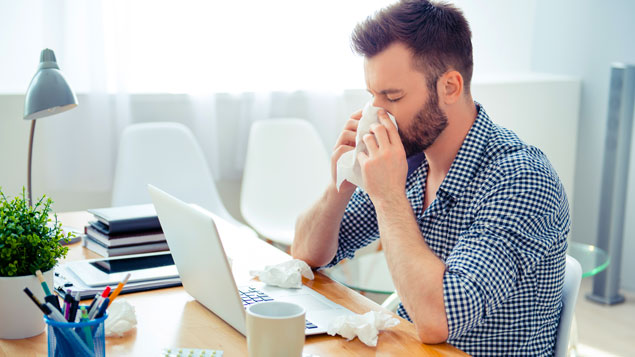 “Presenteeism” has more than tripled since 2010, hitting what is believed to be a record high, yet only a minority of organisations have taken steps to challenge unhealthy working practices, the Chartered Institute of Personnel and Development has warned.

Eight in 10 (86%) employers said they had observed staff coming into work while they had been unwell over the last 12 months, according to the CIPD’s annual snapshot of health and wellbeing in the workplace, published in conjunction with insurer Simplyhealth. This compared with 72% in 2016 and 26% in 2010.

The Health and Wellbeing at Work report found that just a quarter of organisations that had experienced “presenteeism” had taken steps to tackle it, compared with 48% in 2016.

The survey of 1,000 organisations also discovered employees were increasingly working while on annual leave. More than two-thirds (69%) of employers said they had seen “leaveism” in their organisation within the last year, but only 27% had taken action to reduce it.

The report highlighted that presenteeism and leaveism could be associated with mental health conditions and stress-related absence, which could in turn lead to an increase in employees taking long-term sick leave. It said employees were now on average taking 6.6 days off because of illness per year, up slightly from 6.3 days last year.

Rachel Suff, senior employment relations adviser at the CIPD, said that the report “shines a light on the shocking scale of presenteeism and leaveism… as people feel under even more pressure at work.”

She added: “In order to encourage a healthy workplace, organisations need to look beyond sickness absence rates alone and develop a solid, evidence-based understanding of the underlying causes of work-related stress and unhealthy behaviour like presenteeism. Without this evidence base, efforts to support employees and improve their health and well-being will be short-lived.”

The report argued that employee wellbeing appeared to be a low priority for many organisations, especially among senior managers. Only around half of employers said it was on senior leaders’ and line managers’ agendas.

More than a fifth (22%) said mental ill health was the primary cause of long-term absence, compared with 13% in 2016, and 55% said they had seen an increase in mental health conditions among employees in the last 12 months.

The report argued: “It’s clear we have some way to go before the majority of workplaces achieve parity of esteem in the attention that good mental health receives compared with physical health, and the confidence and openness with which this aspect of health is treated.

“It’s also crucial that employers promote an open and inclusive culture so that employees feel confident about discussing a mental health issue and discussing the challenges they are experiencing.”

Almost one in five (18%) employers were not doing anything to improve employee health and wellbeing, compared with 8% in 2016.

Among those that had wellbeing schemes in place, the report found that the health of their staff was not the scheme’s main objective for most organisations – they wanted to show they were a competitive employer.

Budget constraints also meant that many employers had invested in wide-reaching wellbeing schemes rather than those that met individual health needs.

“Put simply, a reactive, ad hoc approach to wellbeing is not enough. If employers want to build a workforce that is happy, healthy and productive, the wellbeing agenda needs to be a priority and employee wellbeing practices must be integrated in the organisation’s day-to-day operations,” Suff said.