The number of UK doctors considering leaving the NHS early has more than doubled in 10 months, according to practitioner research by the British Medical Association.

Nearly a third of doctors (32%) are considering early retirement as many continue to deal with the stress and burnout caused by the demands of the pandemic. A similar survey by the BMA in June 2020 found that 14% contemplating early retirement.

While half of respondents in the BMA’s latest tracker survey said they plan to work fewer hours, 25% said they are ‘more likely’ to take a career break, with a further 21% considering leaving the NHS altogether for another career. 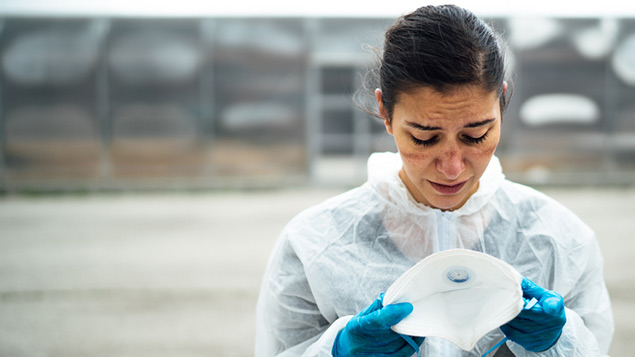 18 May 2021 2:00pm. In this CPD webinar for OHW+, Noreen Tehrani examines psychological surveillance in organisations in the wake of the coronavirus pandemic.

Asked why, many doctors cited workload, including the inability to take breaks or leave. Almost 40% of respondents said they do not have a place at work where they can safely relax with colleagues.

Dr Chaand Nagpaul, BMA council chair, said: “It’s deeply worrying that more and more doctors are considering leaving the NHS because of the pressures of the pandemic – talented, experienced professionals who the NHS needs more than ever to pull this country out of a once-in-a-generation health crisis.

“Doctors and other healthcare workers have told us they need space and time to rest and recuperate – especially as we look ahead to tackling the frightening backlog of care of millions of patients.”

The findings, the latest in a series of similar BMA’s tracker surveys during the pandemic, provide evidence underpinning the doctors’ union’s calls for staff to be given time and resources to rest.

“Far too many doctors and healthcare workers are being denied even a space to unwind in at work,” explained Nagpaul, “never mind a proper break and time to recuperate. This is leading to a detrimental impact on doctors’ health and wellbeing and forcing them to feel as though they have no choice but to abandon a profession they love and worked so hard to achieve.

If things don’t change in the next few weeks, I do worry that many colleagues will leave the profession, not because they have failed, but the government and the system failed them” – GP, Yorkshire

“For those that stay, working without respite endangers patient care from doctors becoming exhausted and burnt out – we’ve already seen an increase in staff taking sick leave, further draining the NHS of its precious workforce.”

The BMA found that more than half of doctors are “afraid” of an unmanageable workload to deal with the backlog of millions of patients waiting for treatment and most do not feel that their hospital or department will be able to cope with demand. Three in five doctors are worried about the backlog’s impact on patient care.

One acute speciality doctor told the BMA: “A ‘break’ on shift means I try to grab 10 minutes in my office to down a cup of tea and catch up on some of the hundreds of emails I need to read before inevitably being called back out. My usual finish time on these shifts is around two hours after I’m rostered to leave. I spend my rest days catching up on the rest of the emails I don’t have time to deal with at work. It’s exhausting.

“I’ve started exploring career opportunities outside of the NHS. I don’t know yet if I’ll leave clinical medicine, but I’m seriously considering it. If the right opportunity presents itself I’ll go for it.”

A GP, from Yorkshire, said: “Like most, I’ve had days where I wanted to stop. I’ve had colleagues in tears – some scared of what is happening around us and some completely overwhelmed with the avalanche of work that has hit general practice. If things don’t change in the next few weeks, I do worry that many colleagues will leave the profession, not because they have failed, but the government and the system failed them.”

A spokesperson for the Department of Health and Social Care said: “There are record numbers of doctors, nurses and NHS staff [in England] – over 1.18 million – and there are now more medical students in training than at any point in NHS history.

“We are backing our NHS with an extra £7bn for health and care services this year, bringing our total additional Covid-19 investment to £92bn, including £1bn to support NHS recovery by tackling waiting lists.”

Record ethnic diversity in NHS, but barriers to...

No ‘serious effort’ to fix staff shortages in...