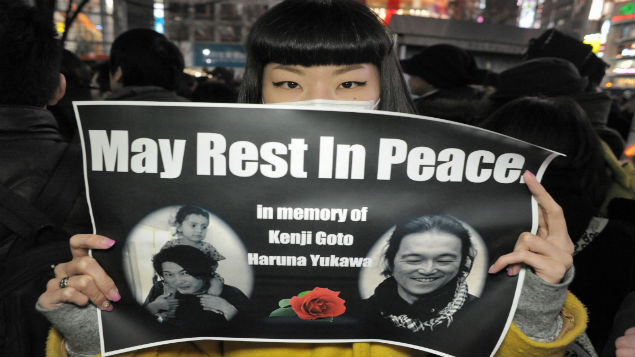 A vigil for Japanese journalist Kenji Goto, murdered in January 2015 while reporting on the Syrian conflict is one of 1480 journalists killed globally in the last 10 years

This month’s round-up of recently published occupational health research looks at the risks run by journalists in their working life, the complexity of assessing whether stress is work-related and other topics.

Journalism “more dangerous than ever”

Journalism has never been more dangerous and journalists say that they have never felt so unsafe doing their jobs. Globally, 1,480 journalists and media workers have died doing their jobs over the past 10 years. This is the stark conclusion of a report into the changing state of media safety, based on a survey of individuals and analysis of incidents around the world. Local journalists working in conflict zones are particularly at risk, the report finds. Some media organisations have stepped up the personal protection provided to foreign correspondents by providing more and better training and equipment, but often freelancers and local journalists are excluded from these measures. While technology is helping journalists deliver their message, it can also make them vulnerable to those entities, including terrorist groups, that are intent on tracking them down and causing harm.

Attributing an employee’s mental ill health to work is complex and needs to take into account workplace
stressors and factors related to an individual’s vulnerability, according to a Delphi study. The researchers invited academics, OH physicians, psychiatrists and psychologists to reach a consensus around a set of workplace and personal factors associated with stress, deeming that agreement was reached when 66% or more of the experts concurred on a particular factor. Consensus was reached on 11 workplace stressors, including the well-recognised high job strain and effort/reward imbalance, but also for organisational injustice, work scheduling and threats to job security. Seven personal factors were identified as important in attributing mental ill health, including: previous mental illness; personality traits of neuroticism; and adverse life events. The study concludes that “clinical consultation with an occupational physician who is familiar with the workplace is central to the process”.

Deficiencies in accident and disease prevention can have significant consequences for individual assignees and the employing organisation, making it vital to implement an effective travel risk-management system when posting employees overseas, a report concludes. It is the employer’s responsibility to reduce any risks associated with international work. The organisation must prepare and educate assignees on conditions in the field, enforce preventive measures before departure (including immunisation) and establish practices to be followed during a posting. For example, by detailing malaria prophylaxis, antivector protection, road safety, water and food precautions, safe sex and stress management. The report contains a case study of a medical check programme, demonstrating that it produced a return on investment of between $1.6 and $2.53 for every dollar invested.

A night of only partial sleep increases the physiological and psychological strain associated with working in the heat, according to a small-scale study of 14 healthy Japanese employees. Taking a nap during the day seemed to be effective in reducing the pressure associated with working in the heat (simulated by two 40-minute periods of moderate walking in a hot room in the morning and the afternoon) after only four hours’ sleep. Napping also inhibited the fall in vigilance associated with partial sleep (measured by reaction times and lapses in psychomotor vigilance tasks).

Asthma symptoms and use of cleaning products

The use of specific cleaning products at work, mainly irritants and sprays, may exacerbate asthma, according to an evaluation of the short-term effects of exposure to cleaning products on lung function and respiratory symptoms among a group of female cleaners. Participants in the  study reported using an average of 2.4 products a day, with exposure to at least one strong irritant occurring on 56% of person-days [a unit of measurement based on an ideal amount of work done by a person in one working day].

Line managers play a key role in supporting employees back to work but can struggle to balance the needs of the returning worker with those of the team, according to a study of Danish hospital managers. The study, based on qualitative interviews and focus groups, identified four themes in managers’ experiences of rehabilitation: “coordinator and collaborator”; “dilemmas of the return-to-work enforcer”; “the right to be sick and absent”; and “keep the machinery running”.

Martin A et al. “Impact of changes in mode of travel to work on changes in body mass index: evidence from the British Household Panel Survey”. Journal of Epidemiology & Community Health, first published online 7 May 2015.