By Personnel Today on 5 Apr 2013 in Research, Health and safety, Occupational Health, Wellbeing 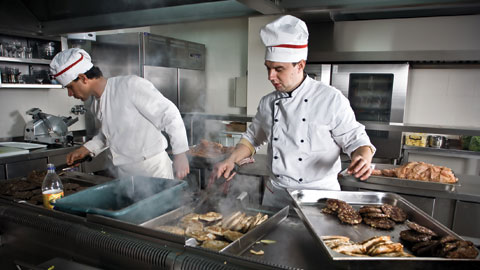 Restaurant workers have higher rates of problem drinking than many other occupational groups, according to a study that explored the environmental risks and work characteristics that may contribute to drinking issues. It found that the multiple, complex social networks at play in the sector have unique risk characteristics.

Finding what motivates the older workforce

People managers and OH professionals should consider the subjective health of older workers when managing their occupational wellbeing, according to a study of how employees’ attitudes to work change with age. Using evidence from Dutch healthcare and university employees, the researchers examined whether or not employees’ perceptions of their remaining time to live – the “future time perspective”- affected their motivation. It concluded that a good subjective general health and an open-ended future time perspective is associated with work-related growth, esteem and security at work.

A study of Greek bus workers found a significant increase in mortality from all causes, and from heart disease in particular, among 4,400 male bus workers following the privatisation and subsequent closure of their employer. The authors concluded: “These results may signal future mortality patterns in Greece if the current climate of austerity and recession continues.”

Biopsychosocial factors and returning to work

An employee’s return to work after trauma is affected by a range of non-health factors, a study of people recovering from occupational hand injury suggests. During the acute stages of recovery, the severity of the injury, the pain it causes and whether or not the employee lives alone are the most important predictors of a delayed return to work. However, four weeks after the injury, other biopsychosocial factors kick in, such as the locus of control and negative affect. The authors found that injury severity and the attribution of blame for the accident are not the most important determinants of the outcome.

Almost two-thirds of all cancer deaths occur in low- and middle-income countries and a substantial proportion are attributable to carcinogenic exposures at work, according to a meta-analysis. The authors concluded that opportunities existed to revitalise global cancer control policies by developing primary interventions targeting these occupational causes.

Including spouses and the children of employees in an employer’s wellness programme is likely to significantly increase its impact, according to a case study of one US intervention. The researchers studied the programme over its first year of operation and concluded that, although it is too early to perform an accurate return-on-investment study on the wellness initiative, “nonetheless, we believe the inclusion of spouses in well-ness programs merits serious consideration by employers”. Improving the health behaviours of family members can provide additional motivation and support for employees to make changes to their lifestyle outside work, as “in many families, the spouse may have the greatest impact on lifestyle factors”, the case study concluded.

Health promotion is worth the cost of the programme

A low-cost, team-based, peer-led wellbeing programme can cut ill health and injury, according to a study of US firefighters. The researchers collected data from Oregon firefighters who participated in a 12-session “Promoting healthy lifestyles: Alternative models’ effects (PHLAME)” programme, and compared information on their medical and other health-related claims with those for employees of fire departments not taking part in PHLAME. Fire departments taking part in the programme were able to demonstrate a positive return on investment of up to 400%.

An airport worker who suffered a broken back after a colleague, who had been working 17-hour days for the past 11 days, lost control of a motorised vehicle at Stansted Airport has received compensation. The buggy hit Mick Draper, the employee, in the elbow, throwing him several feet onto a nearby luggage chute, where he landed heavily, breaking three bones in his back. Mr Draper attempted to continue working for several weeks after the accident, but woke up one morning unable to move. Initially, he was referred for physiotherapy before a specialist diagnosed a broken back. He is now disabled. Anna Barnett from Thompsons Solicitors said: “A culture of excessive hours created a trap for this [Unite] member and his colleagues. The fact that he had raised his concerns to bosses and they ignored him compounds his employer’s disregard for the health and safety of its workforce”.

An architectural firm has been fined £5,400 and £2,917 in costs for potentially exposing builders to asbestos fibres during construction work at a Mid-Wales rugby club. The firm failed to pass on information about the presence of asbestos in insulation boards to the builders before they removed soffits from an end wall at the Aberystwyth Rugby Club in 2012. The situation came to light during a routine inspection of the work by a Health and Safety Executive (HSE) inspector, who found remains of damaged asbestos boards on the gable end of the building. The HSE inspector said: “Dilyn Roberts Penseiri/Architects Ltd failed to pass on vital survey information, resulting in a construction worker being exposed to asbestos.”