Police complain about accommodation ahead of Trump visit

By Ashleigh Webber on 12 Jul 2018 in Health and safety, Latest News, Grievance 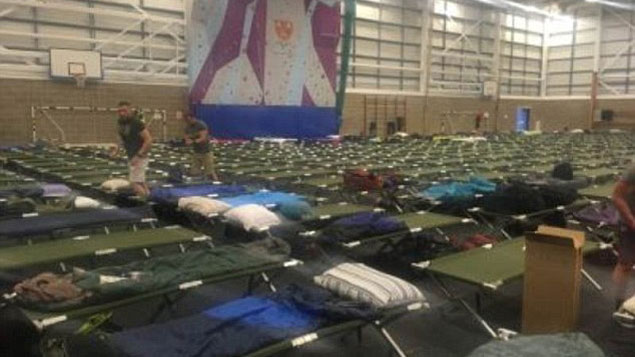 Police officers brought in to ensure US president Donald Trump’s visit to the UK runs smoothly have complained about the overcrowded accommodation they have been given.

Hampshire Police Federation chair John Apter (@Hantsfedchair) posted several images on Twitter, which appear to show camp beds and mats set out on the floor of a sports hall.

He Tweeted: “Prisoners arrested last night will have had better accommodation than those police officers ensuring the presidential visit runs smoothly.

“Police chiefs who talk wellbeing of their people need to take a long hard look at this. This is not acceptable.”

The Daily Mail reported that around 300 police officers are expected to stay in the gym, the location of which has not been revealed, with some complaining of freezing cold showers. One officer also claimed they had not been able to charge their mobile phones.

Another officer posted on Twitter: “After one hour’s sleep, a freezing cold shower and having to get dressed in the dark with no light there are serious issues with health and safety arising in my accomodation.

“People are saying they feel unwell. Myself included.”

A spokesman for the National Police Chiefs Council, which represents police forces nationwide, said: “Some of the accommodation pictured today for officers supporting the major operation for the US Presidential visit is not acceptable and below the standard of other accommodation for this operation.

“Essex Police is working at speed to resolve the issues for the affected officers. Thank you to the officers who have raised this important issue”.

Almost every police force across in England and Wales has provided officers to stop planned rallies and marches in protest against the president’s visit from turning violent. A ‘Stop Trump’ march is expected to take place in London tomorrow.