By Adam McCulloch on 12 Jul 2019 in Zero hours, Health and safety, Latest News 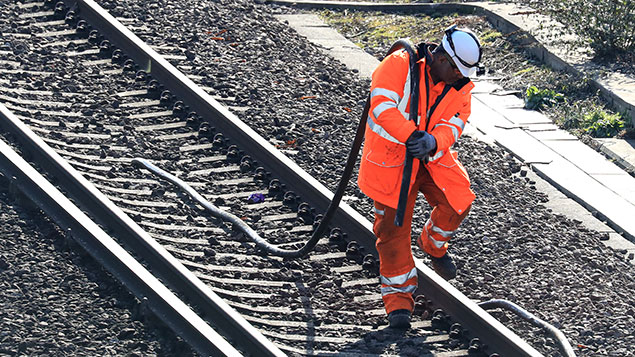 The RMT rail union, the TUC and the Labour party are calling for a ban on zero-hours contract workers on UK railways after investigators found fatigue was a contributory factor in a fatal accident last year.

A Rail Accident Investigation Branch (RAIB) report into the death of a worker last November near Purley in Surrey found that the unnamed man, a 37-year-old from Upminster, Essex, had been fatigued after little sleep between night shifts, and did not realise the passenger train was on the track directly behind him when he heard its approach and horn.

According to the Guardian, the man was on the track alone because he was covering up for his brother, who himself was too tired to do the night shift after daytime delivery work.

Investigators found that the incident might have resulted in two fatalities instead of one had the brother also been at work.

The man’s brother had worked 17 hours as a delivery driver on the weekend before the Monday night rail shift and was scheduled to work another 60 hours during the week.

Vital Human Resources, which had engaged the brothers on zero-hours contracts work, said the practice of ghosting, where workers fake attendance, was not common, though this was not borne out by witnesses who told investigators it was a regular occurrence.

The report said that Vital had “not sufficiently identified and addressed the risk of fatigue among zero-hours contracted staff”, nor “identified or prevented staff absenting themselves from work without being detected”.

The RAIB’s report criticised “Victorian” methods of protection and the fatigue among zero-hours contract staff. RMT general secretary Mick Cash said: “This latest shocking report should force real change across the industry and it should force it right now.

“Warning after warning from this trade union on fatigue, zero hours and casualisation has not being properly addressed by Network Rail or the safety regulator the Office of Rail & Road [ORR].”

The RAIB does not have the remit to change practices itself but recommends changes to ORR. These advised that Network Rail should improve “the way its labour suppliers manage the risks associated with the use of workers on zero hours contracts” and for Vital Human Resources to commission an independent review of its actions following the Purley tragedy to reduce the risk of fatigue.

Chief inspector of rail accidents Simon French said: “When workers are employed on a casual basis on zero hours contracts, there can be great pressure for them to try and juggle multiple jobs to make ends meet. The possible effects of such patterns of employment on fatigue and fitness for work are significant. We are therefore recommending that the railway industry reviews the way it manages the use of staff on zero hours contracts, to minimise the risk associated with this pattern of work.”

The shadow transport secretary, Andy McDonald, and TUC general secretary Frances O’Grady  called for a ban on zero-hours contracts. McDonald said: “The tragic incident at Purley is a reminder of the human cost of zero-hours contracts and the impact multiple jobs has on worker fatigue. It’s clear that the circumstances which led to this incident should never have been allowed to happen.”

This is not only a terrible tragedy, it is also an utter and total scandal. How could it ever have been thought acceptable to have a worker on a zero hours contract go to work in such a highly dangerous environment on his own? I will be pursuing this. https://t.co/psLhisudEV

O’Grady added: “Network Rail have been warned by unions about these dangers, but have not acted.”

Network Rail said it had a code of conduct for its labour suppliers who use zero-hour contracts to ensure contractor safety. It added it was reviewing its standards and supplier practices to ensure they were focused on contractor safety. Shortly before the report, it announced the launch of a £70m safety task force for track worker safety.

A spokesperson for Vital Human Resources said: “The health and safety of our workforce is our main priority and a core value within our business.”