By Nic Paton on 30 Nov 2017 in Research, Occupational Health 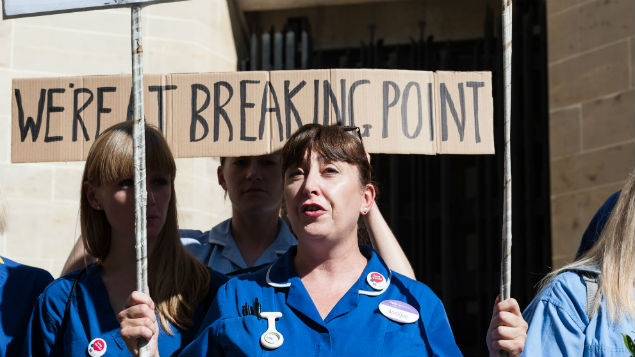 Nurses gather outside the Department of Health on the NHS's 69th birthday to protest against the pay restraint. Nurse numbers are now worryingly low. PHoto: Wiktor Syxmanowicz/Shutterstock

Three high-level reports have identified a worrying decline in NHS nurse numbers, with fewer coming to the UK from abroad, especially from within the EU, and fewer students coming into the profession.

Although the trend is unlikely to have an immediate effect on OH nursing, the profession is already a small and ageing specialty and therefore any tightening or worsening of workforce pressures could, in time, have a significant knock-on effect. Fewer nurses also means intensifying pressures for those remaining in the profession, in turn potentially creating a vicious cycle of stress, pressure and health problems.

A report by the Health Foundation has argued that, although the NHS workforce as a whole increased by 2% in the year to April, nurse numbers decreased by 0.2%. Worryingly, 1,220 fewer students started undergraduate nursing degrees in England in 2017, it said.

A new analysis by The King’s Fund has echoed these findings, arguing that the number of nurses and health visitors employed by the NHS has fallen for the first time on a year-on-year basis since April 2013.

The key factor in this decline was a significant reduction in the number of nurses from the EU joining the UK nursing register since the referendum and changes to language testing requirements, together with an increasing number of EU staff leaving the NHS, said the King’s Fund.

Finally, a report from the Nursing & Midwifery Council has calculated that, over the past 12 months, the number of UK graduates leaving the profession has increased by 9%.

Compounding this, the number of nurses and midwives from Europe leaving the register has increased by 67%, while the number joining the register from the EU has dropped dramatically, from 10,178 last year to 1,107 this year, a decrease of 89%.

Health secretary Jeremy Hunt has announced an increase in nurse training places, but King’s Fund director Richard Murray warned this was unlikely to help in the short to medium term.

“It is worrying that the number of nurses and health visitors is going down at a time when services are already overstretched and the demand for care is rising. This means the NHS is less equipped to cope with the demands of a winter that was already threatening to stretch it to the limit,” he said.

The number of staff leaving the NHS as a result of ill-health and work-life balance issues had also increased sharply over the past few years, the King’s Fund said.

The rising pressures on nursing staff as a result have been highlighted by an analysis of Health and Safety Executive statistics. This has argued that nursing and midwifery, along with welfare and teaching, are now among the UK’s most stressful occupations.