Return to work of a security officer with plantar fasciitis 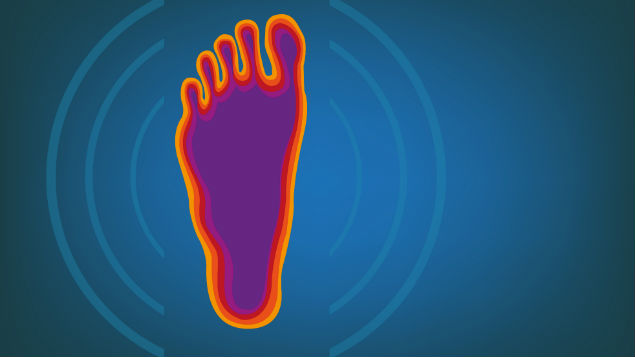 This case study examines the impact of plantar fasciitis on the ability of Brian, a 40-year-old security officer, to undertake his duties. Sarah Bryden-Bradley and Anne Harriss show how structured frameworks were used to assess and appreciate the impact of his condition on his physical and mental health, and his ability to get back to work.

First, the biopsychosocial model holistically considers the individual in the context of their health condition, social and psychological health as well as their work environment (Waddell & Burton, 2006).

The Murugiah et al (2002) framework for assessing fitness to work was employed considering personal and legal aspects in conjunction with characteristics of the work and working environment as the basis for decision making and providing recommendations.

Brian’s line manager requested a fitness-to-work assessment with advice for suitable adjustments to support and sustain a return to work. This followed two weeks of heel pain when undertaking patrolling duties and then one week of GP-certificated absence with a diagnosis of plantar fasciitis (PF).

US research indicates 10% of the population will seek treatment for heel pain at some point, of which 83% will be part of the working population (Beeson, 2014).

Individuals are less likely to return to work after only six weeks away (Waddell et al, 2008).

The employer supports early return in the context of wider workplace health and wellbeing. The nurse-led OH service encourages management referrals, employees can access physiotherapy services and enhanced sick pay while on recuperative duties, and a culture where OH advice on adjustment to support early return to work is actively solicited by line managers.

Brian’s fitness for role was evaluated using the Murugiah et al (2002) framework. The impact of his pain was considered in the context of personal aspects, work environment, work characteristics and the legal context of fitness for work.

Personal aspects were assessed via clinical observation using a structured assessment of his functional abilities. A comprehensive history was taken using a model described by Thornbory (2013) and the biopsychosocial framework (Waddell & Burton, 2004) informed the assessment from a holistic perspective. Potential obstacles to return were identified using the psychosocial flags framework (Kendall et al, 2009).

Brian described a three-week history of “stabbing pains … like hot pokers” in the sole of his right foot on waking. His stated inability to put the sole of his foot to the floor without pain was confirmed by observation. Functionally, he described difficulties walking any distance and an inability to run. Load bearing on his right foot was painful but he was able to drive.

The pain of PF is associated with walking/standing for long periods (Irving et al, 2006) and is usually more pronounced at the start of the day or after lengthy periods of standing or activity (Owens, 2010). Brian noted that his early-morning pain initially resolved with movement, returning after one to two hours and remaining present throughout the day, leaving him unable to walk any distance or stand without pain.

Any assessment of functional capacity should be undertaken in light of the unique characteristics of the job role and working environment. It requires detailed knowledge of the essential and desirable role requirements (Murugiah et al, 2002). Brian’s work characteristics were evaluated during the assessment, with reference to the job description provided by management and the OHN’s knowledge of his work environment and typical duties.

OH professionals must consider any company, statutory or regulatory guidance on fitness for work that may be in place when undertaking their assessment (Murugiah et al, 2002). Most pertinent to Brian’s role included the ability to stand for reasonable periods, run and walk reasonable distances.

Brian worked an average of 40 hours a week over a rotating shift pattern. On any particular shift, he spent two hours in the control room and the remaining time undertaking patrols lasting up to an hour, followed by a return to base.

Brian could be called upon to give chase and run or stand observing for long periods at any point in his patrol.

The causes of PF are not fully understood. However, the consensus view is that it is an overuse injury (National Institute for Health and Clinical Excellence, 2012) resulting in microscopic tears and inflammation to the plantar fascia (Irving et al, 2007).

The evidence base for inflammation as the sole causative mechanism for pain, although restricted, suggests it may be a contributory factor (Johnson et al, 2014). More recent literature meta-analysis suggests micro tears, tissue degeneration and thickening as more likely causes of pain than inflammatory processes alone (Beeson, 2014; and Thompson et al, 2014).

A number of contributory intrinsic and extrinsic factors have been linked to the development of plantar heel pain.

Recent evidence suggests that higher BMI, reduced flexibility between foot and shin, and muscle weakness are factors most likely to be associated with plantar heel pain. It is unclear whether they are causative or result from the condition itself (Sullivan et al, 2015).

Brian’s BMI was within the normal range, no relevant previous medical history was disclosed, and prior to this episode, he had no reported sickness absence in the previous two years. Before his symptoms started, Brian attended the gym frequently and described his pre-symptom lower limb flexibility and strength as good.

Brian reported visiting his GP shortly after the pain started and commented that the GP did not examine his foot and he was discharged with an advice leaflet. This may have led to a black flag event as Brian believed that his condition was not serious.

Following rest and analgesia, he restarted work and social activities once his pain subsided. This was despite increasing discomfort and an involuntary turning in of his foot when walking, leading to an exacerbation of his pain. At this point he returned to his GP, was signed off work and referred to OH by his manager. Recommencing activity may have caused re-traumatisation, resulting in symptom return. Advice was given on the regular use of non-steroidal, anti-inflammatory analgesia, including ibuprofen.

Brian had been in post for eight years and enjoyed his job working as part of a team of two. He had returned to full patrolling duties when his pain first subsided, not wishing to place any additional burden on his colleague.

Brian also highlighted his domestic circumstances; he lived locally with his wife and young daughter. He usually undertook a significant amount of household duties (shopping, cleaning, and cooking), as well as childcare when not at work.

He experienced pain and discomfort when undertaking these activities and indicated that his desire to continue with childcare and family activities conflicted with medical advice to rest his foot.

A referral to OH shortly after Brian’s symptoms began could have highlighted the blue flags identified, minimising his subsequent work absence. Had he been more aware of the importance of rest, appropriate analgesia and footwear/insoles with referral for physiotherapy (Thompson et al, 2014) once symptoms commenced, Brian could have been advised that the avoidance of weight-bearing activities was key to prompt resolution of his condition. This may have assisted with his management of social and domestic responsibilities, allowing his foot to rest.

An earlier assessment could have also provided management with the necessary information to manage workload and job roles and allay any concerns regarding Brian performing his duties.

It is important to undertake a comprehensive, holistic assessment to understand the full range of personal, psychological, social and other non-work-related factors effecting a timely recovery and return to work.

Brian was reassured that PF is generally self-limiting; the majority of cases resolve in a timely manner with conservative treatment (Jariwala et al, 2011). He was advised on factors believed to impact heel pain, including considering footwear with greater ankle and arch support, and orthotics (Thompson et al, 2014).

He was referred for a course of physiotherapy to develop muscular strength and improve flexibility, and was encouraged to undertake regular stretching, for example, the “ice roll”, where the plantar surface is rolled over an ice-filled, plastic water bottle (Thompson et al, 2014).

Prior to advising on fitness for work and planning for a return to the workplace, legal aspects must be considered, including the common law duty of employers to take reasonable care of their staff, employer liability, the provisions of health and safety at work, and equality legislation (Murugiah et al, 2002).

The assessment indicated Brian was not functionally unable to undertake many of his role requirements, including patrolling for up to an hour, incorporating running and standing for protracted periods. It became apparent that security duties in this working environment within a team of two, including solo patrols, put him at risk of harming his health, safety and wellbeing while the symptoms persisted.

Brian and his manager were advised that he was not currently fit for full security patrolling duties.

Brian was keen to return to work, believing that he was not truly “sick”. Negative perceptions on the part of an individual about getting back to work can have a significant impact on the likelihood of timely return (Giri et al, 2009).

It was important to maintain Brian’s positive attitude while considering the impact on the workplace and his colleagues, thus a return-to-work plan with a period of recuperative adjusted duties was formulated. The evidence for short-term adaptations facilitating an early return is strong, as is the data confirming the cost effectiveness of such approaches (Waddell et al, 2008).

Adjustments to support a prompt return to work

Recommendations for adjustments supporting Brian’s prompt return to work were based on knowledge of workplace and wellbeing support, assessment of functional capabilities, and national guidelines (Black, 2008). A return on full hours was recommended in conjunction with an evaluation of his work boots, ensuring they provided suitable arch and ankle support. Adjusted duties to avoid tasks requiring prolonged weight bearing, such as patrolling, were recommended.

Brian’s prognosis for a full recovery was stated as good with rehabilitation supported by physiotherapy referral. During a telephone review four weeks later, Brian reported wearing more supportive footwear with inserts and taking regular analgesia. His intrusive symptoms had subsided and he reported feeling more psychologically comfortable with resting in the domestic and social settings. He had discussed the rationale for this constructively with his wife, who had taken on more household duties.

Brian had undergone four sessions of physiotherapy and was undertaking the prescribed exercises in between sessions. He said his manager had been very supportive of the proposed return-to-work plan, accommodating a week of control-room duties, followed by two weeks of graded return to full patrol duties that he managed well. New patrol boots with supportive inserts were also on order.

Assessment of fitness to work requires the OH practitioner to have a range of knowledge and expertise incorporating a holistic appreciation of the client in the context of their life and work. An understanding of underlying pathology, disease aetiology and symptom presentation is critical and must be integrated with a detailed knowledge of the organisational purpose, roles, environment and culture. Finally, these insights must be synthesised with an in-depth awareness of the constantly evolving legal aspects of health and employment, supporting individualised recommendations promoting health and wellbeing within the business context.

Waddell G, Burton K, and Kendall NAS (2008). “Vocational rehabilitation: what works, for whom, and when?”. London: TSO.