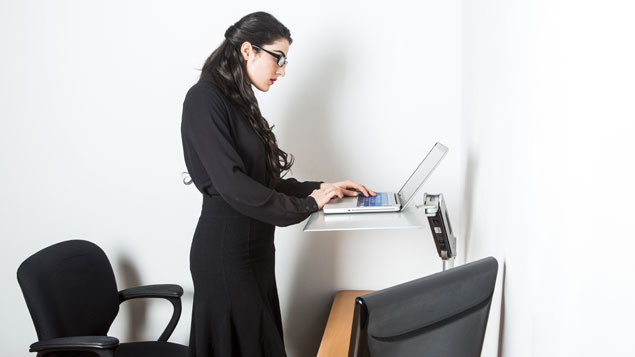 Office workers who are equipped with a sit-stand desk are more productive, healthier and happier than those who are not, a study has found.

Research from Loughborough University and the University of Leicester, published in the BMJ, found that giving height-adjustable workstations to staff, alongside various educational tools on the benefits of standing at work, resulted in employees feeling more productive and engaged and reduced levels of presenteeism, anxiety, fatigue and back pain.

The study saw 146 office workers from the University Hospitals of Leicester NHS Trust split into two groups: one received the Stand More at Work (SMArT Work) programme – which includes educational seminars and posters and a height-adjustable desk – while the second group were asked to continue as normal. Both were asked to wear a monitor on their thigh.

Sitting time was measured every three, six and 12 months and gradually widened between the two groups. After 12 months, the SMArT Work group spent 83 minutes less time sitting than the second group.

However, at the end of the study, the SMArT Work participants were still sitting for six to eight hours every day, which the authors said still puts them at risk of cardiovascular disease mortality. Before the study, they spent 9.7 hours a day sitting, on average.

Dr Charlotte Edwardson, associate professor from the University of Leicester, said: “Those who received the SMArT Work programme reported improvements in their work performance, work dedication and engagement, quality of life and reduced levels of sickness presenteeism, feelings of fatigue and musculoskeletal issues, such as lower back pain.

“Presenteeism, together with absenteeism, is estimated to cost UK employers more than £30 billion annually. Approximately nine million working days are lost to musculoskeletal problems. So, the SMArT Work programme could help employers make headway into these two issues.”

However, the study noted that it is difficult to predict what effect, if any, sit-stand desks would have in sedentary professions outside of NHS office work.

According to research by health insurer Vitality, 2.4 days of productive time is lost each year per person with a musculoskeletal condition.

Almost four in 10 (39%) staff with a musculoskeletal issue said their condition is a result of how their workplace is set up.

“Provision of standing desks is just one of the ways employers can help employees avoid these conditions. They can also help make appropriate arrangements for employees, to encouraging flexible working patterns, and work collaboratively to create effective recovery plans for those with existing injuries.”