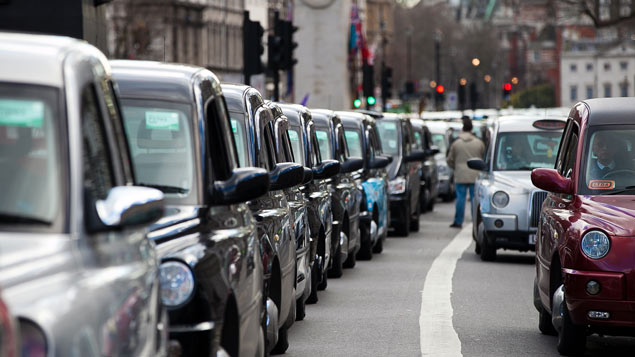 Taxi drivers experience the highest exposures to black carbon pollution compared with other professional drivers, such as couriers and truck drivers, it has been found.

King’s College London found the health of taxi drivers working in congested cities was being put at risk because they were exposed to black carbon levels that are on average a third higher than would be experienced at the side of a busy road.

Black carbon is the “sooty” substance emitted from petrol and diesel engines, coal-fired power plants and other sources that burn fossil fuel.

On average the drivers were exposed to 4.1 micrograms of black carbon per cubic metre of air while driving, which was around four times higher than the levels experienced when they were at home.

On some occasions the drivers experienced extremely high spikes in exposure to black carbon, often exceeding 100 micrograms per cubic meter of air for periods as long as half an hour. This is compared with 3.1 micrograms recorded on a busy central London road for the same period of time.

Shanon Lim, a research assistant at King’s College London, said: “We believe there are around a million people working in jobs like these in the UK alone, so this is a widespread and under-appreciated issue.”

He said the fact that black carbon levels were highest when drivers were in their vehicles suggested that being inside a vehicle does not offer any protection from air pollutants.

“In fact the opposite may be true: that air pollution can get trapped inside the vehicle for extended periods of time.

“We don’t know for sure why taxi drivers fare the worst, but it might be because taxis tend to operate in the busiest and most polluted parts of the city where ‘street canyons’ restrict the movement of air.”
The researchers plan to use the data to investigate how drivers can be protected from exposure to pollutants, including air filters.

The Institution of Occupational Safety and Health, which funded the research, said the impact of diesel emissions on the health of professional drivers had previously been overlooked.

“Robust data will help to identify exposure levels among this group of workers and different interventions to improve their health,” said research manager Mary Ogungbeje.