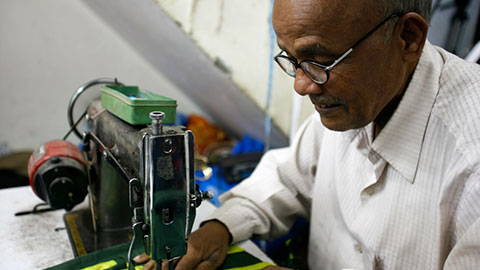 An ageing workforce brings a need for OH professionals to change some of their staff management techniques. Nic Paton finds out why.

It has been a long time coming and should not be a surprise to OH professionals, but the Government’s official statistics body, the Office for National Statistics, has announced that the number of people aged over 65 in employment is now more than one million for the first time.

The ageing of the “baby boomer” generation of the 1950s and 1960s means we can expect to see this statistic rise sharply in future years, with the number of over-65s in the population expected to increase by 49% over the next 20 years. Not all of these people will be in work, but there are several reasons why employers are facing the prospect of a gradual “greying” of the workplace. These include: the scrapping of the default retirement age; people retaining better health into older age; the UK’s pension and savings crisis; a lack of younger workers coming through; and the general economic climate meaning that people are less prepared to give up work.

Robin Hames, head of marketing for Capita Employee Benefits, says: “More people are reaching what was once the traditional retirement age and not being in a position to be able to afford to retire, or at least not fully retire. So it may be that we see more flexible working and more job sharing. I think that a lot of people will be reaching their late 60s and will be looking at semi-retirement, so funding their retirement partly through pension provision and partly through continuing working.”

Similarly, as Chris Jessop, managing director (UK and Europe) at AXA PPP healthcare’s health services division, ­argues, this ageing of our workforce presents both challenges and opportunities, with managing health likely to be one of the key challenges.

He says: “In one respect it’s good news – experienced workers can continue to add value, potentially playing an important mentoring role to less experienced colleagues. But on the other hand, there is the issue of health, as it’s understood that our health deteriorates as we age, which can result in higher worker absence rates via sick leave.”

“With this in mind, businesses have a vested interest to take a proactive approach to their workers’ health. Health deterioration can then be drastically reduced. As we grow older, associated health issues are ­reported to be a combination of the effects of genetics (25%) and lifestyle and environment (75%). So this implies that if we manage our lifestyles appropriately, there is, in theory, no reason that for most of us, we can’t be as productive and energetic in our 70s and 80s as we are when we are younger.”

Certainly, there seems to be no shortage of advice and guidance for employers in this area (see boxes).

One of the most recent pieces of advice was published in April 2013 by the Department for Work and Pensions when it updated its guidance, Employing older workers: An employer’s guide to today’s multi-generational workforce, to help employers both retain the skills and knowledge of older workers while improving their younger employees.

The Institution of Occupational Safety and Health also published useful guidance in 2009, entitled The health, safety and health promotion needs of older workers. This argued that, while we do generally see a number of physical and psychological changes with ageing, “these changes can be moderated by increased physical activity, intellectual activity and other lifestyle factors”.

For example, sensory abilities, which can be subject to change, can be accommodated via equipment or workplace adjustments, it recommended. Even many chronic diseases can be controlled and adjustments put in place in the work environment. In essence, the intervention of OH could help to “reduce the risk of early retirement from the workplace” while health promotion interventions were also generally seen as positive by older workers.

However, it is absolutely vital that employers do not make decisions based around assumption or, worse, prejudice, emphasises lead OH clinician at Bupa, Dr Jenny Leeser.

“You cannot assume that people, because their chronological age is older, will have a capacity for work that is different from anyone else. No one, after all, ages in the same way. So it is vital that employers do not generalise because that can lead to discrimination claims; you cannot assume that just because someone is in their 60s that they are now incapable,” she says.

“Employers need to keep a flexible, open mind and look at people and their abilities in the round. I think there is a lot employers can be doing to keep the workforce more healthy, across the board.

“OH facilitates health education and promotion and helps staff to take an interest in their health and fitness. But in terms of management it does have to be on a case-by-case basis; some people are old at 45 and some are still young when 65,” she adds.

Andrea Broughton, principal research fellow at the Institute for Employment ­Studies, makes the point that it has long been recognised that there are lots of advantages to employing older workers, who will often bring a lot of experience, knowledge and customer service skills to a workplace.

“They can often, too, play an important mentoring role to younger workers. It is true that older workers may have slightly different needs to younger people, but that will of course depend on the exact nature of the job and the individuals themselves,” she says.

“It may be a case of making adjustments to the workplace, so perhaps changing working patterns, making work more flexible, not asking older people to work nights, letting people work from home or nearer to home and so on.

“The way demographics are going, ­employers are going to have to think about how older workers are being managed within the workforce. It’s not going to ­require massive change, just thinking differently.

“In terms of OH, it’s perhaps ensuring that, when strategies are being devised, we think about what older workers will need too, so catching things earlier, making adaptations to working strategies earlier, being more critical and open-minded as well as more adaptable,” adds Broughton.

What OH can bring is expertise, agrees Dianah Worman, public policy adviser at the Chartered Institute of Personnel and Development (CIPD), which last year published a guide for employers on old age, health and the workplace, Managing a healthy ageing workforce: a national business imperative.

The CIPD report encompassed issues such as building the business case for an older, more diverse workforce, addressing myths such as “old people can’t wait to retire”, or that “older people are more expensive than younger people”, and talent management of older workers.

“Occupational health can also encourage and foster an environment in which employers are doing things that make sense. OH has the background and knowledge when it is available, that will be relevant to that particular workplace or environment.

“The fact that OH has a significant role in reducing exposure to risk means it can play an important role in raising awareness,” she adds.

Capita’s Hames predicts that we might see employers redirecting money that might otherwise have been invested in benefits such as private medical insurance – which can of course escalate considerably when employing people aged over 65 – into more health promotion and education.

It is also important to recognise that this process is more of a gentle slope than a cliff edge, giving employers considerable time to adjust their sights – with adjustment ­being the key word here, including probably more emphasis on remote and flexible working.

“I think success will be incumbent on employers considering their own employee demographic, supporting their wellbeing and seeing health and wellbeing as something less ‘fluffy’ and more something to be invested in for their own commercial interest,” he advises.

“OH can have a role as the champions of this business case, by trying to demonstrate the difference between prevention and cure, the positive impact that investment in this area can make on the bottom line.

“There has to be a commercial or financial underpinning of all this in order for it to attract attention at board level. Otherwise it can just go under the radar of key decision makers. So I think OH will have a key role to play, and not just in the delivery of these services. It will be about helping the business to focus on and engage with those forms of intervention,” he adds. OH