Talent management should be at the heart of mergers and acquisitions

By Chris Molloy on 9 Dec 2013 in HR strategy, Mergers and acquisitions 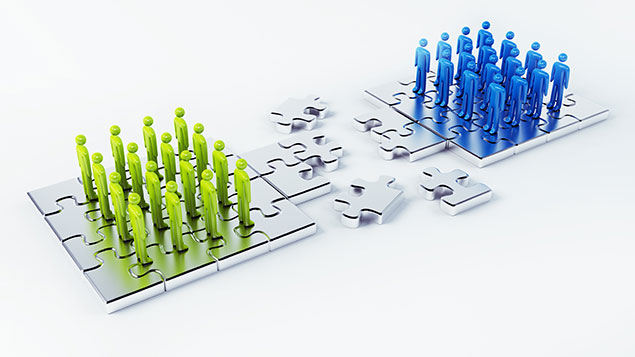 Mergers and acquisitions are a major part of business life for many UK workers. But getting the transition right is the real challenge, RSA Group’s Chris Molloy says.

Mergers and acquisitions (M&As) are common, with 111 in the UK in the second quarter of 2013 alone, according to the Office for National Statistics. Yet there is no one-size-fits-all formula to ensure smooth transitions. Managing mergers is time consuming and stressful and it is only by placing talent acquisition at the heart of the process that the maximum value can be realised.

Studies over the last 20 years showed that up to 83% of M&As fail to produce real benefit for the shareholders, let alone employees, and more than half actually destroyed value. The major causes for failure were cited as people and cultural differences. Unfortunately, there is no reason to believe that the situation has improved. Lack of “strategic fit” and “inappropriate management during integration” are cited as the primary reasons for poor M&A performance, according to a study of international M&As in the pharmaceutical industry published in 2009.

A narrow band of huge pharmaceutical companies had been growing larger in the previous 30 years as they swallow other firms. In 1985, the 10 largest pharmaceutical businesses accounted for around 20% of worldwide sales, whereas in 2002 the largest 10 accounted for 48% of sales, a striking transformation.

Despite these huge figures, the success of M&As is often damaged because a company is more than just its tangible assets. A company is its people, in “company” with one another, defining a culture and a framework for doing successful things.

Many M&As make perfect sense, and if done with people and culture at the centre of the process they can be both agile and productive. These are values that the pharmaceutical industry desperately needs to relearn as we move towards a future based around increasingly personalised medicines. M&As can bring together a portfolio of technologies such as diagnostics, devices and treatments that would never have been combined otherwise.

The people impact is often felt most immediately in sales and marketing, as customer confusion and employee confidence lead to fight or flight within days of any announcement. Research and development (R&D) teams are particularly vulnerable. During a merger, R&D departments are the last to combine as a company’s pipeline and patents are its most prized assets and are not revealed to competitors in case the deal falls through. It can take up to nine months for the completion of departmental merging, which is inevitably highly stressful and time consuming for management and employees. No new projects will be undertaken in this period, nor will any major hiring decisions be taken beyond the existing employees of the merging firms.

A key critic of the M&A process in the pharmaceutical industry is Dr Raymond Firestone, a scientific fellow at Boehringer Ingelheim, who recently published an account of the merger between two large pharmaceutical firms.

“Mergers have a strong negative personal impact on researchers and, consequently, the innovative research environment,” he says. “One merger I witnessed in the late 1980s was a scene of power grabs and disintegrating morale. Positions were often decided by favouritism rather than talent. Productivity fell so low that an outside firm was hired to find out why. Of course, everyone knew what was wrong but few – if any – had the nerve to say it.”

This is an indication of how badly mergers can go when HR is not on board from start to finish. It also reflects a time before talent acquisition existed in its current form. Yet it is an important reminder that a company’s human capital is perhaps even more crucial than its financial assets.

In almost all M&As, one side has the upper hand and is able to set the agenda. True mergers of equals are the exception rather than the rule, resulting in the impact of culture from the more dominant firm prevailing and employees of the less dominant firm being confronted with an entire new set of rules and values. Enforcing a dominant uni-culture almost always fails, not because it is a poor one, but simply because it does not reflect how humans work when they join together.

The same applies to operations and processes. Both parties have created success and have something of value to show each other. The acquiring firm’s processes and procedures are not by definition the better ones. An objective and transparent analysis of both sets of systems and procedures should lead to the selection of the most appropriate ones.

M&As cause organisational stress, but this is dwarfed by the combined personal stress across employees at all levels. From the boardroom to the bench, no one is spared. It is emotional for all and therefore handling emotion is critical.

Mergers call for collaboration, but non-collaborative – or fear-based – behaviour is natural when people realise they might be in direct competition with their counterparts.

Scientist John L LaMattina says that when he was working in the R&D department at a large pharmaceutical company, he was pleased to be headhunted during an M&A: “I was really relieved; the stress at work was incredible.”

This is surely an indication of the importance of a professional HR strategy during an M&A.

While much has been written about the objectives and success rates of M&As, historically there has been a general complacency over talent acquisition and HR’s role in the process. Instead of enabling the merger and drawing up plans for how to manage the problem, HR can and should be part of the team that targets acquisitions.

M&A scholar Peter Howson sums it up bluntly: “The benefits of due-diligence HR is often underestimated and its findings are often not integrated with the rest of the due diligence. Do not fall into this trap.”

The HR departments of both the acquiring and the acquired company have to play a pivotal role in guiding all employees through a difficult process, which starts for most with the announcement of the M&A and ends well beyond the set integration date.

Communication is critical and must be clear, honest and open. It is vital that people understand what is being communicated and critical that those managing the process are aware that the style of communication may differ between the two companies.

Although senior managers will go out of their way to emphasise the importance and value of the employees from the company that is being taken over, their primary preoccupation is often on the immediate concerns of financial return – particularly of shareholder value. It is understandable, but not forgivable, to focus solely on the predicted financial bottom line rather than the softer, less predictable realm of employee satisfaction and culture integration. However, any CEO building for the long term must focus on their company and this is often most effective when there is a tight bond between business, HR and talent acquisition leaders.