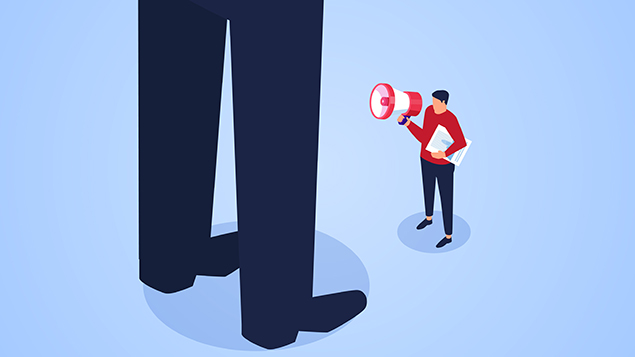 Many respondents reported feeling bullied or lacking autonomy in the workplace

Four out of five workers in the charity sector have suffered workplace stress in the past 12 months, and 42% felt their job was damaging their mental health.

The anonymous survey by the union Unite also found that 44% of respondents felt their organisation was badly managed, 34% didn’t feel valued at work and 40% thought their job was not secure.

Quotes from respondents suggested there was “limited support from HR”, and 22% disagreed or strongly disagreed with the statement “I work in a safe and healthy working environment”.

One said: “I have no autonomy and limited support from HR. My job is slowly killing me. I have been grabbed twice by my manager, subjected to enforced hugging, eye-rolling, muttering under her breath and humiliation at meetings in front of others. I have either been told about (by other alleged victims) or directly witnessed bullying of nine other former colleagues.”

Another said: “It’s a strange phenomenon to be bullied by management/employer who is a charity, so many things about this employer are great, but some very wrong and ‘they’ can’t see it nor understand.” A number of employees had been signed off sick because of stress.

The respondents included staff working for charities such as Citizens Advice, Action for Children, Age UK, the RSPCA, Save the Children, Oxfam, Mind, Amnesty International, Christian Aid, Friends of the Earth, the Samaritans and Greenpeace UK.

Despite the impact on their mental health, 90% said they believed their work was important. Unite has produced a guide on how union reps can challenge their employers on workplace issues that cause mental health problems. It also suggests reps sign up for mental health awareness training.

National officer for charities and the voluntary sector Siobhan Endean said: “Staff employed by charities and NGOs tend to be very committed to their organisation and are usually loathe to speak out as their fear it will damage the cause they work for. However, many workers are clearly at breaking point.

“It is impossible to get away from the stark fact that the catastrophic cumulative impact of austerity cuts on the sector and mismanagement of dedicated and passionate workers is making them ill and creating widespread misery.

“However, this is no excuse for them to challenge the long hours, excessive workloads and bullying which members say is a huge factor in mental health and stress problems. They must stop exploiting the goodwill of their workers.”

At the start of this year, an independent review into misconduct at Oxfam found that a “toxic work environment” had allowed allegations of bullying and harassment to go unchecked. The charity was also found to have covered up sexual misconduct by aid workers in Haiti after the earthquake in 2010.

Endean added: “It is impossible to get away from the stark fact that catastrophic mismanagement of dedicated and passionate workers is making them ill and creating widespread misery.

“Unite is putting employers on notice that management has to change and they need to work with our representatives to tackle these problems that are at epidemic levels.”