Easing chronic back pain with the Alexander technique 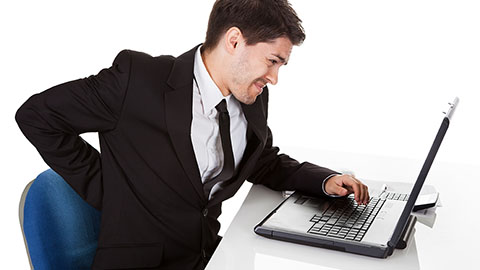 A set of exercises can offer non-prescription relief for those with back pain. Alexander technique teacher Mille Ball finds out more.

In August 2008, the BMJ published the results of a randomised, controlled trial that indicated that one-to-one Alexander technique lessons have long-term benefits for patients with chronic back pain (Little et al, 2008). This trial was funded by the Medical Research Council and NHS Research and Development Fund. The objective of the research was to determine the effectiveness of the Alexander technique for patients with chronic and recurrent back pain when compared with massage therapy or exercise combined with nurse-delivered behavioural counselling.

The trials took place across 64 general practices in England and involved 579 patients with chronic or recurrent low back pain. Some 144 were randomised to normal care, 147 to massage, 144 to six Alexander technique lessons and 144 to 24 Alexander technique lessons. Half of each of these groups were randomised to exercise prescription. The main outcomes were measured using the Roland-Morris disability score (the number of activities impaired by pain) and number of days in pain.

The results showed that exercise and lessons in the Alexander technique remained effective at one year. In other words, the benefits of Alexander technique lessons were long term and maintained. In comparison, six massage sessions showed benefit in the short term when measured at three months, but were much less effective when reassessed one year later.

Exercise after six lessons achieved 72% of the effect of 24 lessons. Quality of life was also improved significantly with the Alexander technique and no significant harms were reported. The study concluded that one-to-one lessons in the Alexander technique from registered teachers have long-term benefits for patients with chronic back pain. Six lessons followed by exercise prescription were nearly as effective as 24 lessons.

The large scale of data provided a sufficiently large number of patients for this trial to be taken seriously by the medical community.

Economic evaluation of the Alexander technique

Further research has found that Alexander technique lessons are cost effective for the NHS.

Economic evaluation indicates that six lessons in the Alexander technique combined with exercise is the most effective and cost-effective option for primary care providers. The researchers found that a combination of six lessons followed by exercise cost £64 per point reduction on the Roland-Morris score, £43 per additional pain-free day and £5,332 per quality-adjusted life year (QALY) gain.

What is the Alexander technique?

Most people lack an awareness of their postural habits and patterns of harmful muscular tension. The Alexander technique teaches a person to recognise patterns of pain-producing behaviour and make changes that reduce spasm and improve joint mobility. With the Alexander technique, joint surfaces become less compacted and there is better tone and lengthening of muscles throughout the body. There is also maximum space and freedom for the lungs to expand, the heart to pump, and for digestion and elimination to flow.

The Alexander technique understands that stress is a stimulus, but it is a person’s response that is important. Stress does not have to lead to strain on the body. Our choices about the way we conduct ourselves in everyday activities determine the quality of our lives.

The Alexander technique teaches a capacity for inner quiet and a calmer and clearer state of mind, rather than the common experience of feeling “all wound up”.

“We already notice very striking improvements in such diverse things as high blood pressure, breathing, depth of sleep, overall cheerfulness and mental alertness, resilience against outside pressures, and in refined skills such as playing a musical instrument,” says Professor Nicholas Tinbergen, Nobel Prize winner for medicine and physiology.

“Its thoughtful approach has made me calmer, improved my concentration and given me a clearer sense of my own wellbeing. I am grateful for it.”

A healthy infant tends to display poised balance in their bodies. A lengthening back evolves naturally as they learn to support themselves, and they are able to sit upright without strain.

From this state, through childhood, then adolescence and into adulthood, a person experiences all sorts of stimuli associated with modern living.

Some of these include sitting for long periods at a desk, dealing with body growth and change, carrying school bags and social pressures, followed by work stress, time at a computer, time in front of a television, time sitting in cars and illness. Throughout a person’s life, the unconsciously maintained balance of the infant gets overridden by all sorts of assumed postures.

From this loss, and based on the understanding that use affects functioning, the Alexander technique re-educates a person back to using their body more effectively.

Frederick Matthias Alexander, an actor who developed the principles of the technique in the 1890s, says: “Re-education is not a process of adding something, but of restoring something. It was to meet the need of restoring actual conditions of use and functioning that had been previously experienced and afterwards lost that my technique for the re-education of the use of the self was evolved.”

An Alexander technique teacher helps a person recognise the harmful distortions that have accumulated in their body, and then to let go of these and re-align the body for better health and functioning.

In a lesson, the pupil experiences the sensation of their body operating well, which includes learning how to counter-balance the gravitational pressure on the back so that the spine lengthens upwards rather than collapsing down as it commonly does.

Over a series of lessons, the pupil will then learn to deal with all the varied stimuli they receive in their daily lives in a way that does not distort or scrunch their bodies. Consciously re-educating the body back to good, natural balance and coordination is quite distinct from imposing some new posture on the body through instructions such as “stand up straight”.

For example, to establish the degree of daily tension even in a simple activity, a person is told to observe themselves during a commonplace activity such as brushing teeth, noting any tension in the neck, as well as the grip on the brush and any interference with breathing.

From any distortions that may be discovered, one can extrapolate to imagine the strain a person puts themselves under in more complex tasks.

The Alexander technique requires expert intervention on the part of an experienced Alexander technique teacher. It is taught on a one-to-one basis and requires several lessons – generally, six is recommended as a minimum. It is a self-help method where the pupil must ultimately take responsibility for their health once they have learned the underlying causes of their problems and a teacher has given them an experience of improved use.

Who was FM Alexander?

Frederick Matthias Alexander was born in Australia in 1869. As a young actor, he found himself losing his voice during performances. As doctors could offer no more than temporary relief, he set out to discover for himself what was causing the problem. He questioned what it was that he was doing during performance that was causing his loss of voice.

A similar question might be posed by a person suffering from back pain: what is it that I am doing with my body that causes or contributes to my pain? Or, if a patient presents with neck pain, the practitioner would begin by looking at what the patient is doing that is causing this pain.

As Alexander got better at preventing his patterns of misuse, the quality of his voice improved. He found that the respiratory problems that had beset him from birth also cleared up.

He found that the manner of doing things, which he called use, affects functioning, and that this applied to all of us.

Alexander had discovered the centre that is the primary factor in organising human movement. This primary control is a dynamic relationship of the head, neck and back, which affects the whole body. Although hard to describe in words, the workings of the primary control are experienced by a person right from their first Alexander technique lesson, which gives a sense of release and energising.

How does use affect functioning?

If a person sees themselves on video they may be surprised at how they appear, as people are often unaware of their own traits. Yet the same people may well recognise specific postural characteristics in others – for example, their gait or way of standing.

The Alexander technique makes a person aware of their own habits. An office worker, driver, mum, dentist, musician or chef may all start to hold themselves partly contracted even when they are no longer involved in the pressure of their jobs.

This residual tension leads to particular postures that – over time – can come to dominate an individual’s character.

Some of these habits may begin to take their toll on the body; there may be compression of joints and congestion of internal organs, or some muscles will be doing too much work and some too little.