Jobseekers advised to avoid words such as ‘depression’ 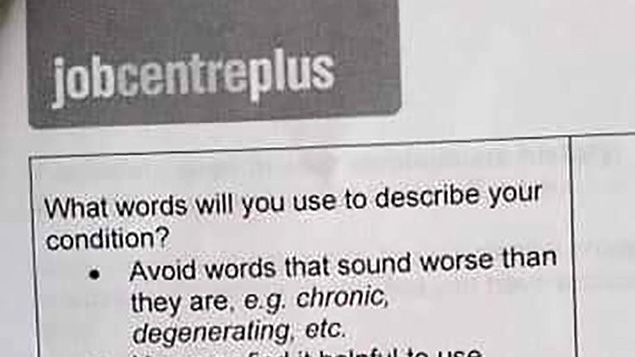 Jobcentre Plus employees have been advised to tell people looking for work to hide mental health issues with terms such as “low mood”.

A jobseeker in Dorset posted a leaflet online that he had been given at his local job centre. It suggests that jobseekers produce a “positive health statement” during the recruitment process, avoiding disclosing diagnoses such as myalgic encephalomyelitis (ME) or depression.

The leaflet said: “You may wish to avoid terms such as depression, ME or low back pain and use more general terms such as low mood or a mental health condition, a fatigue-related condition, an ongoing pain condition etc.”

Is it a breach of the law on disability discrimination to ask about health in recruitment?

Mental health charity Mind criticised the advice, highlighting how legislation provides protection for those with both physical and mental health problems if they have a substantial effect on their normal daily activities.

“Anyone who discloses a mental health problem at work deserves to be treated with respect, and job centres should not be reinforcing stigma by advising people not to disclose,” said Ayaz Manji, a senior policy officer at Mind. “People with mental health problems have just as much to offer as anyone else in the workplace, and it’s right that this advice is being challenged.”

Shadow disabilities minister Marsha de Cordova also raised concerns about the wording of the document in the House of Commons yesterday. She said: “It can’t be right that a department is expecting people to downplay their disability or health condition.”

A spokesperson for charity Action for ME added that they were “outraged that people with ME are being told to keep quiet about the reality of their experience”. Around 250,000 people in the UK have the condition.

The Department for Work and Pensions responded to the criticism by explaining the document was “well-intentioned local advice”, which has now been removed. “We would always encourage jobseekers to speak freely about a health condition or disability,” a spokesperson added.

Under the Equality Act, employers should not ask a job applicant questions about their health before offering them employment, but they must make reasonable adjustments to accommodate job applicants with disabilities during the recruitment process.

3 Responses to Jobseekers advised to avoid words such as ‘depression’