‘Long Covid’: should we be thinking polio, not flu? 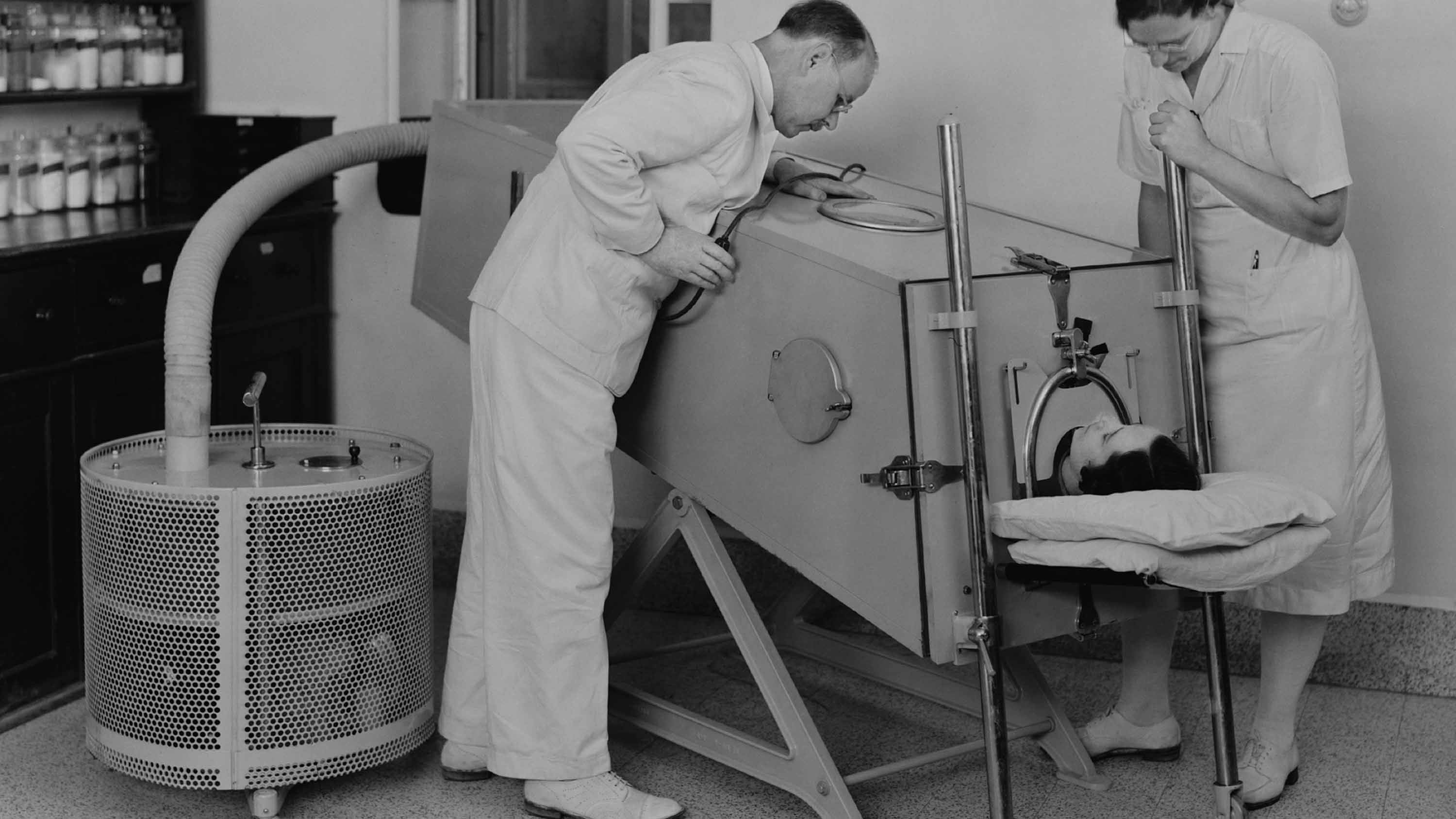 A polio patient in an 'iron lung' in the 1940s, which assisted breathing when the muscles were weakened. Image: Shutterstock

The speed at which we have learned about Covid-19 over the past year, and the way in which resources have been deployed, has been a real credit to the profession, argues Astrid Palmer. But, as occupational health practitioners, there is still much that is yet to come clear, especially the potential long-term health outcomes of the virus for those of working age.

On a medical trip to China in 2002, we were disappointed when a visit to a respiratory hospital in Beijing was cancelled because a number of patients had been diagnosed with severe acute respiratory syndrome (SARS). It was only investigated because officials had noticed an increased number of burials in the rural countryside.

People lived in single storey dwellings, miles from anywhere with no gas, electricity, mains water or sewage; people at one end of their dwelling and animals at the other. There was a designated field where they buried their dead, each grave marked with a large red banner.

All of which brings me to late September 2019 and the cluster of unusual flu-like cases reported to the World Health Organization by Chinese authorities. By the end of December (as we all now know only too well), phones and email inboxes were hot with calls and messages from experts in many fields all around the world, all concerned that a new virus was spreading quickly that seemed almost untreatable. By January we were all hearing about the SARS-CoV2 virus and Covid-19.

By March 2020 we were, of course, in lockdown. Clinicians and scientists, young and old, internationally, were sharing a common experience – we didn’t know anything about it, how it spread, how to prevent it, how long it lasted, what the symptoms were, how to treat it and whether patients would make a full recovery or have residual debility. Like my colleagues, I did my best to reassure workers but actually I knew little more than they did.

Much more than post-viral fatigue syndrome and flu

In early June I was listening to a Royal Society of Medicine (RSM) webinar, part of its Covid-19 series and the interviewee – almost as a throwaway remark at the end – said: “Think of polio, not flu.” It was one of those occasions when you literally sit up straight with a jolt, as though lightning had struck you. It took me back all those years to those children in the iron lungs.

Occupational health, I realised, wasn’t simply going to be managing cases of post-viral fatigue syndrome – modified hours, modified duties, reassurance and so on. This was much bigger than that. I needed to update all my knowledge.

I took to watching as many as webinars as possible, both RSM and SOM (Society of Occupational Medicine). I learned how outpatients’ appointments were going to change, probably forever. How elective surgery was holding its breath. How, ultimately, private hospitals would end up taking more NHS patients, but how there was a massive insurance issue to resolve because trainee surgeons aren’t covered by insurance to work there

I was totally absorbed by 12 one-hour urology webinars (and got most of the questions right in the end-of-term exam). For a few moments I even contemplated giving up occupational health and becoming a urologist.

Then a year ago (in other words last April) I was invited to become part of SOM’s “return to work” working party that was working to create a toolkit for SMEs. I remember asking Professor Anne Harris, SOM president and Occupational Health & Wellbeing’s CPD editor, when she wanted my contribution by and she replied that, “with everything Covid, yesterday would be good”. In the event, a toolkit that Anne had hoped would be accomplished in three weeks was turned around in 10 days.

It was then proposed the SME toolkit should be followed by a toolkit for high street shops. I did some of the groundwork for the neurodiversity and disability section, working with a multi-disciplinary team that reflected the membership of the SOM including Professor Kim Burton at University of Huddersfield, Joy Reymond at Work & Wellbeing and Emma Persand at Lemur Health. Of all the contributions I made, the statement that “guide dogs can’t be trained to social distance” was perhaps the most satisfying!

I revalidated in March 2020 and intend to coast to retirement in three years’ time. It’s curious, the past year has been so challenging in so many ways. Yet I also now feel invigorated; the experience – and the year – of the pandemic has brought out the best in so many people, especially in terms of collaborative research and working. I’ve learnt so much and connected with so many wonderful new colleagues

Polio may, thankfully, now almost be forgotten. Unfortunately I don’t think SARS-CoV2 will fade in the same way, at least not in my lifetime. But my message for practitioners? Think polio, not flu – as that may be important for us all to be keeping in mind in the months and years to come.

‘Long Covid’ can cause breathlessness, organ abnormalities and fatigue for months

An Oxford University study looking at the longer-term impact of Covid-19, so-called “long Covid”, has concluded that a large proportion...