CPD: Older workers and heat stress: challenges of working in a hot environment 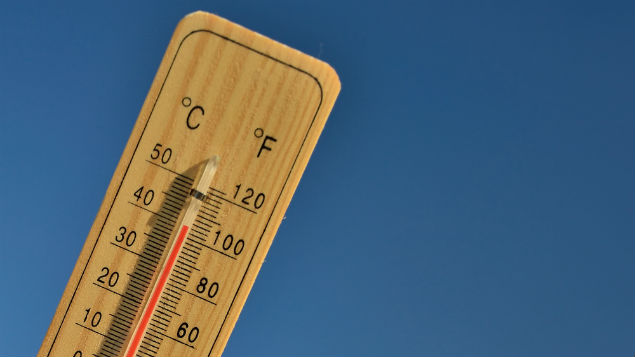 The number of older people in the workforce is increasing and with it the risks related to older workers and heat stress. Jenefer Fraser and Anne Harriss look at the risks and what employers should do to support them.

Although the UK has a generally mild climate, there have been occasions when the weather has been particularly hot.

Temperatures in June 2017 exceeded 30C in many parts of the country, and some days were reported by the BBC to be the hottest since 1976, with temperatures of 34.5C being recorded at Heathrow (BBC, 2017).

If climate change theorists are correct then such conditions are likely to become more commonplace, posing the most serious global threats to the health of the human race (McIver et al, 2016).

This is widely acknowledged to have a diverse and significant impact via increasing temperatures of the oceans and air, altered rain patterns, rising sea levels, increasing intensity and frequency of extreme weather events.

The Intergovernmental Panel on Climate Change (2014) has stated that it is undeniable that these trends will continue or even accelerate. The negative health effects related to a changing climate include direct effects such as physiological consequences of heatwaves.

Indirect effects include disruption to societal infrastructure and food supply from environments that are hotter and increasingly humid. Lastly, there may be diffuse effects related to organisational dysfunction – for example, disrupted health services and population displacement resulting from rising sea levels.

Over the past few years, the Meteorological Office (2017) has reported several periods of exceptional warmth and heatwaves in the UK, with record breaking temperatures being reported. The hottest day recorded occurred on 10 August 2003 with a temperature of 37.9C. By the end of the summer, the heatwave had claimed the lives of 2,000 individuals from heatstroke or dehydration.

Much has been reported on the disruption that extreme heat can have on the country’s infrastructure. Examples include the impact of drought on crops, softening of road surfaces and bending of train rails in the heat. But the human impact should also be acknowledged.

This article will explore heat stress, particularly in older workers, who may experience negative health effects from working in a hot and humid environment.

Recent increases to the statutory state pension age will result in people remaining at work for much longer, which may make them more likely to suffer detrimental effects of heat stress.

The increase in global temperatures and relative humidity has a direct effect, increasing the incidence of heat stress. Workers more vulnerable to these effects include those with long-term conditions, particularly those with co-morbidities, and these are more likely to affect the older rather than the younger adult.

Pre-existing health conditions that may increase the likelihood of heat stress include endocrine disorders such as diabetes, which is stated to be an increasing threat to health, with the number of individuals being diagnosed with type 1 or type 2 diabetes doubling since 1996 (Diabetes UK, 2017).

Additional risk factors include high blood pressure and dehydration. Recent research suggests heat illness due to dehydration to be a contributing factor in the development of chronic renal failure (Garcia-Trabanino et al, 2015).

Medications including antihistamines, beta or calcium channel blockers, diuretics or tricyclic antidepressants increase the potential for a heat-related disorder as their mechanism of action affects the body’s ability to dissipate heat due to increased metabolic activity (Rogers et al, 2007).

The varying severities of heat illness (Coris, Ramirez and Van Durme, 2004) include heat cramps, presenting as muscular pain or spasm during physical exertion. Heat cramps can be the first signal that the body is facing difficulties dealing with the temperature.

If the individual continues to work or exercise in hot or humid conditions, heat exhaustion can occur with symptoms including fatigue, headache and nausea. Vasodilation to the skin increases while vasoconstriction to the organs occurs, potentially leading to a minor form of shock. If untreated, body temperature continues to increase until symptoms of heatstroke become evident.

Heatstroke is a medical emergency in which the thermoregulatory system fails. Body temperature increases substantially to a core temperature exceeding 40C. This results in hypotension and tachycardia, tachypnoea, syncope, cessation of sweating and loss of consciousness. It may also lead to altered mental status, convulsions, and, ultimately, death if not treated.

The Royal College of Nursing (2013) propose that healthcare workers have a high physical workload. Performing physically demanding work within a hot and humid environment increases the challenge placed upon the thermoregulatory system.

Factors that influence thermoregulation include environmental temperature; heat can be lost by radiation, conduction, convection and evaporation of sweat.

If sweat evaporation is the primary means of cooling the body, the loss of fluid via sweat must be matched by fluid intake to prevent dehydration leading to a decrease in physical work capacity.

In the workplace, thermal discomfort is cited as a major cause of dissatisfaction if individuals are exposed to extremely hot or cold environments (Morgado et al, 2015), resulting, potentially, in decreased performance and work quality. Thermal stresses are present in both indoor and outdoor work environments, due to natural, or a combination of the natural and artificial ambient, temperature.

Taking a neonatal intensive care unit as an example, the ambient environment will be kept warm, recommended to be 22-26C (Laing et al, 2004), with a relative humidity of 30-60%. There is a lot of heat-generating electrical equipment; each bed space will have 20-24 electrical sockets; lighting will increase the ambient temperature; and staff working in this environment maintain close contact with parents, which may increase body temperature by conduction or radiation from other persons.

The work is physically, mentally and emotionally demanding, breaks may be irregular and all these factors combine to increase the risk of developing heat-related illnesses.

The Office for National Statistics (2017) reports that there are more than 1,208,000 individuals in the UK workforce who are over the age of 65. The state retirement age is increasing to 67 years of age for both men and women, and is expected to rise further.

Many workers have found that they may not be able to retire early for economic reasons. In particular, this has been the case for female workers as a result of the raising of the state pension age for women, exacerbated for some by them taking time away from the workplace to raise a family or other caring responsibilities, such as aged parents.

Conversely, many healthcare workers are fulfilled through work and wish to carry on past retirement age, health and fitness status permitting them, to undertake what can be very physical job requirements. It is, therefore, critical that organisations commit to making workplaces a safe and supportive environment for the older worker.

Older adults are at greater risk for occupational injuries according to Wright-Beatty et al (2014). The heat-loss response of increasing blood flow to the skin and inducing sweating is known to be reduced in older adults; this may decrease the capacity to dissipate heat and induce heat stress.

Therefore, performing physically demanding tasks in a hot environment may induce fatigue earlier than in younger colleagues as suggested by Perry (2010), which could bring about an increase in occupational injuries.

The physical working environment influences stress levels both positively and negatively. Vardaman (2014) has stated that physical factors such as work environment, work conditions, physical demands of the role and ergonomics have received little consideration in the literature regarding staff turnover.

It has been documented by the Royal College of Nursing (2016) that older workers take a longer time to recover from the impact of workplace stressors such as long shifts, night working and physically and emotionally demanding job roles.

Factors such as humidity and temperature are stated by Applebaum et al (2010) to negatively influence job satisfaction and performance. Heat stress can have a detrimental effect on worker behaviours, error frequencies and communication patterns and, ultimately, impact on their intention to remain in their role, increasing staff turnover and decreasing retention of healthcare workers.

Organisations could look towards investing in improving physical working conditions to enhance worker comfort as a way of reducing turnover and increasing retention of staff (Lewis, 2015).

Hot flushes are experienced by 20-25% of women due to a decrease in oestrogen production and are described as a sudden onset of intense heat usually in the neck and face leading to an increase in sweating. These symptoms adversely affect women in the workplace due to anxiety, including feelings of embarrassment that they may not be presenting the professional persona that they wish to.

Recommendations to improve the working environment for menopausal women include facilitating discussion surrounding menopausal symptoms. There is an acknowledged reluctance for colleagues to discuss gender-specific health symptoms in the workplace, other than pregnancy.

The temperature of the workplace should be assessed to improve control of temperature and ventilation in line with the Management of Health and Safety at Work Regulations (Health and Safety Executive, 1999). Managers can consider flexible working hours for affected staff.

Uniforms may need to be considered as these may be manufactured from materials that may inhibit evaporation of sweat, thereby increasing temperature.

Managers should also consider access to a quiet area that staff could use for the short period of time required to manage symptoms of hot flushes.

Strategies to modify work and the working environment to lessen the risk of heat stress occurring include implementing engineering controls to reduce the source of the heat or air conditioning to reduce the temperature of the air.

Managers must understand the physical demands of the job roles and provide information regarding heat stress signs and symptoms. Sufficient rest periods and access to water to prevent dehydration must be provided (Rogers et al, 2007).

The Occupational Safety and Health Administration (OSHA) of the United States enforces heat illness cases and declares heat-related illness to be the most common cause for work-related hospital attendances among workers. This is mainly among construction and outside workers (Arbury, Lindsley and Hodgson, 2016). It was reported that two-thirds of the 20 fatalities that occurred between 2012 and 2013 happened between the first and third days of work.

Resources available on the Health and Safety Executive website refer to the importance of acclimatisation.

Acclimatisation to heat by regular exposure to hot environments can reduce any negative effects associated with heat illness.

However, difficulties arise in countries such as the UK, where extreme heat is infrequently experienced and workplaces have limited experience of dealing with such issues. OH professionals would be well advised to consider how working in elevated summer temperatures is best managed.

In conclusion, health effects from increased temperatures can have both positive and negative effects. An increased sense of wellbeing can be experienced when temperatures start to increase and the sun starts to come out after the long, cold, dark winter.

Health symptoms such as fatigue, irritability, inability to concentrate along with all the other negative health effects related to heat stress provide a negative experience.

Organisations can do a great deal to assist, by creating a healthy workplace and supporting older workers to remain in the workforce with lower risk. This will, in turn, have benefits for the recruitment and retention of the healthcare workforce.

Laing I, Ducker T, Leaf A, Newmarch P (2004). “Report for the British Association of Perinatal Medicine: designing a neonatal unit”.

Faculty of Occupational Medicine of the Royal College of Physicians, (2016). “Guidance on menopause and the workplace”. London: FOM.

Office for National Statistics (2017). Estimates of employment, unemployment, economic inactivity and other employment-related statistics for the UK.

Royal College of Nursing (2013). “Beyond breaking point? A survey report of RCN members on health, wellbeing and stress”. London: RCN.