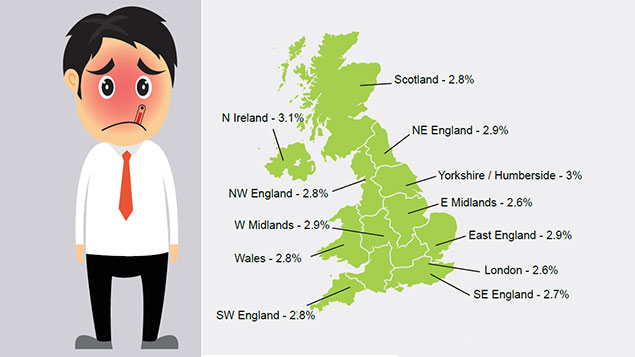 This costs employers an average of £16 billion, or a median cost of £11 billion. XpertHR’s research findings are based on data provided by 670 organisations covering just under two million employees, making it the most current and largest survey of its type at this time.

Median figures stand at 2.5% of working time, translated as 5.7 days per employee. These figures are typically considered a more accurate measure than the average (as the median reduces the influence of very high or low figures in the overall calculation).

The public sector has, traditionally, suffered from higher rates of sickness absence, compared with the private sector.

Noelle Murphy, author of the XpertHR report, says that while the public sector continues to have higher rates of sickness absence, this figure has dropped from a median of 9.4 days per employee to 8.1 days.

“Certainly, cost cutting will have contributed to fluctuations in absence figures within this sector, but we know that it is the consistent, proactive management of absence – through measuring, monitoring and intervention – that leads to a permanent decrease,” says Murphy.