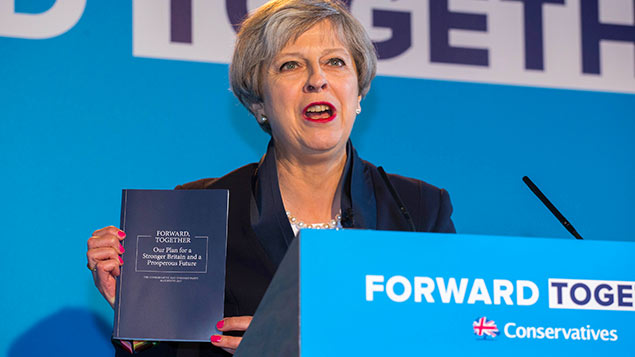 Theresa May launched the Conservative Party’s 2017 election manifesto today, and for HR and employers there are no big surprises. Having already laid out her plans on workers’ rights earlier this week, and with many policies announced over the past year, there is not much we didn’t already know. But, as is likely in any 88-page document, there are a few items of interest that may not already be on your radar.

One of the first pledges is that a Tory government would, as promised, increase the personal income tax allowance to £12,500, with the higher rate starting at £50,000. The Conservatives say they would not increase the level of VAT but, as expected, there are no longer any similar promises for national insurance (NI) or income tax.

That said, the Conservatives will offer a holiday on employers’ NI contributions for a full year, for businesses hiring people from certain disadvantaged groups. This includes people with a disability, those with chronic mental health problems, those who have committed a crime but have repaid their debt to society, and former wards of the care system.

The NI holiday will also apply to organisations hiring someone who has been unemployed for a year or more, and to veterans leaving the armed forces.

Peter Cheese, chief executive of the CIPD, said the NI holidays were well-intentioned, but that evidence from previous similar initiatives suggests it is likely to prove either wasteful or ineffective.

“A better way forward is to encourage more targeted and bespoke support to companies who might be persuaded to take more disadvantaged people on, especially if they fear the impact of Brexit on labour supply and want to develop alternative sources of less-skilled labour from the domestic population,” he said.

A Conservative Government would legislate to make executive pay packages subject to strict annual votes by shareholders, and listed companies would have to publish the ratio of executive pay to the broader UK workforce pay. Cheese said: “It would be better if companies were benchmarked against their own median pay.”

The national living wage would continue to increase to 60% of median earnings by 2020 (currently forecast to be £8.75) but, after that, only by average earnings growth.

Last October, the Government commissioned Matthew Taylor, the chief executive of the Royal Society of Arts, to review the changing labour market. His final report is expected this summer, but a new Conservative Government would “act to ensure that the interests of employees on traditional contracts, the self-employed and those people working in the ‘gig’ economy are all properly protected”.

It would increase punishments for companies and directors caught mismanaging pension schemes. It would build on existing powers to give pension schemes and the Pensions Regulator the right to scrutinise and, in extreme cases, stop mergers, takeovers or large financial commitments that threaten the solvency of a pension scheme.

It would consider introducing a new criminal offence for company directors who deliberately or recklessly put at risk the ability of a pension scheme to meet its obligations.

Subject to safeguards, a new Conservative Government would introduce, for employees, a right to request information relating to the future direction of the company.

These strengthened arrangements would apply to publicly-listed companies, but there would also be a consultation on how corporate governance of privately-owned businesses could be strengthened.

With regard to state pensions, May and her colleagues promise to maintain the “triple lock” but only until 2020, when it would introduce a new “double lock”, meaning that pensions would rise in line with the earnings that pay for them, or in line with inflation – whichever is highest.

The Tories would continue to extend pensions auto-enrolment to small employers and make it available to the self-employed.

With annual net migration at 273,000, the Tories have maintained their longstanding target to reduce immigration to the “tens of thousands”.

They would increase the earnings thresholds for people wishing to sponsor migrants for family visas and impose higher requirements on students wanting to work in Britain after their studies.

The Party would ask the Migration Advisory Committee to make recommendations on how the visa system can be better aligned with industrial strategy. It envisages reserving significant numbers of visas for workers in strategically important sectors, such as digital technology.

And it would double the immigration skills charge levied on companies employing migrant workers, to £2,000 a year by 2022.

Tony Haque, a Baker McKenzie immigration lawyer, said the proposals “point to a tough stance on immigration particularly from outside the EU, and it will be interesting to see what the impact will be to business’ confidence at a time of uncertainties surrounding Brexit.

“How migration from the EU will actually be controlled after we leave the community is still unclear and there is no new guidance on this.”

The Brexit mantra, “no deal is better than a bad deal”, is reiterated. The Conservatives would control immigration and secure the entitlements of EU nationals in Britain and British nationals in the EU. Workers’ rights conferred on British citizens from our membership of the EU would remain.

The UK would establish an immigration policy that allows us to reduce and control the number of people who come to Britain from the EU, while still allowing us to attract skilled workers the economy needs.

The Party would enact the Great Repeal Bill converting EU law into UK law, allowing businesses and individuals to go about life knowing that the rules will not change overnight. This approach means that the rights of workers would continue to be available in UK law at the point at which we leave the EU.

The manifesto also states that the Tories would not bring the EU Charter of Fundamental Rights into UK law. They would not repeal or replace the Human Rights Act while the process of Brexit is underway, but “would consider our human rights legal framework when the process of leaving the EU concludes”.

The UK would remain signatories to the European Convention on Human Rights for the duration of the next Parliament.

The manifesto states that companies with more than 250 employees would be required “to publish more data on the pay gap between men and women”. Whether or not “more data” is in addition to the gender pay gap reporting requirements launched in April 2017 is unclear.

What is clear is that the gender pay gap would be joined by a race pay gap; large employers would have to publish the pay gap for people from different ethnic backgrounds if the Conservatives get into power.

The Tory Party would improve the take-up of shared parental leave and help companies provide more flexible work environments that help mothers and fathers to share parenting. It would also support employers to take on parents and carers returning to work after long periods of absence.

The manifesto also talks about the “mental health gap”. The Tories would “transform how mental health is regarded in the workplace, amending health and safety regulations so that employers provide appropriate first aid training and needs assessment for mental health, as they currently do for risks to physical health”.

As expected, protections under the Equality Act 2010 would be extended to discrimination to mental health conditions that are episodic and fluctuating – currently, conditions need to be long term, lasting 12 months or more.

The Tories want the NHS to become a better employer. It would strengthen the entitlement to flexible working to help those with caring responsibilities for young children or older relatives; and create new services for employees to give them the support they need, including quicker access to mental health and musculoskeletal services. It would act to reduce bullying rates in the NHS, which are “far too high”.

They would also recruit up to 10,000 more mental health professionals.

The Tories would look at ways to make sure civil service recruitment more diverse, from the perspective of gender, race and social class.

A Conservative government would continue to fund graduate recruitment schemes for schools, the police, prisons, social care and mental health organisations, but would also provide seed funding for schemes to recruit older professionals from other sectors.

“Public services are dependent upon the public servants who run them,” states the manifesto, “which is why we would establish in law the freedom for employees to mutualise, where appropriate, within the public sector.”

Starting with the UK Government’s arm’s-length bodies, the Tories would start moving significant numbers of civil servants out of London and the south east, to cities around the UK. It would ensure that senior posts move too.

For the police, the Civil Nuclear Constabulary, the Ministry of Defence Police and the British Transport Police would be merged, and direct entry into the police would be expanded, including at chief officer level.

The entry requirements, training, management and career paths of prison officers would also be reformed.

The Tory Party wants to replace 13,000 existing technical qualifications with new qualifications, known as T-levels, in subjects including construction, creative and design, digital, engineering and manufacturing, and health and science.

It would establish new institutes of technology, “backed by leading employers” and linked to universities in every major city in England. These institutes would provide courses at degree level and above, specialising in technical disciplines, such as STEM, while also providing higher-level apprenticeships and “bespoke courses for employers”.

Employers would be at the centre of these reforms and local skills shortages would be dealt with through Skills Advisory Panels and Local Enterprise Partnerships working at a regional and local level.

The Tory Party would stick by its promise to create three million apprenticeships for young people by 2020 “driving up the quality of apprenticeships to ensure they deliver the skills employers need”.

Large firms could pass levy funds to small firms in their supply chain. Teaching apprenticeships could be sponsored by major companies, especially in STEM subjects.

The Conservatives would, they say, “produce the best programme of learning and training for people in work and returning to work in the developed world”. They would introduce a new right to request leave for training for all employees.

Presumably the new right differs from the current right under of the Employment Rights Act 1996, in that it extends to all employers and all employees, not just those organisations with 250 or more staff, and not just those employees with 26 weeks or more service.

Alongside this new right, the Party would introduce a “national retraining scheme”, the costs of which would be met by the state, with companies able to access the apprenticeship levy to support wage costs during the training period.

Cheese commented: “While we welcome the idea of a creating a national retraining scheme, we are concerned at the suggestion that companies will be able to use the apprenticeship levy to support wage costs as part of this initiative.

“A far better way to boost training opportunities for individuals and meet employers’ skills needs would be to reframe the apprenticeship levy as a more flexible training levy.”